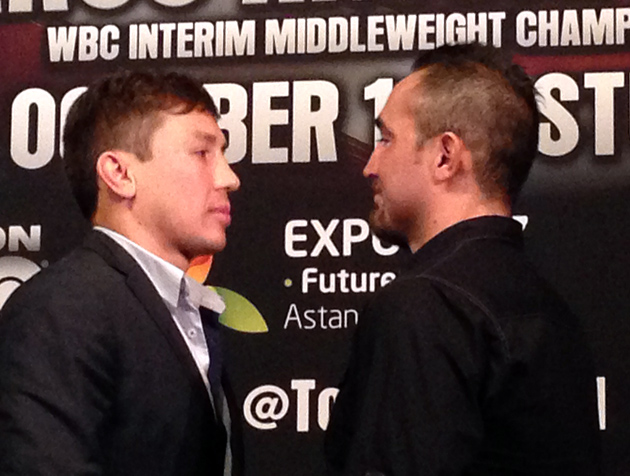 LOS ANGELES – Less than two years after his U.S. and HBO debut, Kazakhstan native Gennady Golovkin has fought five times on the American premium cable network, risen to the top of the middleweight rankings and established himself as one of the premiere action fighters in the sport.

For his sixth HBO appearance, scheduled for Oct. 18, the reigning WBA titleholder needed a big name. Golovkin and his team wanted WBC beltholder Miguel Cotto, the Puerto Rican star and future hall of famer who is recognized by RING magazine as the lineal middleweight champion.

However, Cotto is in position to possibly make a guaranteed eight-figure payday against Mexican star Canelo Alvarez next year and is no hurry to roll the dice against a power-punching natural middleweight in his prime like Golovkin.

Other “name” fighters of the middleweight and super middleweight division were also unavailable. Andre Ward, the 168-pound champ, is stuck in a legal battle with his promoter. Carl Froch and Julio Cesar Chavez Jr. are in on-and-off negotiations to face each other in January in Las Vegas. Peter Quillin, the undefeated WBO middleweight beltholder, has a mandatory defense set against Matt Korobov. Even Sam Soliman, the IBF 160-pound titleholder who doesn’t have much of a name in the U.S., is busy with controversial first defense against former champ Jermain Taylor.

So Golovkin’s next HBO appearance, which will take place at the popular StubHub Center in Carson, California, will be against Marco Antonio Rubio. Tom Loeffler, the managing director of K2 Promotions, which represents Golovkin, admits that Rubio was the fifth or sixth choice but he says the veteran contender from Mexico may be the right opponent for the undefeated middleweight’s Southern California debut.

“The fan reaction to this fight has been the biggest response we’ve ever encountered for a Gennady Golovkin fight,” Loeffler told RingTV.com after the kick-off press conference for the fight at El Paseo Inn.

“As soon as the fight was announced, fans began calling the K2 office for tickets and the response on Twitter, Gennady’s Facebook page and other social media has been tremendous. We’ve sold more pre-sale tickets for this fight (more than 1,000) than we have for any of his other fights.”

Part of the positive response could be the location of the fight. Golovkin, who has trained in Big Bear, California for the past five years, has the kind of aggressive boxing style that is appreciated by Southern California fans – many of whom are of Mexican descent, hence the official title of the event “Mexican Style” – and is perfect for StubHub, an 8,000-seat outdoor arena that has hosted its share of Fight of the Year candidates in recent years.

“This is the first time I’ve had fans thank me for bringing a fight to a particular venue,” said Loeffler, who’s worked with Golovkin since late 2011 and was instrumental in getting the 2004 Olympic silver medalist featured on U.S. television for the first time (Golovkin’s impressive five-round destruction of Gregorz Proksa on HBO in September 2012).

It also doesn’t hurt that Rubio, a 14-year veteran of 66 pro bouts, hails from Mexico and is known for his power. The 34-year-old holder of the WBC’s interim middleweight title has scored 51 knockouts in 59 victories.

“We finally have a guy who is a big puncher like Gennady, but is also more experienced,” said Abel Sanchez, Golvokin’s trainer. “Rubio has more knockouts than Gennady has fights. So I think local fans are excited about that, and they should be. I don’t think Rubio is going to back down, and if he does what he says he’s going to do we’re going to be treated to a heck of a fight.”

Sanchez also noted that Rubio is coached by one of the sport’s most respected young trainers, Robert Garcia.

“Robert’s going to help him a lot,” he said. Sanchez’s star fighter concurred.

“Rubio is a smart boxer, a smart fighter, and he has a smart team behind him,” Golovkin said. “I saw a lot of his fights (on tape and online). He won’t be scared.”

The knock on most of Golovkin’s better-known opponents to date is that they appeared to be intimidated once they stepped into the ring with him. Since stopping Proksa (who, to his credit, fought boldly but was dropped five times doing so), Golovkin has run through Gabriel Rosado, Matthew Macklin, Curtis Stevens and Daniel Geale in HBO-televised bouts – none of whom fought their usual aggressive fights against the defending WBA titleholder.

Rubio (59-6-1, 51 KOs), who has won 16 of his last 17 bouts since suffering a ninth-round stoppage to Kelly Pavlik in his first shot at major middleweight belts in early 2009, says he won’t be intimidated when he faces Golovkin. The awkward boxer-puncher, whose most recent loss was a 12-round decision to a much-heavier Julio Cesar Chavez Jr. in February 2012, says he isn’t expecting an easy fight on Oct. 18 but adds that he isn’t looking for easy fights at this stage of his career.

“I could have defended my (WBC interim) title 10-15 times in Mexico if I wanted to,” Rubio said through Garcia during the press conference, “but to be a real champion you have to fight the best. ‘GGG’ is the best middleweight in the world right now.”

Garcia, who is no stranger to preparing huge underdogs for high-profile fights, said training Rubio for Golovkin will be one of his “toughest challenges as a trainer,” adding that he views Golovkin as the best middleweight in the sport, “maybe one of the bet in history.”

Despite all the praise and the large group of fans that mobbed him on his way inside El Paseo and waited for him after the press conference in hopes that he would sign boxing gloves and other memorabilia, Golovkin was his usual humble and laid-back self at the media luncheon.

“Inside the ring, I’m GGG, but outside of it I am a gentleman,” said Golovkin, who refused to bad mouth Cotto (when some members of the media suggested the Puerto Rican legend is afraid to face him) and wouldn’t give any predictions on upcoming fights, such as Bernard Hopkins’ light heavyweight title unification bout against his former gym mate and sparring partner Sergey Kovalev.

“This is my first fight in California, my first in L.A. It’s very important for me and my career. I think I will have many fans there and I want to give them an amazing show.

“I’m not looking for the knockout. I don’t feel pressure to deliver a knockout, it’s just my style. I like big drama. We’ll get that on Oct. 18, either for him or for me, and that is my gift to the fans.”