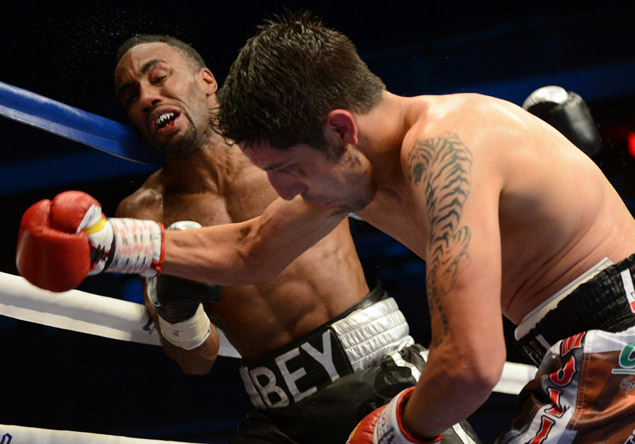 Although John Molina was not expected to win his last fight in April against Lucas Matthysse, the former lightweight nearly scored an upset in his junior welterweight debut.

Molina was eventually stopped by Matthysse in the 11th round of a war, having been dropped three times during a thriller in which he also floored THE RING’s number one-rated 140-pounder twice.

“To me, each fight is just like the last fight, no matter if I am a huge favorite or a big underdog. I always train the exact same…My last fight with Matthysse was definitely a great fight. Matthysse was looked at as this monster in the division and I was this newcomer coming into the division,” said Molina, 31.

“What I was able to take away from that fight is that I am one of the strongest guys at 140 pounds. He fought a hell of a fight and won because he was more experienced than me. But looking back at the fight, I made the mistake of stepping off the gas pedal a bit when I had him hurt and I should have gone in for the kill.”

Molina (27-4, 22 knockouts) will try to do just that on Sept. 13 when he returns to action against former lightweight titleholder Humberto Soto (64-8-2, 35 KOs) on the Floyd Mayweather Jr.-Marcos Maidana undercard at the MGM Grand in Las Vegas.

Molina spoke to media members during an open workout on Tuesday at the Robert Garcia Boxing Academy in Oxnard, Calif., which is named for Maidana’s trainer.

“I haven’t felt any ill effects from the Matthysse fight except for the bad taste in my mouth,” said Molina, whose fight will happen on a card stacked with fighters of Mexican descent that is happening on Mexican Independence Day Weekend.

“The competitor in me wants to come out victorious in each fight. Physically, I feel very strong and prepared going into this next fight. The stage is set for this fight and we will be a great appetizer for everyone to enjoy leading up to the main event.”

Molina is 3-3 with three knockouts in his past six bouts, the first of which was a first round stoppage loss to former titleholder Antonio DeMarco in September 2012.

During that time, however, Molina has also scored impressive knockouts in the fourth round over Dannie Williams in January 2013 and previously undefeated Mickey Bey in the 10th and final round six months later.

“I never look at an opponent as someone that I need to knock out or beat impressively,” said Molina, who also owns an 11th round stoppage of previously unbeaten Henry Lundy in July 2010.

“All I can control is how I perform and what I do best is to fight a good fight. Whether I win decisively or by knockout, as long as I get the victory and give the fans what they want to see is all I care about.”

Soto, 34, has won six straight bouts, one by stoppage, since being stopped in the fifth round by Matthysse in June 2012. Soto was last in the ring for a unanimous decision over Wilfrido Buelvas in June.

“I take all my opponents seriously and Soto is definitely not someone to take lightly,” said Molina. “Soto is a crafty veteran that has been in the ring with the best fighters and has won some and lost some. I go in to each fight with 100 percent focus and I am not looking past him in the least.”