J’Leon Love thought he would be jailed, dead before turning 18 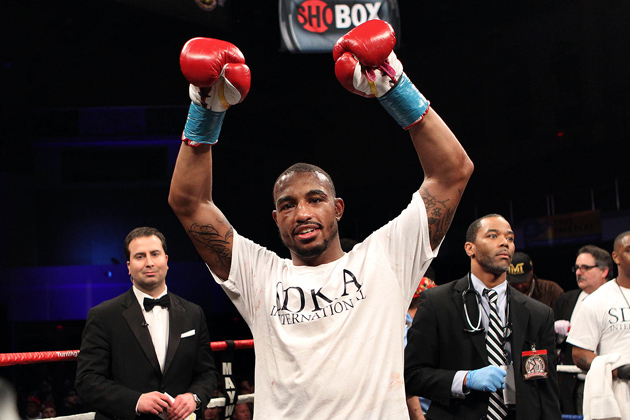 Undefeated super middleweight contender J’Leon Love was not sure that he would be alive today, let alone the headliner on Saturday’s Mayweather Promotions event against Rogelio Medina at Palms Casino Resort in Las Vegas.

“To be real with you, I thought that I would be locked up or dead before I turned 18,” said Love, whose bout with Medina also headlines a special Saturday broadcast of “ShoBox: The New Generation.”

Calling the event “a big honor,” Love (18-0, 10 knockouts) has grown accustomed to overcoming obstacles if not dealing with pressure as a native of the largely African-American suburb of Inkster, Mich., near Detroit.

Love credits his mother, Venita Love, as well as family members for helping him to escape the city’s crime-ridden streets as a teenager.

As a professional, Love credits Floyd Mayweather Jr. and the pound-for-pound king’s company for sticking with him in the wake of a controversy in May 2013.

That’s when Love rose from a sixth-round knockdown to win an unpopular split-decision victory over 160-pound rival Gabriel Rosado only to have it become a no-decision after Love failed his post-fight drug examination on the undercard of Mayweather’s unanimous decision over Robert Guerrero in defense of his RING and WBC welterweight championships at The MGM Grand in Las Vegas.

Since then, however, Love has reeled off three consecutive victories, two of them by stoppage. Love was last in action for a unanimous decision over former title challenger Marco Antonio Periban on the undercard of Mayweather’s majority decision against Marcos Maidana in May.

“Being that this is the first licensed event for Mayweather Promotions, for me to be the headliner, that just shows that they really believe in me,” said Love.

“It could have been any of the other fighters in the stable under their banner to be in the main event, but they picked me. It’s really a blessing and an honor to be in this position.”

Love has also demonstrated a maturity beyond his years, having taken responsibility for nine of his nieces and nephews left fatherless by the death of his brother in 2013.

Below are the full comments from Love to RingTV.com in advance of his clash with Medina (32-6, 26 KOs).

J’Leon Love on his checkered past:

“It’s a blessing, man, it really is. I can’t say that enough or too many times. It definitely is a blessing…I was just a typical guy growing up in the projects of Inkster, Michigan. We called it ‘The Saigon Projects.’

“Not too many people make it up outta there. There are a lot of deaths in Inkster, period. You know, it’s in the shadow of Detroit. A lot of things that happen in Inkster, Michigan, that get overshowed because of Detroit.

“My mom did the best that she could. My stepdad and my mother, they were behind me and my family got behind me once I stated boxing. My mom didn’t let me stop, you know?

“When there were days that I wanted to skip the gym and go and hustle on the corner, she was there to pull me back. So I was able to finally get into my niche as far as boxing, and I was able to travel and to see the world and different things.

“So, now, here I am years later making a difference. That just goes to show you that with the support my mother and my family in helping me to set goals and to put my heart and dedication into the sport that I love, you just never know what outcome you can get from it.”

On when it first hit him that he would be the headliner:

“It’s a blessing to be in the position that I’m in. But I didn’t really feel the full impact until I walked into the Palms yesterday to grab some business there as far as the rooms and stuff for my family.

On the significance of the inaugural event:

“Obviously, being with Mayweather Promotions, this is a new leap to everything for us as far as what we’re being able to do as a promotional company.

“For all the fighters under the banner, obviously, we want to continue to go out there and to win. We want to put on good shows to show that Mayweather Promotions is not only the past, but the present and the future.

“Not only that, but I am headlining, so, for me, that is a lot of responsibility. There are a lot of great fighters on the undercard as well. So we just want to go out there and give the fans what they want to see, and that’s some great boxing matches.

“Obviously, I feel like a pioneer, and we’re setting a bar here. Being that this is the first licensed event for Mayweather Promotions, for me to be the headliner, that just shows that they really believe in me.

“It could have been any of the other fighters in the stable under their banner to be in the main event, but they picked me. It’s really a blessing and an honor to be in this position.”