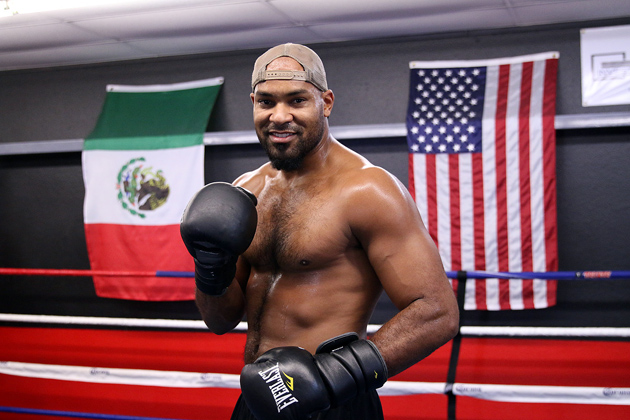 Gerald Washington is the latest former football player to try to make it big in professional boxing.

Except he’s not quite like the rest of them.

Imports from the gridiron to the squared circle have ranged from part-time hobbyists like Tom Zbikowski, to sideshows like Ed “Too Tall” Jones, to moderate successes like Charlie Powell and Seth Mitchell. It’s true that boxing isn’t often blessed with the types of gifted athletes that find their way into shoulder pads, but athleticism doesn’t immediately translate to fighting talent.

Washington has impressive credentials like his two-sport predecessors. The 32 year old was a tight end and defensive end for the USC Trojans for three seasons, winning three Rose Bowls, before spending time on the Buffalo Bills and Seattle Seahawks practice squads as a professional.

But before all of that, and before his time in the US Navy, he dreamed of being the heavyweight champion of the world.

“It was either karate or boxing. I wanted to be the Karate Kid until I saw Mike Tyson and Julio Cesar Chavez, and I’m half black and half Mexican, so that’s who I wanted to be,” Washington told RingTV.com.

Washington started boxing as a 90-pound youngster at the Boys and Girls Club in Vallejo, California as part of an after-school program. His free time on weekends would be spent watching the fights with his family members, who would throw pay-per-view parties for the big heavyweight clashes.

It was evident that Gerald wouldn’t be a strawweight for long thoughÔÇöhe would be growing into a heavyweight body himself, and athletic individuals with a 200-plus pound frame in this day and age tend to find their way onto a football field.

At the same time, passionate individuals gravitate to what they love, and after his playing career wrapped up, he headed straight to the boxing gym and began sparring again.

One day, he was in the gym with his friend and fellow former football player Dominic Breazeale, and was sparring Malik Scott. Al Haymon’s team was set to visit the gym that day with the intention of inking the former Olympian Brazeale to a contract. Washington did so well with Scott that day that by the time Haymon’s representatives left the gym, he’d signed a contract too.

“It’s a blessing to have a guy like that backing you, because I’ve seen guys who don’t have that backing, and it’s hard for them to get their careers going,” said Washington.

Breazeale and Washington’s careers have mirrored one another’s, as a result. Friday night, Washington will take on Nagy Aguilera in the co-feature of the “Golden Boy Live!” telecast airing on Fox Sports 1. Aguilera’s last opponent? Breazeale.

Luckily, when he found out he would be fighting Aguilera, Washington already had plenty of footage of him on his PVR. He had his last fight recorded so he could watch his friend.

As you would expect, Washington is a big proponent of film study.

“It gives me an idea of his tendencies and what I can open him up with. It doesn’t tell everything, but it does give you an idea of what the guy’s going to do. In my mind I’ve already fought this guy a thousand times, so now I can get in there and do my thing,” said Washington (13-0, 10 knockouts).

Aguilera represents a significant step up for a fighter without a lengthy amateur background and with only 13 professional bouts. Though he’s now considered a gatekeeper of sorts, that label hasn’t been on him for very long. It’s taken upper echelon heavyweights and big punchers to stop him in the pastÔÇöSamuel Peter and Chris Arreola.

The same could be said for Sherman Williams, whom Washington fought and beat when he was just a seven fight novice. At the time, Williams was coming off a loss to 17-0 Robert Helenius, a top-10 heavyweight.

Perhaps it’s the inherent confidence built in a man who spent time in a league America views as the pinnacle of athletic achievement, but “El Gallo Negro” sees no reason to believe he should be moved along slowly. He’s not like the rest of them.

“Learning how to compete with the best athletes in the country definitely puts me a couple steps ahead of fighters in the ring. I’m way stronger than anybody I’m in the ring with, due to my background in football. My strength base is way higher than any boxer out there,” said Washington.

“But I’m bringing something different to the table than other guys do. I have skill and athleticism, and I have experience now. We’re just trying to keep showing everybody that we’re not just football players. We’re really rising to the top.”