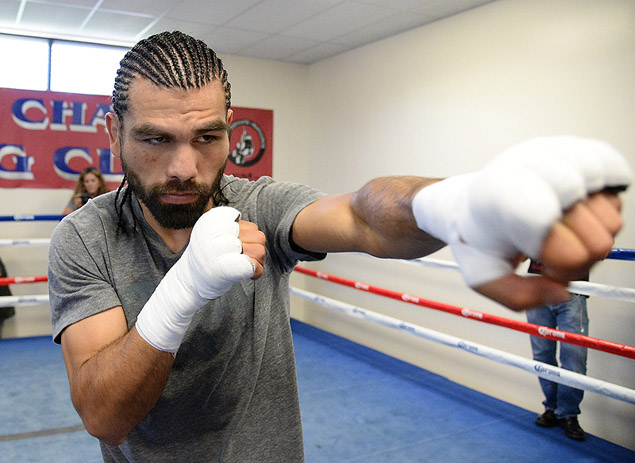 Alfredo Angulo has likened himself to a dog that is learning new tricks from trainer Virgil Hunter.

Nicknamed “Perro” (“Dog” in English), Angulo (22-4, 18 knockouts) plans to employ those abilities against James De La Rosa (22-2, 13 KOs), whom he will face in a 162-pound bout on Sept. 13. The fight represents his middleweight debut in support of Floyd Mayweather Jr.’s rematch with Marcos Maidana at the MGM Grand in Las Vegas.

Coming off consecutive 10th round stoppage losses to junior middleweights Erislandy Lara and Alvarez in June 2013 and March, respectively, Angulo will be in his fifth fight under Hunter against De La Rosa.

“We’ve come in early to the camp. Virgil is working with me,” said Angulo during a Wednesday conference call. “We’ve changed a lot of things from the fight with Canelo. You’ll see on Sept. 13, the normal dog in the ring.”

“I know that he’s not the same fighter as I am. I don’t feel pressure,” said Angulo. “On Sept. 13, you will see the regular dog in the ring. You will see that the dog is back and that he will start his new plans for 160.”

Although he dropped Lara twice during their fight, Angulo blamed weight loss, in part, for his sub-par performance against Alvarez.

“As far as the Lara fight, it was a great experience. I showed the people that didn’t give me an opportunity and that didn’t give me a chance that Perro is always going to be here and give the fans the big fights. Honestly, in the Canelo fight, I can’t say that I learned anything because it wasn’t me,” said Angulo.

“It wasn’t the [Angulo] that you all know and I didn’t feel the strength to be able to give you the performance that I would have wanted…I’ve been saying it all along that I was going to stay at 154 until my body said otherwise. It’s not a struggle. I can still make 154 but not comfortably, so that’s why the jump to 160.”

Before facing Lara, Angulo had won two fights since being stopped by James Kirkland in November 2011. The two victories were comprised of a 56-second knockout of Raul Casarez and a unanimous decision over Jorge Silva in November and December 1012, respectively.

Between the Kirkland and Casarez fights, Angulo had been forced to take a long layoff due to an eight-month stay at the El Centro Detention Center. Located less than 14 miles from the U.S.-Mexico border, Angulo was retained in the detention facility for having “overstayed his U.S. visa,” according to his manager and counsel, Michael Miller.

Angulo was released in August 2012 after winning his court case.