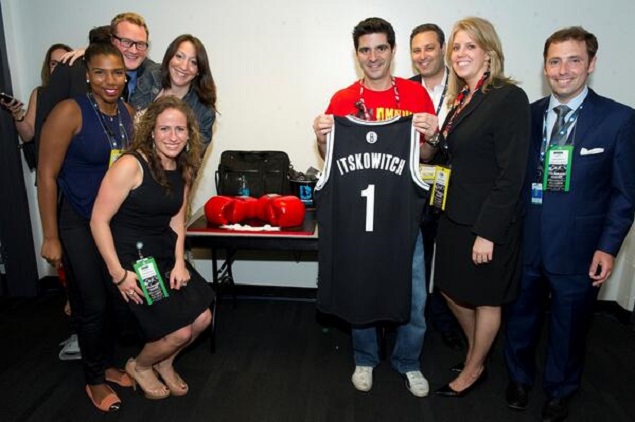 New COO of Boxing for Roc Nation Sports David Itskowitch said the company’s winning bid of more than $1.9 million for the right to promote the Peter Quillin-Matt Korobov fight in November had “the desired effect.”
With what he called “a positive, immediate and dramatic impact,” Istkowitch, the former COO of Golden Boy Promotions, drew the attention of the boxing community to the 16-month-old company founded by Jay-Z.
Itskowitch shared his thoughts with RingTV.com during a Wednesday Q&A regarding his winning bid of $1,904,840 at WBO headquarters in San Juan, Puerto Rico, which beat the $1,207,000 by Golden Boy Promotions’ Ramiro Gonzalez and $515,000 by Top Rank Promotions’ Carl Moretti.
The Quillin-Korobov middleweight title bout has been tentatively targeted for Nov. 8 either in New York City or Washington, D.C., on a network to be determined.
Itskowitch discussed the potential date conflict with an HBO-televised light heavyweight unification bout between IBF/WBA titleholder Bernard Hopkins and WBO counterpart Sergey Kovalev that reportedly could happen on the same date.
In addition, Hopkins-Kovalev, whose respective promoters are Golden Boy and Main Events, reportedly could happen in either Atlantic City or at Barclays Center in Brooklyn, where Quillin (31-0, 22 knockouts) has competed under the Golden Boy banner in two of his past four fights.
Quillin debuted at Barclays Center in October 2012 when he scored six knockdowns during a unanimous decision win over previously unbeaten Hassan N’Dam N’Jikam to earn the WBO belt.
Korobov (24-0, 14 KOs) could also be a big attraction at Barclays, as the owner of the Brooklyn Nets is Russian Mikhail Prokhorov. In June, Barclays Center was a major attraction to the Russian community when Ruslan Provodnikov lost his WBO 140-pound title to Chris Algieri.

Michael Yormark, president and chief of branding and strategy for Roc Nation, is the twin brother of Brett Yormark, the CEO of Barclays Center.

Itskowitch discussed the aforementioned topics in the following Q&A.

RingTV.com: Have you decided whether the fight will be in Washington, D.C., or New York?

David Itskowitch: We’re currently working on it. Ideally, in a perfect world, we’d like to have it in New York but it’s not set yet.

RingTV.com: Was the size of the your purse bid amount a statement and did you achieve the desired effect?

DI: I think that it did have the desired effect. As I have said, our goal is to make a positive, immediate and dramatic impact on the sport and I think that we did all three in one day.

RingTV.com: How would you characterize your relationship with those who were present, including Carl Moretti and Ramiro Gonzalez and what do you recall of their reaction to your presence?

DI: When I first walked in, everyone was a little confused. [ESPN.com’s] story [about Itskowitch’s hiring] had not broken yet when I walked in.

A WBO employee said to me that, “Carl and Ramiro are having breakfast down the street; you should go and see them.” So I walked over to where they were having breakfast and I sat down. I don’t know what they thought when they saw me. There may have been some rumors that I was joining Roc Nation Sports because I had been getting some phone calls about it.

I think that it was mostly confusion at first and that maybe they thought that I was in Puerto Rico on vacation and just decided to stop by. As we’re sitting there, the [ESPN] story came out and then they must have realized then that I was there to bid but it was friendly throughout. I’ve known Carl for almost 20 years and I worked with Ramiro for six years, so everything was good. It wasn’t contemptuous or stressed. We all rode in the same car from the purse bid together.

I was driven back to my hotel and they went out to lunch afterward but I couldn’t go because I had a flight to catch. It was a very friendly atmosphere afterward.

RingTV.com: Do you anticipate that similar atmosphere, moving forward, through the promotion of Quillin-Korobov?

DI: I like to think I have the ability to be able to work with everyone. When I started working for Golden Boy, a lot of people said, “Well, people are going to hate you,” but I managed to maintain all of my relationships throughout my tenure at Golden Boy. I don’t see why this would be any different. I am still me. I’m still the same person that everyone knows, so I don’t anticipate that there will be any problems.

But it’s boxing and when you’re working on a show with another promoter, there are divergent goals between parties. That can be difficult and it can stress things. I think that at the end of the day, it will be a positive experience for other promoters to work with us.

RingTV.com: Do you know which network will be televising Quillin-Korobov, given that HBO has Hopkins-Kovalev?

RingTV.com: What are your thoughts on Barclays Center, given that Brett Yormark is Michael Yormark’s twin brother?

DI: I think that boxing’s going to continue to be a very important part of their programming. I think that just based on the fact that we’re a New York promoter, that’s something that’s going to be attractive to them.

The fact that they’re brothers is a nice thing and it probably makes things easier as far as doing business or, on a bad day, it could make things harder [chuckles.]

In all seriousness, I think that Barclays Center wants the best programming that they can get for their building and they’re going to continue striving for that, whatever event that is.

RingTV.com: Does the fact that two of Quillin’s biggest victories over N’Jikam and Guerrero were at Barclays make that venue a more attractive sight?

DI: It does. Peter has a history there. There’s continuity there. Peter lives in Brooklyn. New York is his adoptive home. Korobov also has a significant fan base in Brooklyn among the Russian community, so the fight does make sense at Barclays Center.

RingTV.com: Is the fight going to take place on Nov. 8?

RingTV.com: Do you see a potential conflict with the Hopkins-Kovalev and Quillin-Korobov fights each being targeted for the Nov. 8 date and each being a consideration for New York?