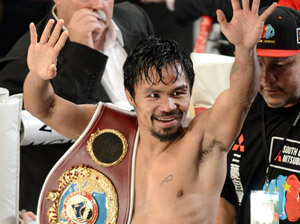 Algieri (20-0, 8 knockouts) will challenge for the WBO welterweight belt held by Pacquiao (56-5-2, 38 KOs) on Nov. 22 on HBO Pay-Per-View at the Venetian Casino in Macao, China, where Pacquiao unanimously decisioned Brandon Rios in November.

The first stop in the estimated 27,273-mile tour is scheduled for Monday at the Venetian Macao, with expected participants to include Freddie Roach and Tim Lane, trainers of Pacquiao and Algieri, respectively, as well as Top Rank CEO Bob Arum and Algieri’s promoters, Joe DeGuardia of Star Boxing and Artie Pelullo of Banner Promotions.

Pacquiao, 35, was last in action in April, dethroning Tim Bradley by unanimous decision to regain the belt he lost by split decision to Bradley in June 2012. Between his first bout with Bradley and the Rios fight, Pacquiao lost via six-round stoppage in December 2012 by Juan Manuel Marquez, against whom Pacquiao is 2-1-1.