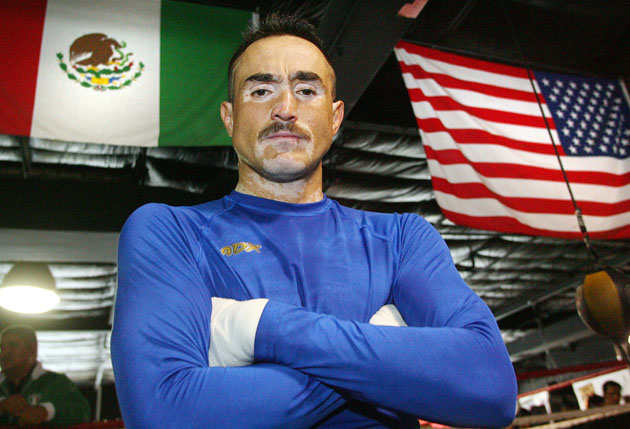 Marco Antonio Rubio plans to dictate “a real Mexican-style fight” to WBA middleweight titleholder Gennady Golovkin when they meet on Oct. 18 at StubHub Center in Carson, Calif., on HBO.

“It will be a tremendous fight,” Oswaldo Kuchle of Promociones Del Pueblo, which handles Rubio, stated in a Tuesday press release sent out by Golovkin’s K2 Promotions. “I can assure you that Rubio will make this a war.”

Golovkin (30-0, 27 knockouts) will pursue his 12th defense and his 18th straight knockout victory against Rubio (59-6-1, 51 KOs), a winner of six straight fights, five of them by knockout, since falling by unanimous decision to Julio Cesar Chavez Jr. in February 2012.

Rubio, who turned 34 in June, fights out of Torreon, Mexico, trains in Oxnard, Calif., under former titleholder Robert Garcia, and is 16-1 with 14 knockouts in his last 17 fights.

“Marco Antonio Rubio is among the toughest fighters in boxing,” K2 managing directer Tom Loeffler said. “This battle with Gennady should provide fireworks from the opening bell.”

Rubio owns stoppage wins over former titleholder Carlos Baldomir, David Lemieux and Canelo Alvarez’s older brother, Rigoberto. Rubio has gone the distance in a split-decision loss to ex-beltholder Kassim Ouma and was stopped in the ninth round by former undisputed champion Kelly Pavlik.

“I’m excited to fight another world champion,” Rubio, last in action for a 10th-round stoppage of Domenico Spada in April, stated in the press release. “I always accept the biggest challenges, and without a doubt, this will be the greatest of my career. I will show Golovkin a real Mexican Style fight on Oct. 18.”

Last month, Golovkin scored a third-round technical knockout over Daniel Geale at New York’s Madison Square Garden, representing the fourth time Golovkin has fought in New York in his past seven fights, and the fifth time the native of Kazakhstan has fought on the East Coast.

“We’re looking forward to promoting the West Coast debut of Gennady Golovkin,” said Loeffler. “His growing popularity across the country compels us to bring this highly anticipated fight to the StubHub Center, which has hosted so many exciting boxing events in recent years.

Golovkin will head to the mountains of Big Bear, Calif., next week to begin preparations under trainer Abel Sanchez, but will be fighting in California for the first time.

“I’m very excited to fight in California,” Golovkin stated in the press release. “I always enjoy attending fights at the StubHub Center and look forward to a Mexican Style fight against Marco Antonio Rubio.”