Lem’s latest: Golovkin-Rubio close to being made for Oct. 18 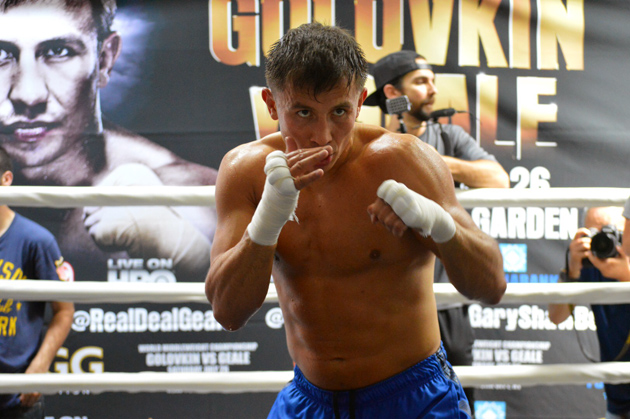 A deal is “very close” for WBA middleweight titleholder Gennady Golovkin to face Marco Antonio Rubio on Oct. 18 at The StubHub Center in Carson, Calif., his trainer, Abel Sanchez, informed RingTV.com on Monday.

Sanchez made his assertion after having spoken to Golovkin’s handler, Tom Loeffler, of K2 Promotions, who wrote in a text message to RingTV.com that “It is close.”

“It’s not going to be for sure until tomorrow, so he tells me not to say that it’s done,” said Sanchez of the HBO-televised bout. “It’s very close, and it’s agreed to terms-wise and on the venue, but it’s not completely signed.”

Golovkin (30-0, 27 knockouts) will make the 12th defense of his belt in pursuit of his 18th straight knockout against Rubio (59-6-1, 51 knockouts), a winner of five of his past six fights by knockout since falling by unanimous decision to Julio Cesar Chavez in February 2012.

Last month, Golovkin scored a third-round technical knockout over Daniel Geale at New York’s Madison Square Garden, representing the fourth time he has fought in New York in his past seven fights, and the fifth time the native of Kazakhstan has fought on the East Coast.

“The West Coast is a possibility. That’s probably the direction that we’re leaning toward because Gennady has fought now, I think, five times on the East Coast and so it would be time to bring him over here,” said Loeffler, during an earlier interview with RingTV.com.

“He trains in Big Bear, Calif. and we’re based in Los Angeles. Plus, we’ve had a big demand from the fans out here on the West Coast to bring him out here, so we’re looking at fulfilling that.”

A well-traveled fighter who turned 34 in June, Rubio owns stoppage wins over former titleholder Carlos Baldomir, David Lemieux and Canelo Alvarez’s older brother, Rigoberto. He has gone the distance in a split-decision loss to ex-beltholder Kassim Ouma and was stopped in the ninth round by former undisputed champion Kelly Pavlik.

“Chavez went 12 rounds with Rubio, and he’s a tough kid that went nine rounds with Pavlik. I expect him to be ready for what he saw in New York from Gennady against Geale,” said Sanchez.

“So I expect him to be aware of what can happen because of his experience. I expect a tough fight, but I’m looking for Gennady to put on a show in California.”

Cruiserweight Ola Afolabi (21-3-4, 10 KOs), who has lost twice to and battled to a draw with WBO beltholder Marco Huck, has been named the mandatory challenger to the IBF title owned by RING champion Yoan Hernandez (29-1, 14 KOs), according to a release by Afolabi’s promoter, K2 Promotions.

The bout must happen by Dec. 31, according to the release.

“We’re excited that Ola is now the mandatory challenger for the IBF cruiserweight championship,” said Loeffler. “Ola has proven to be one of the best cruiserweights in the world, and we strongly believe that he will bring home the IBF world title in this fight.”

Hernandez is coming off Saturday’s split-decision over Firat Arslan, and Afolabi, last month’s third-round knockout of Anthony Caputo Smith that represented his second consecutive win since falling by majority decision to Huck in June 2013.

“I’m thrilled to be challenging for the IBF world title,” said Ofalabi, who has also lost to Huck by unanimous decision in December 2009 and battled him to a draw in May 2012. “Tom and K2 have done a great job promoting me and putting me in this position, and I will take the title from Hernandez.”