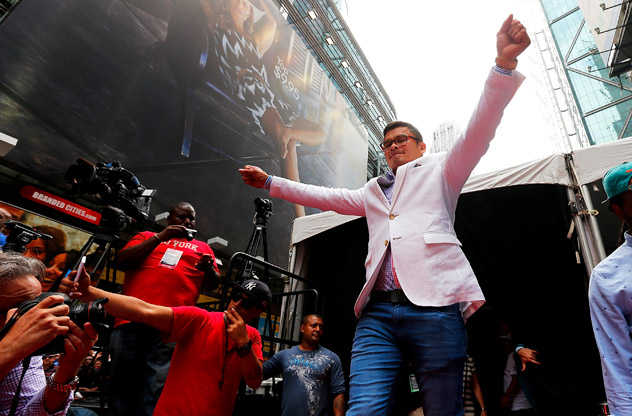 Marcos Maidana makes his entrance at New York’s Times Square for the first stop of a publicity tour for his rematch against Floyd Mayweather Jr. Photo by Mike Stobe/Getty Images.

Marcos Maidana has made it perfectly clear that he plans to pursue the stoppage win in his Sept. 13 rematch against RING welterweight champion Floyd Mayweather Jr., who defeated him by majority decision at the MGM Grand Garden Arena in Las Vegas in May.

Meanwhile, Mayweather (46-0, 26 knockouts) has expressed similar zeal for the knockout against Maidana (35-4, 31 KOs), against whom he will also defend his WBA and WBC 147-pound belts on Showtime Pay-Per-View.

During Saturday’s telecast of Kell Brook’s majority decision over Shawn Porter at the StubHub Center in Carson, Calif., Maidana vowed to be more prepared for Mayweather during an interview with Showtime’s Brian Kenny.

Marcos Maidana on what he learned from being in the ring with Floyd Mayweather Jr.:

“I definitely didn’t expect this…I thought Mayweather would be a little faster but that wasn’t the case. I got to him. That’s what I basically noticed, that he wasn’t that fast as I expected him to be.”

On why he will have more success in the rematch:

“The first time, I had a little more anxiety. I have more time to train this time. Now I know Floyd much better and that’s going to be key for the second fight.”

On where he thought he was on the scorecards at times in the fight:

“I feel that I was totally under control through the fifth or sixth round. I felt that he picked it up a little bit after the sixth round and that’s where, maybe, he went up on the scorecards a little more. But what I need to do in the second fight is attack a little more.”

On the increased friction between Maidana and Mayweather in advance of the rematch:

“I think that the first fight was very even and people have had their questions about this fight after the first fight that happened. The second fight will definitely take those question marks out.

On his final thoughts looking forward to the rematch:

“We’re not going to change that much. I do want to correct a couple of errors that we committed during that fight and that’s what we’re going to do.”

KEITH THURMAN WANTS AMIR KHAN TO ‘PROVE HIMSELF’ AS A WELTERWEIGHT

Welterweight contender Keith Thurman (23-0, 21 KOs) said he would like to face former titleholder Amir Khan during an intervew with Showtime’s Jim Gray on Saturday night.

“Amir Khan is interesting. I’ve watched his career for a long time. Now that he’s a welterweight, I would like for him to prove himself and to step into the ring.”

Thurman was last in action for a third round stoppage of Julio Diaz in April and Khan (29-3, 19 KOs), a unanimous decision over former titleholder Luis Collazo in May.

Argentine welterweight Luis Carlos Abregu will return to the ring against an opponent to be determined in support of Manny Pacquiao’s WBO welterweight title defense against Chris Algieri in Macao, China on Nov. 22, according to a release from Top Rank Promotions publicist Ricardo Jimenez.

Abregu (36-1, 29 knockouts), 30, was last in action in April, when he ended a near one-year ring absence with an eighth round TKO of previously unbeaten southpaw Jean Carlos Prada.

“He might not be the most feared boxer in the world,” said Sean Gibbons, Abregu’s agent, “but he is on that short list.”

Chaves was last in action losing by disputed ninth round disqualification to Brandon Rios.

“Abregu’s really simple,” said Gibbons. “He has a motto that he will fight anybody.”

“If not at 147, Abregu is willing to up to 154 to seek a world title,” said Pablo Martinez, his manager. “Why not think of 160, where Miguel Cotto seems to be looking for a foe for his next fight?

Middleweight prospect Antoine Douglas (14-0-1, 9 KOs) will return to the ring against an opponent to be determined on Oct. 24 at the Ukrainian Cultural Center in Somerset, N.J.

Last month, Douglas survived some treacherous moments in the eighth and ninth rounds of a 10-round majority draw against Michel Soro.