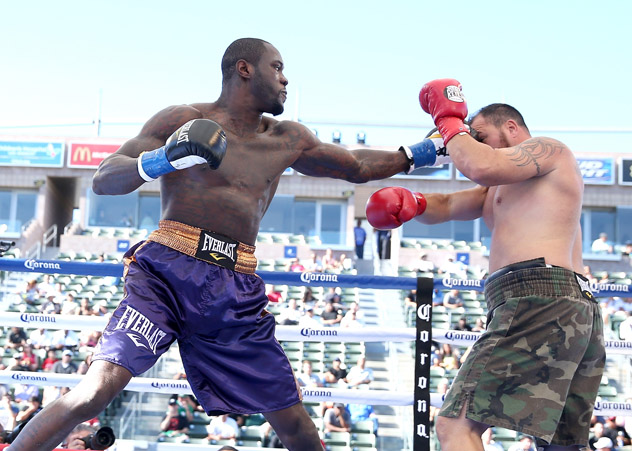 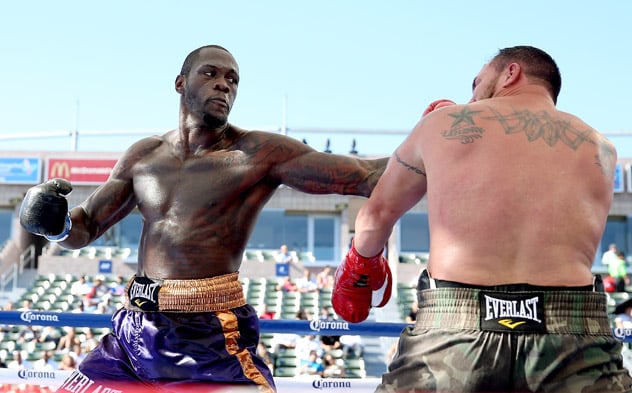 Heavyweight contender Deontay Wilder scored knockdowns in the third and final rounds of a fourth-round technical knockout over journeyman Jason Gavern on Saturday at The StubHub Center in Carson, Calif.

“I knew what this fight was, and what it meant, and so we did what we came to do,” said Wilder, in a text message from ringside to RingTV.com. “What we wanted to do was to get some rounds in and to get the win. We did that, and nothing more.”

Wilder had an advantage of 57-to-16 in overall punches, including 18-to-14 in power shots and 39-to-2 in jabs against Gavern, who advised his corner while on his stool to have referee Jack Reiss stop the fight prior to the fifth round. Each of the knockdowns were the result of right hands to the head by Wilder.

“I found out tonight, though, that people question my stamina. They ask if I can go past four rounds. But when I try to prove that I can do that, then, suddenly, they don’t want it,” said Wilder.

“They start to call for the knockout. Fans are funny to me. My point has been proven that you can’t please everyone and people simply prefer the early KO instead of the later round action.”

Wilder was coming off a 96-second knockout of Malik Scott in a WBC title eliminator bout in March. Defeating Scott made Wilder the mandatory challenger to face WBC beltholder Bermane Stiverne (24-1-1, 21 KOs) in a bout that is being targeted for November.

In his previous fight, Gavern, 37, had won a majority decision over faded former multi-division titleholder James Toney in a three-round bout that was part of the British “Prizefighter Tournament” series, in which Gavern won two out of his three bouts on the same night.

Wilder-Gavern took place on the Showtime Extreme portion of a tripleheader headlined by Shawn Porter’s IBF welterweight title defense, which he lost by majority decision to Kell Brook.

Also on the card, two-division titlewinner Jorge Linares (37-3, 24 KOs) earned his sixth straight victory and his fourth knockout during that run with a second-round stoppage of lightweight rival Ira Terry (26-12, 16 KOs). Linares was fluid with his punches throughout before dropping Terry for good with a vicious counter-right hand at the 1:21 mark.

Breazeale registered two knockdowns during a second-round stoppage of Billy Zumbrun (27-14-1, 16 KOs), lightweight Campbell did the same at 1:15 of the second against Steve Trumble (13-31, 8 KOs), super middleweight Smith stopped Abraham Hernandez (5-1, 3 KOs) at 2:59 of the first round, and middleweight Quigley scored a third-round knockout over Fernando Najera (1-4)