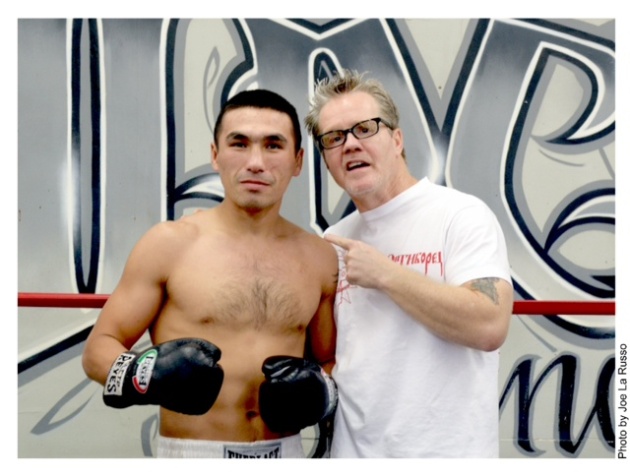 SANTA YNEZ, Calif. – Despite giving up five inches in height and facing a fighter who had knocked out his previous five opponents, Denis Shafikov remained unfazed.

It was Shafikov who used his boxing skills and his perseverance to pull off a surprise ending against fellow Russian lightweight standout Rustam Nugaev.

Shafikov absorbed Nugaev’s best punches before breaking down the hard-hitting fighter, eventually stopping him in the ninth round at the Chumash Casino Resort. With the victory, Shafikov becomes the mandatory challenger for the IBF lightweight title, which is held by Miguel Vazquez.

Prior to facing Shafikov, Nugaev had won his previous six fights in a row, the last five by knockout. Ironically, Shafikov was coming off a 12-round unanimous decision loss to Vazquez in Macau, China on February 22.

Nugaev stalked the southpaw around the ring early on in the fight, connecting very little with the punches he threw. On the other hand, Shavikov began to find a rhythm, slipping Nugaev’s punches and countering with left crosses to the head and body.

From the third round, Nugaev had to deal with a cut on the bridge of his nose that was caused by a punch and a cut above his left eye.

Nugaev mounted a rally in the third and fourth rounds, where he was able to catch Shafikov with right crosses and an occasional uppercut to the head of Shafikov.

Undaunted, Shafikov withstood Nagaev’s best punches to begin breaking Nugaev down. He would either side-step Nugaev to land to the body or continued to slip under Nugaev’s punches to counter back to the head.

As the bout progressed, Nugaev’s eye looked grotesquely worse, as it began to slowly close and blood was oozing out of the cut. Nugaev’s lack of attack to the body allowed Shafikov to move around the ring and increase his punch output after each round.

After consulting with the ringside physician prior to the ninth round, referee Jack Reiss kept a close eye on Nugaev. After Shafikov landed a combination that culminated with a left hand to the head, Reiss saw enough and stopped the bout at 1:16.

In the co-feature bout, junior lightweight prospect Jose Pedraza stopped Juan Carlos Martinez after the end of the sixth round.

Pedraza possessed more pedigree of the two fighters. After Martinez was able to score with lead and counter right hands to Pedraza’s head, the Puerto Rican fighter began to take control of the fight.

Pedraza began to assert himself more in the fight by initiating exchanges, which allowed him to beat Martinez to the punch. He began landing more at will with left hooks to the head of Martinez, mixing in some punches to the body.

As the bout progressed, Martinez’s punch output dropped. It dropped considerably in the sixth round, where Martinez did little to engage, fighting more cautiously and defensively.

– In the opening bout, Edwin Sandoval (3-1, 1 KO) won a one-sided four round unanimous decision over Lyonell Kelly (0-4-1). All three judges scored the bout 40-36 in favor of Sandoval.

Francisco A. Salazar has written for RingTV since October of 2013 and has covered boxing in Southern California and abroad since 2000. He also covers boxing for the Ventura County (CA) newspaper, Boxingscene.com, and Knockout Nation. He can be reached by email at [email protected] or on Twitter at FSalazarBoxing