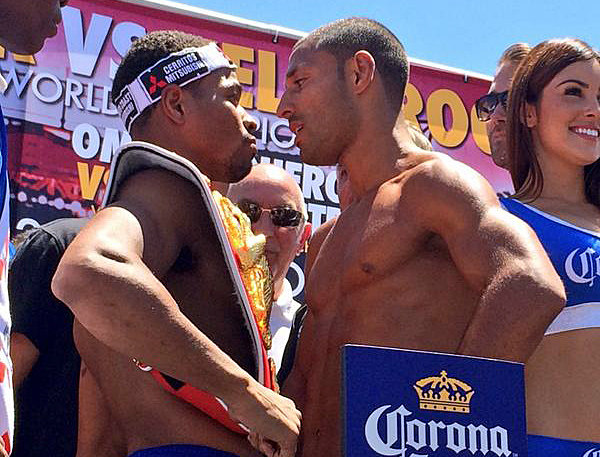 Welterweight beltholder Shawn Porter had to strip down to do it but he weighed in at 146.75 pounds at Friday’s weigh-in for his IBF title defense against undefeated British challenger Kell Brook, who weighed 146.5. Porter-Brook headlines a Showtime tripleheader in Carson, Calif., on Saturday.

Porter (24-0-1, 15 knockouts), of Akron, Ohio, enters the bout a solid favorite among American odds makers, perhaps due to his devastating KO title defense against former beltholder Paulie Malignaggi in April.

“Fans know what kind of fight I bring,” Porter told Showtime’s Brian Custer after weighing in at StubHub Center, the site of tomorrow’s Golden Boy Promotions card. “I’m confident, not cocky. I’ll be exciting but I’ll also win the fight.”

“I’m coming here to win,” he told Custer after an intense staredown with Porter. “I’m mentally and physically ready. It’s my time. He’s getting taken out.”

Anthony Dirrell, who challenges WBC super middleweight titleholder in the co-featured rematch of the show, also predicts a KO victory. The unbeaten talent dropped Bika in their first bout last December en route to a draw verdict he believes he should have won.

Bika, a rugged 35-year-old veteran who has never been stopped, took exception to those words.

Omar Figueroa Jr. made 135 pound for what he says is his last lightweight bout, a WBC title defense against Mexico City veteran Daniel Estrada (32-2-1, 24 KO), who weighed 134.5.

The defending beltholder, who has made no secret of his struggle to make the lightweight limit, says Friday was the last time he boils down to 135 pounds.