Francisco Santana: from prospect to opponent to contender 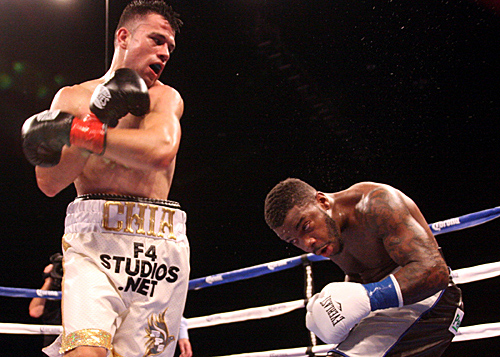 Standing in the middle of the Shape-Up Boxing Gym in Baguio City, Philippines, Francisco Santana was surrounded by champions on either side. To his left was Manny Pacquiao, then getting ready to face Timothy Bradley for the first time, finishing up a session on the pads with Freddie Roach.

To his right was Amir Khan, whom he was originally flown out to spar with for a Lamont Peterson rematch that would be canceled in a few weeks time due to Peterson failing a pre-fight drug test.

It was May of 2012 and Santana hadn’t fought since October of the previous year, when he lost a unanimous decision to an unbeaten prospect named Jermell Charlo. Admittedly the junior middleweight from Santa Barbara, Calif. wasn’t in peak confidence, having fought sparingly since being stopped in five rounds by Karim Mayfield in 2009.

Santana only got the call to head out to the mountain town of Baguio after his gym mate David Rodela, a long-time Pacquiao sparring partner, said he couldn’t make it. For Santana, it’d be the experience of a lifetime.

“I actually came back from the Philippines a different person,” said Santana (20-3-1, 9 knockouts), who fights Wilfredo Acuna (15-15, 12 KOs) tonight at the Chumash Casino in Santa Ynez, Calif.

“It was a privilege to be able to spar with Amir Khan, train with the best fighter in the world in my eyes, Manny Pacquiao, and to see how he works. I saw, ‘Man, I’m doing the exact same thing they’re doing.’ I felt like that definitely gave me a big confidence boost.”

He hit the same punching bag as the world champions, did the same training regimen and could hang with Khan in sparring. In a sport where the condition of the mind is can be the difference between a contender and an opponent, a bit of confidence goes a long way.

Since returning from the Philippines, Santana has been on a tear, winning eight straight fights, including decisions over former title challenger Freddy Hernandez, former WBA junior middleweight titleholder Joachim Alcine, and, in his most recent outing in June, an upset win over previously unbeaten prospect Eddie Gomez on ShoBox.

“When I came back I realized something about fighting; you gotta love what you’re doing. Who cares if you win some and lose some, just go in there and put it all on the line. Ever since then I don’t even think about winning or losing, I go in there to have fun and beat the other guy’s butt, basically.”

Santana, known as “Chia” to his friends, turned professional at age 19 after a limited amateur career and won his first eight fights before losing a split-decision to Mayfield in their first encounter in 2008.

Much of Santana’s winning streak had been the product of matchmaking.

Hernandez and Alcine were past their primes and were rebounding from losing streaks. Against Gomez, there was no mistaking that Santana was the “B-side.” Through the early rounds, the 21-year-old Gomez’s class showed, reinforcing the perception that he was destined to win.

“My coach came up with Plan A, Plan B, Plan C, and when Plan A didn’t work, we started taking the fight to him,” remembers Santana.

Santana became aggressive, finding that Gomez wasn’t as effective with his superior power once he backed up. Unbeknownst to all, Santana’s arsenal was limited due to an injury he sustained early in the fight.

“Nobody knows about this but in the second round my right arm went numb and nobody knew about that,” said Santana. “I couldn’t throw my right hand by the end of the fight. I don’t know what happened, maybe I blocked a punch or something like that but from the elbow to the tip of my hand, it was swollen. I looked like the Nutty Professor.”

Still, Santana won the fight on all three cards and validated what promoter Gary Shaw had seen in him when he took Santana on as a project.

Friday’s eight-round bout against Acuna will be on the undercard of tonight’s “Friday Night Fights” headlined by the Rustam Nugaev-Denis Shafikov IBF lightweight title elimination bout. Santana’s fight isn’t expected to be tough; the 32-year-old Nicaraguan has yet to win in six appearances on American soil.

Santana isn’t yet ranked in the top 15 of any of the four major sanctioning bodies but he says he has assurances that will change shortly and that his own chance to put a belt around his waist isn’t far off.

“Gary [Shaw] wants to sit down after the fight and talk our next move, said Santana. “He did promise me a world title shot in the near future. I’ll just continue with my motto: “Train, fight, win, brother. My shot will come, bud.”