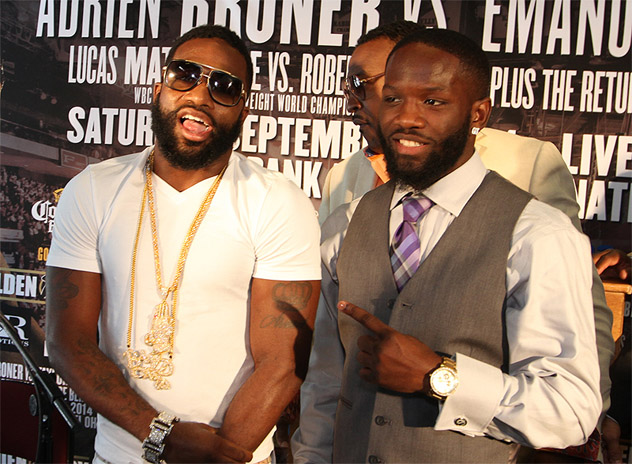 Adrien Broner will be fighting in his native Cincinnati, Ohio, for the 13th time when he meets Emmanuel Taylor in a 140-pound bout at U.S. Bank Arena on Sept. 6.

A three-division titlist, Broner (28-1, 22 knockouts) has scored stoppages in all but two of his appearances in his native city. During Thursday’s press conference announcing the bout, Broner said it’s his goal to assure that Taylor (18-2, 12 KOs) does not see the bell ending the 12th round.

“I’m more than excited to be back in Cincinnati. It’s like when you spoil a kid – when you buy a kid a new pair of sneakers,” said Broner, 25, via release.

“The next time they come out they are going to expect another pair. Every time I’ve fought at home, I gave my fans a knockout. I spoiled my fan base in Cincinnati. So every time I fight here that’s what they want.”

Broner will headline a card that will also feature RING number one-rated junior welterweight Lucas Matthysse against Roberto Ortiz and two-time titlist Andre Berto against an opponent to be determined.

“It brings tears to my eyes to be here. Without Golden Boy, we couldn’t keep these kids fighting in the ring,” said Mike Stafford, Broner’s trainer. “You see the matches they make and everyone needs to acknowledge what Golden Boy is doing.”

Broner’s last two fights at U.S. Bank Arena were knockouts in the third and fifth rounds over Vicente Martin Rodriguez in November 2011 and Vicente Escobedo in November in July 2012, respectively.

Broner’s two bouts against Eric Ricker in Cincinnati ended in a no contest in December 2008 and a unanimous decision victory in March 2009.

“I have to give them a knockout. I got to and it’s got to be pretty too. I think I’m going to hit him with the 30-piece and the biscuit,” said Broner, whose win over Rodriguez earned WBO’s 130-pound belt.

“I’m going to put on a show like I always do and I’m ready right now. I know Taylor pretty well and I respect him but at the end of the day, he’s my enemy. I have to go out there and get my victory.”

THE RING’s number seven-ranked 140-pounder, Broner is coming off a unanimous decision over Carlos Molina in his junior welterweight debut on the undercard of Floyd Mayweather Jr.’s majority decision over Marcos Maidana in May.

In victory over Molina, Broner bounced back from a unanimous decision loss to Maidana last December, his second 147-pound fight.

“Everyone knows that Adrien Broner is a superstar because of all the things he does in the ring. What makes Adrien so great is that he will fight anyone. He has never turned down an opponent. Few fighters have done what he has in his career. He already has a Hall of Fame career,” said Eric Gomez, vice president and matchmaker for Golden Boy.

“Only one other fighter has jumped from 135 to 147 in the history of boxing and that is Henry Armstrong. That’s the kind of talent we have here in Adrien Broner. Adrien and his team said they wanted to fight in Cincinnati and it was done. You have to give Adrien a big hand for that. Adrien is doing something special for his hometown. Emmanuel Taylor is a tough fighter. He always comes to fight and he is going to be ready on September 6.”

“I’m definitely an underdog but I can’t tell you my game plan. We just have to go in there and do what we have to do to get a win. I have to beat him really bad to get the win; I know that. I know we’re going up against the odds fighting him in his hometown. I’m going to go in there and fight my fight. That’s what we train hard for,” said Taylor.

“I saw his fight against Maidana and I saw a lot of weaknesses there but that’s not the only way he can be beaten. I definitely can take advantages of his weaknesses but I have some other plans for fighting this guy. I’m definitely looking to make a statement. This is the biggest fight of my career. This is what I’ve been working for my whole life since I was a little kid. It’s my time to make a statement.