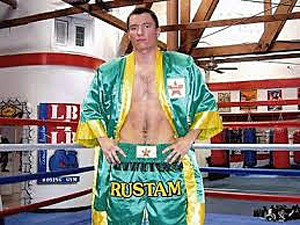 The popularity of Russian fighters in the United States has increased in recent years.

Whether it is the devastating punching power of Ruslan Provodnikov and Sergey Kovalev or the blue-collar style of Evgeny Gradovich, Russian fighters have given fight fans something to talk about.

Not to be outdone, but Rustam Nugaev has made some noise as well. While the lightweight contender has not fought on a big platform as his Russian compatriots, he is eager to prove that he can fight at an elite level in his division.

First things first, he must take of business on Friday against a familiar face who also happens to be Russian.

Nugaev will fight Denis Shafikov in an IBF title-elimination bout at the Chumash Casino Resort in Santa Ynez, Calif. The bout will headline a Gary Shaw Productions card and will be broadcast live on ESPN2.

Nugaev (27-6-1, 17 KOs) has strung together six consecutive victories, the last five by knockout. In his previous bout, he stopped Marvin Quintero after the fourth round when Quintero was unable to continue due to a possible fracture to his left hand.

Nugaev is not as well known as Kovalev or Provodnikov, but he has the goods and is eager to demonstrate it against another Russian fighter.

Standing in his way is Shafikov (33-1-1, 18 KOs), who is coming off a 12-round unanimous decision loss to Miguel Vazquez in February.

While a possible world title bout is within reach, coupled with having a strength and reach advantage over Shafikov, Nugaev is not looking past the southpaw fighter.

“We’ve known each other for several years,” Nugaev told RingTV.com. “In fact, we’ve sparred each other. I expect a tough fight, but we’re ready to go. I’m focused on Shafikov and I need to win this fight in order then look at which champion I could fight at (135 pounds).”

With power in each hand, coupled with a fierce body attack, Nugaev has been mentioned amongst the best in the lightweight division.

Not only has he won his last fights in a row, Nugaev has faced fighters with a wide array of styles. In his April 2013 bout against Jonathan Maicelo, Nugaev slowly broke the Peruvian fighter down until he knocked him down and out with one punch in the eighth round.

In his last bout against the savvy southpaw Quintero, Nugaev was coming on after a slow start. His precision punches were finding their mark and one has to wonder how much punishment Quintero would’ve taken in the fight.

While he has enjoyed his recent success and his winning streak has not gone unnoticed, Nugaev acknowledges any fighter could be in his shoes.

“I’m happy to fight for this opportunity,” said Nugaev. “I just go in there to do my job. That is the most important for me. I don’t worry about what goes on around me. I just focus on my own and what I need to know to get better.”

Nugaev is making the most of those opportunities. One loss could result in a catastrophic setback to his career and it could relegate him to gatekeeper status in the lightweight division.

He is not thinking that way and believes he has the goods to challenge and defeat any lightweight in the world.

That is a tall order, considering such fighters like Terence Crawford and Miguel Vazquez not only win, but make their opponents look bad in the process.

Fighting those fighters could be a reality sooner than one thinks. A win over Shafikov could lead in that direction for the soon to be 32 year old.

“I don’t care what people think. Fight fans and American promoters are getting to know Russian fighters. Russian fighters are making the most of their opportunities. I’m doing that and I will give a good fight on Friday.”

In the co-feature, unbeaten junior lightweight Jose Pedraza will fight Juan Carlos Martinez in a 10-round bout.

This Saturday night, the fledging company ventures to America’s Finest City for a “Path to Glory SD Style” card.

In the main event, junior featherweight Christopher Martin (27-3-3, 9 KOs) will fight Giovanni Caro in an eight-round bout at the Harley Davidson dealership in San Diego.

Martin was scheduled to face Efrain Esquivias on July 25 in Ontario, but Esquivias had to pull out of the fight due to an illness.

Four more bouts round out the card.

Doors open at 6:15 p.m., with first bell scheduled for 6:45 p.m. The Harley Davidson San Diego is located at 4645 Morena Boulevard in San Diego.

FROM SOUTH AFRICA TO SOUTHERN CALIFORNIA

Welterweight Chris Van Heerden acclimated himself well to Southern California since moving from South Africa about eight months ago.

He has won two bouts during that time, has signed with King Sports Worldwide, and has recently made another move that may benefit his career that much more.

Van Heerden has hired trainer Freddie Roach to work with him. Van Heerden came into contact with Roach when Van Heerden was used as a sparring partner for Miguel Cotto in his preparation against Sergio Martinez.

“When I worked with (Miguel) Cotto in camp, Freddie gave me one look and told me I could be something special,” Van Heerden told RingTV.com of his recent conversation he had with Freddie Roach. “It’s a dream come true. I believe that Roach will bring out the best in me. I’m excited.”

Van Heerden (21-1, 11 KOs) also was used as a sparring partner for Saul “Canelo” Alvarez in his preparation for the Erislandy Lara fight.

There is no exact date on when Van Heerden will return to the ring, but Van Heerden says a possible return could be sometime in late September. Van Heerden worked with Manuel Robles before making the switch to Roach.

RAMIREZ HAS ANOTHER HEAVYWEIGHT

Flores, who hails from the Los Angeles suburb of Rowland Heights, was unbeaten until he was stopped by Charles Martin on Aril 16.

No return date has been announced on when Flores (14-1, 12 KOs) will return to the ring.