Jorge Linares says victory is a must against Ira Terry 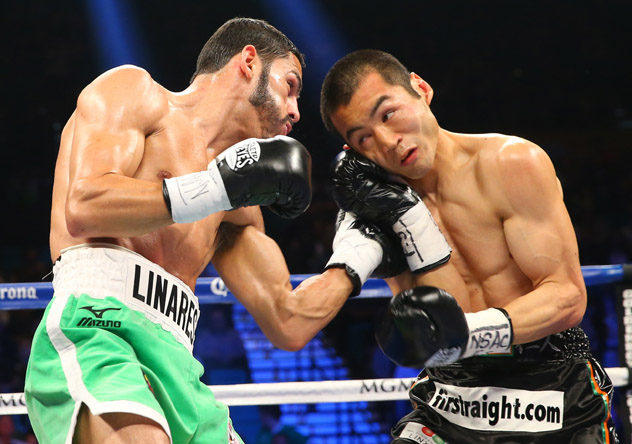 Two-division titleholder Jorge Linares says victory is “obligatory” when he enters the ring for a lightweight bout against Ira Terry on the undercard of the Shawn Porter-Kell Brook headlined Showtime tripleheader at StubHub Center in Carson, Calif.

Linares will be after his sixth straight victory and his fourth knockout during that run when he meets Terry (26-11, 16 KOs). Terry, a 27-year-old journeyman, is not expected to offer much of a threat, having lost nine of his past 11 fights during a period when he was knocked out seven times.

Linares won the WBC’s vacant featherweight belt with a 10th-round knockout of Oscar Larios in July 2007 and won three straight bouts before falling by first-round knockout against Juan Carlos Salgado in October 2009.

The loss to Salgado dethroned Linares as the WBA’s 130-pound titleholder. The Japan-based Venezuelan earned the belt with a fifth-round stoppage of Whyber Garcia in November 2008, and defended it with an eighth-round knockout of Josafat Perez in June 2009.

Linares bounced back as a lightweight with four consecutive wins before being knocked out twice in a row by Antonio DeMarco and Sergio Thompson in 11 and two rounds in October 2011 and March 2012.

In his last fight in March, Linares out-boxed Nihito Arakawa for a unanimous decision.

“I always think positively. You have to jump in the ring thinking like a winner,” said Linares. “I trust my training, my trainer and my corner. We don’t have any negativity at all. We feel good and prepared.”

According to WBC President Mauricio Sulaiman, Linares is the mandatory challenger to the winner between WBC lightweight titleholder Omar Figueroa Jr. (23-0-1, 17 KOs) and Daniel Estrada (32-2-1, 24 KOs), who will also fight on the Porter-Brook card as well.

Figueroa, 24, is coming off a split-decision win over Jerry Belmontes in an April defense of the belt he won after flooring Arakawa twice during a unanimous decision victory in July. Figueroa has gone 13-0 with nine knockouts since a split-draw with Arturo Quintero in November 2010.

Estrada, 29, has won nine consecutive fights, including five by knockout, and stoppage victories in the past two straight. Estrada was last in action for Decmeber’s third-round knockout of Hugo Armenta, and last suffered defeat by split decision to Reyes Sanchez in December 2010.