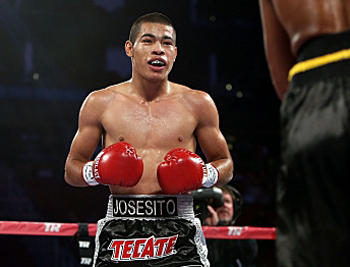 GLENDALE, Calif. – Jose Felix did what he was supposed to do against a modest foe. The stoppage was icing on the cake.

Felix rebounded from his only defeat as a pro, stopping Alejandro Rodriguez in the sixth round before a sold-out crowd at the Civic Auditorium on Saturday night.

The lightweight prospect was coming off a 12-round decision loss to interim 130-pound world title holder Bryan Vasquez on April 12 in Las Vegas, Nev.

From the outset, Felix was in control of the action against Rodriguez, beating him to the punch with hooks to the head and body. One hook to the head by Felix in the third round began producing blood from the nose of Rodriguez. Although blood continued to gush out of the nose, Rodriguez hung in there, fighting back and even landing a punch or two in the process.

During an exchange in the sixth round, Rodriguez pulled away from the action, grimacing in pain and holding his right glove. Shaking his head, he motioned to referee Raul Caiz, Sr., who waved the fight over at 1:41.

In the co-feature bout, lightweight Ivan Najera won a eight round split decision over Stan Martyniouk.

Both fighters were warned for holding or hitting behind the head by referee Jack Reiss during the middle rounds, with Martyniouk being the more guiltier of the two.

As the bout progressed, Najera slowed down considerably, fighting in spurts. During the last two rounds of the fight, Martyniouk kept landing repeatedly with lead or counter right crosses to the head of Najera.

– Jose Zepeda stopped Adrian Garza (8-4, 6 KOs) in the third round in a scheduled eight round super lightweight bout. Zepeda (20-0, 17 KOs) dropped Garza three times in third round, prompting referee Jack Reiss to stop the fight at 2:22.

– Unbeaten and 2012 Olympic Silver Medalist Esquiva Falcao (4-0, 2 KOs) stopped Malcolm Terry in the second round. Falcao dropped Terry once in the first and dropped him again in the second, prompting referee Raul Caiz, Sr. to stop the bout at 49 seconds.

– Lightweight Luis Sedano won a four round unanimous decision over Luis Diaz. Sedano was dropped by a right hand in the first round, but dominated the rest of the way to win by scorecards of 38-37, 38-37, and 38-36.