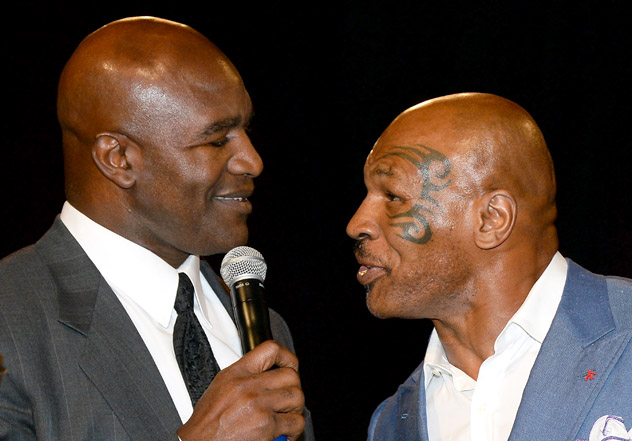 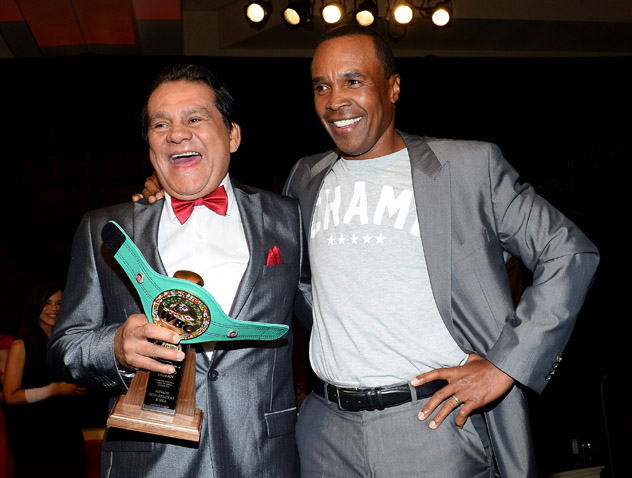 LAS VEGAS – The theme of the second Nevada Boxing Hall of Fame banquet was rivals-turned-friends.

Two inductees – legends Evander Holyfield and Roberto Duran – shared the honor of their induction with former foes Mike Tyson and Sugar Ray Leonard on Saturday night in a packed ballroom at the Tropicana Hotel.

Tyson once was so frustrated with Holyfield that he bit off a portion of his ear in the ring but the two have become friends, close enough that Tyson introduced Holyfield for his induction into the NBHOF.

Tyson’s intro was short but genuine.

“He was one of the truly great warriors. You had to kill him to beat him,” said Tyson, who was stopped by Holyfield in 1996 and disqualified for the biting incident the following year.

And Holyfield had nothing but kind words for Tyson.

“I’ve known Mike ever since Mike was 17,” he said. “Mike and I were trying to make the (1984) Olympic team. Mike worked hard. I respect all that Mike has done.”

Duran was introduced by his daughter, Irichelle, who remembers long periods her father spent away from home and the joy he brought once he returned. She recalled him walking the family’s pet lion as if it were a dog and wrestling with it in the backyard as if he were Tarzan.

On Saturday, he was simply a grateful man. The former four-division titleholder thanked his native Panama, he thanked Mexican fans because his father was Mexican and he thanked an English-speaking country in which he became a very popular fighter.

“I would like to thank America,” he said through a translator. “America gave me so much, America put up with me for five decades. I’m very thankful for that.”

Leonard simply expressed his affection for his one-time antagonist, who he beat twice and lost to once.

George Foreman Jr. spoke on behalf of his father and inductee George Foreman, who wasn’t at the event. “My dad couldn’t be here. He said something about making another comeback,” Foreman IV said.

Floyd Mayweather Jr. introduced inductee Cornelius Boza Edwards, the former junior lightweight champion and one of the most exciting fighters of his era. Edwards, a trainer with Mayweather Promotions, has known the pound-for-pound king for 18 years.

“He’s a friend, he’s a mentor, and he was a legend,” Mayweather said. “ÔÇª He’s been a part of my success for 18 years as a professional. And without him I don’t know where my career would be. He’s a father figure. ÔÇª

“Boza, I really, really want to thank you. You keep me on the right path every day. I know when I’m in tip-top shape in the gym is when Boza gives me a nod. I know I’m ready.”

Mayweather, who outpointed Marcos Maidana in May, was named NBHOF Fighter of the Year for a second consecutive time.

Click here to see a photo gallery of the event.