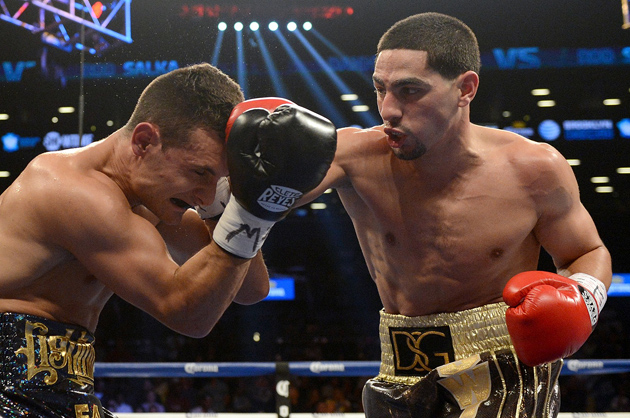 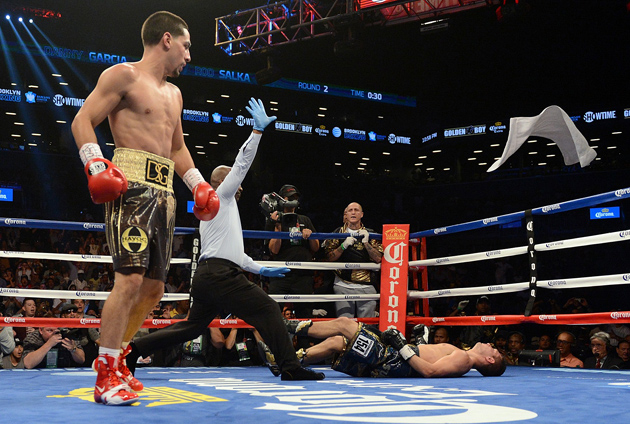 BROOKLYN, N.Y. – It gnawed at him. Though, you wouldn’t hear an outward word from world junior welterweight champion Danny Garcia. The Philadelphia-based fighter likes to put on the Teflon face that he’s impervious to anything. That it didn’t sting hearing the criticism, seeing it spelled out on Twitter, after he beat Mauricio Herrera back in March by a controversial majority decision.

In many boxing quarters, there were some that doubted Garcia won. That he got a gift in his first fight in Puerto Rico.

There was a lot on Garcia’s mind. Someone was bound to pay. Someone had to pay. Club fighter Rod Salka happened to be that “someone.” Salka, a lightweight jumping up 10 pounds over his previous fight, really had no prayer.

Garcia crushed the overmatched Salka at 2:31 of the second round before 7,012 at Barclays Center in Brooklyn on Saturday night.

It looked over as soon as the two came out after the opening bell. There was a distinct size advantage. Garcia was naturally a few inches taller, but also quite thicker than Salka.

In the opening round, Garcia chopped at the body and showed patience in dismantling Salka. “Swift” hadn’t stopped anyone in two years, since he took apart legend Erik Morales, who appeared rather the soft the night they met on October 20, 2012.

Garcia unloaded with a textbook left hook right on Salka’s chin – and that was it. Salka was out before he hit the canvas. Referee Steve Willis immediately rushed to Salka’s aid, hardly bothering to wave it over. The official end was 2:31 of the second round.

“I did what I was supposed to do,” Garcia said. “I treated this like a big fight. I came here to purge. I told everyone here tonight that this would be the Danny Garcia show. No matter who I fought tonight, they were going to get beat. I was out to purge, I was out to kill. There are no easy fights in boxing. Herrera was supposed to be an easy fight, and you know, I listened to the people and I had a bad performance [against Herrera]. I didn’t listen to anybody this time and I did what I had to do. I feel Danny Garcia at his best, nobody can touch him.”

Immediately, Garcia put it out there that Lamont Peterson, who defended the IFB junior welterweight title earlier in the night, “could get it, too.”

“Danny did what he supposed to do, because he was supposed to do in Puerto Rico what he did tonight,” Angel said. “At 140 pounds, he’s the champ, but we’re moving to 147 pounds.

“Danny was motivated. He was tired of that bad image that he was carrying around. He didn’t lose sleep over it, because words can’t kill you. He worked hard all of his life to get here. I’m not happy for Salka, because I’m not happy to see anyone knocked out like that, but that was his corner’s problem, not mine. But we’re moving to 147, unless something else [like the Peterson possibility] comes up.”