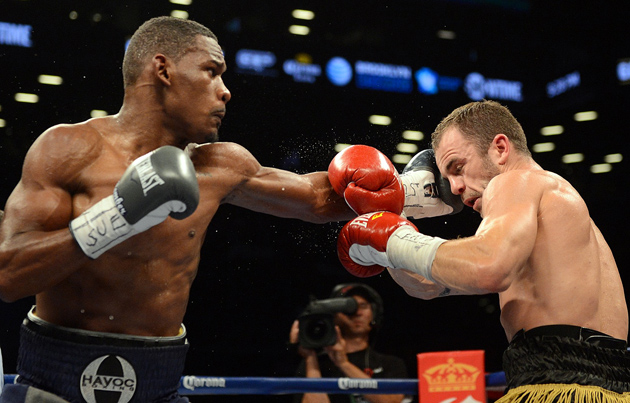 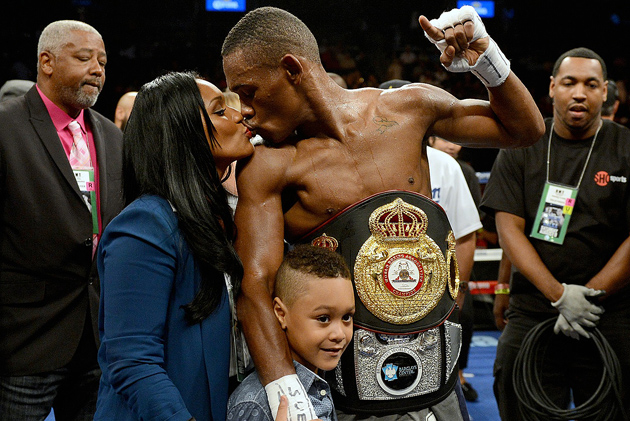 BROOKLYN, N.Y. – Lying there in his hospital bed, ravaged by a cancer he feared would take his life, Daniel Jacobs spoke about a night like this. He confided to his girlfriend, Natalie Stevens, that he doubted his hand would be raised again in a ring and be declared a world champion.

All the while, Jacobs was depositing those few positive glimpses for times like this night. For the time his battle with cancer was won – when he could raise a belt over his head not just for what he did in the ring, but what he beat outside it to get there.

At 2:58 of the Round 5 on Saturday at Barclays Center Jacobs’ crusade ended.

It completed an arduous journey for Jacobs, who immediately called out fellow Brooklynite Peter Qullin, the WBO middleweight titlist.

But first, Jacobs and his family needed time to savor the moment.

“At one point [Danny] did not believe that this could happen,” said Stevens, holding back the tears. “He didn’t believe it, but I told him that he would one day have his shot and that God was trying to tell him something that he’s stronger than he thought. This tested his strength. It tested all of us. This was something he had to go through, and we both know why. The world doesn’t know, but we both know. We’re here.”

Jacobs knocked down Fletcher in the first with a left hook. It looked like an easy night for “The Miracle Man,” but Fletcher fought back, though returned to his corner on very unsteady legs. In the second, Jacobs seemed to take his foot off the gas, letting Fletcher rebuild the confidence he lost in the first three minutes. But by the third, Jacobs was in firm control again.

In the fifth, Jacobs, with a raised sense of self-assurance, applied the heat. He nailed Fletcher a number of times, stunning him before closing with Fletcher falling back into the ropes and Griffin calling it over.

The five-inch scar that once ran up Danny Jacobs’ back from the surgery to remove the cancerous tumor against his spine is gone. And as Jacobs was thanking the phalanx of well-wishers and cameras plunged into his face, he pulled up and thanked a fellow cancer survivor there to see him fight.

“I can be an example and an inspiration to others, that means everything to me,” Jacobs said. “It has been a long road. And I had my doubts, a lot of doubts that I’d even get here. I just have to continue to be the best that I can beÔÇöand it’s all I can do. When I was literally on my death bed, and at my lowest point, I knew deep down God had a plan for me.”

It was really a one-sided affair, more like a glorified sparring session than what could be construed as a title defense. Peterson won virtually every second of every round, before it was mercifully stopped by referee Pete Santiago at 2:48 of the 10th round.

One of the more spirited undercard fights featured local Brooklynite Sadam Ali (19-0, 12 KOs) against Jeremy Bryan (17-4, 7 KOs) in a welterweight bout. Bryan didn’t succumb under Ali pressure, fighting back numerous times and making it interesting. But in the end, Ali, the former 2008 Olympian, remained undefeated with a 10-round split-decision victory.