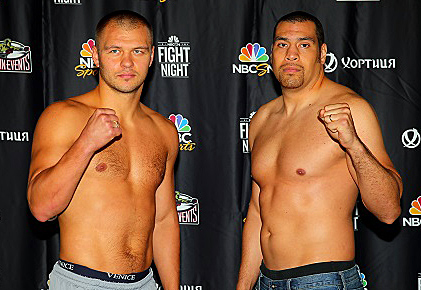 Although heavyweight contender Vyacheslav Glazkov appeared to struggle during his first fight under trainer John David Jackson, he was, nevertheless, able to escape with a majority decison over journeyman Derric Rossy on Saturday in Pennsylvania.

“It’s not an excuse,” said Glazkov, “… but even before the fight, I got my right hand injured. It’s still a little injured from the fight with Adamek.

In undercard bouts, heavyweight Joseph Parker scored two knockdowns during a third-round knockout over Keith Thompson, and light heavyweight Vasily Lepikhin scored three knockdowns on the way to stopping Robert Berridge in the fifth round.

For Berridge, a run of nine consecutive stoppage wins was ended, his previous loss being by unanimous decision to Blake Caparello in May 2012.