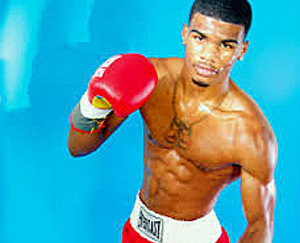 Best night of pro career: Martin is happy with all his performances to date.

“At this point of my career I’m developing my skills as a pro to transfer from amateur to pro,” Martin told RingTV.com. “All my fights have been really different; they’re all a learning experience, so we can put it altogether in the future.”

When pushed he says he’s happiest with his most recent performance, a four-round shut out of Matthew Baca.

“I was very happy with my last performance on ESPN,” said Martin before the perfectionist in him continued, “I’m not satisfied with it. I’m still growing as a prospect. I’m going to keep working on my craft to get better and better, that’s where I’m at in my career, developing skills and learning.”

“He did a little bit of everything (against Baca), he boxed, he punched, he punched to the body, he used the jab, he did well defensively – I thought he did an excellent job.”

Worst night of pro career: Understandably at this stage of his career, Martin has yet to face anyone of real substance who has been able to test him in a serious way and take him into deeper water.

“Every fight I go into I feel like I’ve got it under control,” said Martin.

However, in his fifth pro fight back in April Martin was taken the distance against Misael Chacon, losing a point for an infringement.

“I got a point taken for holding his head down,” he said. “He was a shorter guy than me so it made it closer. He was a pressure fighter so it was a different look.”

Next fight: Originally Martin was due to fight in his adopted hometown Cleveland on Sunday, the show fell through but full credit to Martin’s handlers as they were able to quickly negotiate a deal with Mike Tyson’s promotional company, Iron Mike Promotions, to put Martin on the undercard of an Aug. 8 show.

Martin steps up to the six-round distance for the first time when he meets Engelberto Valenzuela (8-2, 3 knockouts). Noticeably, both of Valenzuela’s loses have come in the first round, beaten by his countryman Carlos Ocampo last summer and then by uber-prospect Felix Verdejo on the Sergio Martinez-Miguel Cotto card a Madison Square Garden, N.Y.

Why he’s a prospect: Martin had a very impressive amateur background during which he fought over 200 fights, winning 12 national titles to form a very solid base from which to start.

Martin won the National Junior Golden Gloves title three times (2005-07), the National Silver Gloves (2005) and National Junior Olympics (2006) among other tournaments. He also competed in numerous international duels. His U-19 National title win in 2009 should be viewed as the biggest success of his amateur career. Martin only took part in a couple of national tournaments as a senior before opting to turn pro.

The 2012 Olympics in many ways came too early for the young Ohioan, losing in the early rounds to Robert Easter. However, Martin humbly acknowledges he was beaten by the better man on that occasion.

“He was a better fighter that day, he’s a really good fighter. I’m glad I got to step in the ring with him,” said Martin.

As an amateur Martin beat his good friend Kenneth Sims at the Silver Gloves, he beat Gary Russell’s younger brother Gary Antonio Russell Jr. at the Ringside tournament and went 1-1 with Julian Rodriguez in the seniors.

His trainer Joe Delguyd, a noted trail lawyer in Cleveland, has worked with Martin for almost a year and would happily have Martin spar anyone in the world from 135-140 pounds.

“I gained that confidence when we were in Florida working with (Yuriorkis) Gamboa,” said Delguyd. “We were a little concerned about putting him in that deep, he’d just turned 21, just got into the pros but Ryan did very well.

“If you can work out with Gamboa, who is from the whole Cuban amateur system (you can work out with anyone), he’s a very tough and gritty guy. I’d let him spar with anyone in the world. Why wouldn’t I?”
Initially, Martin was brought into camp with Gamboa to give the look of Terence Crawford, a tall rangy lightweight. Martin would get an invaluable 40 rounds of sparring against the Cuban ex-patriot.

“The water got a little deep for Gamboa’s camp,” continued Delguyd, “because Ryan was not playing games, he sat down on some really hard shots on a couple of different days and they asked us to go home.”

It was a huge backhanded compliment from team Gamboa not lost on Delguyd.

“They got rid of us, we were there two weeks,” he said. “The first week they worked pretty much without incident and then second week, Stacy McKinney and Gamboa’s dad said they weren’t interested in working with us anymore and it wasn’t like they were getting down to the end of camp there was plenty of time left for him to get ready for the Crawford fight.

“I would be confident he could work with anyone in the world in the gym, obviously we know the gym and a real fight is totally different. He’s a young kid he’s got a lot of growing to do but he stepped it up with Gamboa.”

Looking back on the whole experience Martin see’s working with Gamboa as a good learning curve.

“It was an awesome experience. I was honored to be in camp with him. He talked to me a lot on things I should work on. Sparring him, I didn’t look at him any different from anyone else I’ve sparred with,” said Martin.

Those sessions with Gamboa brought new things out in Martin.

“What I liked about the Gamboa situation was he got to deal with a lot of the pro tricks,” said Delguyd. “A lot of holding, a lot of spinning, punching on the angles, things that these guys he’s fighting on entry level aren’t doing.”

Delguyd is in no doubt who Martin reminds him of.

“He reminds me of Sugar Ray Leonard,” said a gushing Delguyd. “He’s a nice looking guy, nice smile, nice personality. He’s reasonably humble, he’s confident and he should be. He has fast hands, fast feet. He punches well.”

Why he’s a suspect: At this point the former amateur standout has done everything right.

Although SMS Promotions hasn’t been active promoting its own shows this year, Martin has been kept active fighting five times on other promoters’ cards which has worked well so far. However you wonder as Martin progresses if this may become more of a problem.

There are also the usual questions about how a young fighters stamina and how he will react to adversity.

Story lines: Martin was born in Akron, Ohio, but moved when he was seven years old to Chattanooga, Tennessee. One day he followed his older brother Courtney to the gym he instantly fell in love with the sport and never looked back.

“The first thing I did was put on gloves and headgear and I fell in love with it,” he said.

Martin was partially raised by his boxing coaches living in a middleclass background.

Early in Martin’s amateur career he was tabbed by then middleweight champion of the world Jermain Taylor as one to look out for.

“Actually I met him coming up in the Silver Gloves,” said Martin. “And he has always liked the way I fought and he thought I had tremendous talent and he had real high hopes for me making the 2012 Olympic team which didn’t play out as planned but it was good to have someone like that recognize my talent early in my career.”

Martin graduated in 2011 from Central High School and is looking at furthering his education by studying nutrition as well as strength and conditioning.

“I’m looking to go to a community college just to learn about what I’m doing to my body and putting in there.” said Martin.

He moved to Cleveland last August to work with his trainer Joe Delguyd.

“When he first came here last August, I saw a kid who was very fast, very tall, who had 200 amateur wins,” recounts Delguyd. “But he had to make that transition to the pro’s, so we slowed him down, we started to teach him to get leverage on his punches, we started teaching him to go to angles to get better leverage on punches.

“We basically taught him things they don’t do in the amateur’s, a lot more about body punches, he hits very hard. They say you can’t teach power well maybe you can’t but you can teach the basics of balance and timing. He is making that transition from the amateurs to the pro’s very smoothly.”

In the next 24-30 months manager Tim Van Newhouse and Delguyd estimate Martin will crack the top ten at 135 and the sky is the limit.

“World champion in three weight classes,” Delguyd said confidently. “His frame is huge at 135, he’s 6-feet tall, he’s got wide shoulders; he’s going to grow out of 135, hopefully after he wins a championship, or so into 140 and ultimately 147.”

So far Martin is very happy with how everything has gone and speaks highly of his promoter 50 Cent.

“It’s very exciting to be under a name like 50 Cent because he’s a world icon,” said Martin. “He’s a very, very intelligent man. I’m ready to take on SMS Promotions and see where he can take me in the future years and as long as I’m doing what I have to do inside and outside the ring I know he’ll be behind me 100 percent.”

Martin met James on a couple of occasions in Akron when he was growing up, as Martin’s brother actually played against James in high school.

“Him coming back to Cleveland I think is pretty good for the city and brings excitement back hereÔÇªuntil I take over (laughs).

When asked what happens first him winning a world title in boxing or James to win an NBA title with the ‘Cavaliers’, Martin chuckles. “I think me winning a championship happens first (laughs) but whichever one happens first it’ll be good for the city. Hopefully, one day he can walk me to the ring (laughs).”