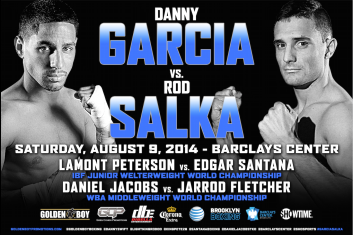 RING junior welterweight champ Danny Garcia weighed in at 141.75 pounds for his non-title bout against Rod Salka, who weighed 141 at Friday’s official weigh-in held outside of the Barclays Center in Brooklyn, N.Y., the site of their Showtime-televised main event on Saturday.

Garcia (28-0, 16 knockouts) and the entire Golden Boy Promotions card has come under the scrutiny of hardcore fans and much of the media during the build-up to the Showtime tripleheader that includes IBF 140-pound titleholder Lamont Peterson against unheralded Edgar Santana and middleweight standout Daniel Jacobs against unknown (in the U.S.) Jarrod Flethcer, of Australia. However, most the criticism has been directed at Salka, who many believe is undeserving of main event status.

“People can think what they want but all the talking is done,” the 31-year-old Pittsburgh resident told Showtime’s Brian Custer following the weigh-in. “All we got to do now is fight. Every question has been answered a thousand times. I’m ready to show the world who I am.”

Fans already know Garcia, the holder of the RING magazine, WBC and WBA 140-pound titles, and many believe the 26-year-old Philadelphia native owed Mauricio Herrera an immediate rematch after the experienced Southern California-based contender gave him all his could handle when they fought in March. Garcia, who won a controversial split decision, says he’s focused on Salka and not the negative backlash.

“Negative or positive media, it’s all press and it means I’m relevant if people are talking about me,” Garcia told Custer. “I expect a great performance by me (on Saturday). I know (Salka’s) hungry but this is a different level. Fans can expect a vicious Danny Garcia, nothing pretty.”

Peterson, who weighed 140 pounds for his title defense against Santana, has also experienced some criticism regarding his opponent. He says the critics who dismiss Santana, who weighed 139.5 pounds, are wrong about the Harlem native.

“Who cares what the fans and media think?” said Peterson (32-2-1, 16 KOs). “I know Edgar Santana can fight. I expect a good, competitive fight but one that I will win.”

Santana (29-4, 20 KOs) said he will be motivated by his local fans who will attend the fight.

“I’m going to give my all for my fans and I’m going to fight like a Puerto Rican fighter,” he said.

Brooklyn native Jacobs (27-1, 24 KOs), who weighed 159.5 pounds for his shot at the vacant WBA “regular” middleweight title, will also be supported by hometown fans. His bout with Fletcher (18-1, 10 KOs), who weighed 159.25 pound for the Showtime Championship Boxing broadcast opener, is viewed as the most competitive matchup of the tripleheader.

[Editor’s note: THE RING and RingTV.com will not recognize the winner of the Jacobs-Fletcher bout as the WBA middleweight titleholder. That distinction that belongs to undefeated WBA beltholder Gennady Golovkin, who was recently elevated to “super” championship status by the sanctioning organization.]