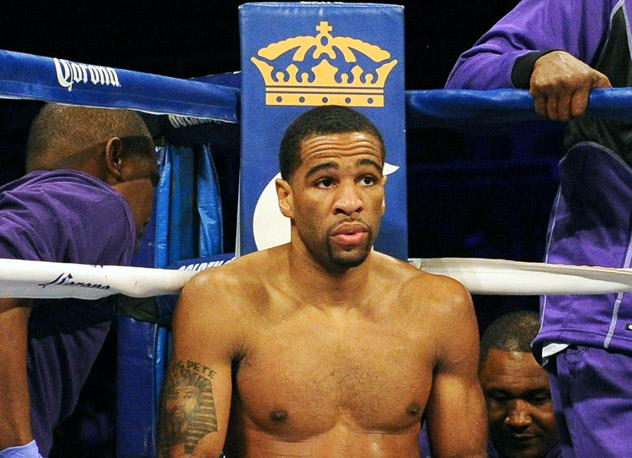 RingTV.com has a live round-by-round live update on this page of Saturday night’s junior welterweight clash during which IBF titleholder Lamont Peterson scored a 10th-round technical knockout at the 2:48 mark over Edgar Santana at Barclays Center in Brooklyn.

Peterson (33-2-1, 17 knockouts) is 6-1-1 with four stoppage victories since falling by unanimous decision to two-division titleholder Tim Bradley in December 2009.

In May 2013, Peterson, 30, was knocked out for the first time in his career by RING No. 1-rated junior welterweight Lucas Matthysse in a non-title bout, but regrouped by defending his belt with a unanimous decision over Dierry Jean in January.

Santana (29-5, 20 KOs), 35, had won his last three fights, all by stoppage, since falling by unanimous decision to Manuel Perez in February 2012. Santana was last in action for a first-round knockout of Michael Clark in November.

Showtime will broadcast the fight as part of the Danny Garcia-Rod Salka card beginning at 9 p.m. ET/PT.

REFEREE PETE SANTIAGO STEPS IN TO END THE FIGHT ON THE ADVICE OF A RINGSIDE DOCTOR BARRY JORDAN!!!! PETERSON WINS BY 10TH-ROUND TECHNICAL KNOCKOUT AT THE 2:48 MARK!!!

Round 1: Fighters are at the center of the ring, with referee Pete Santiago in control. Peterson circling and displaying upperbody movement. Santana wings away, jabbing and missing. Overhand right lands for Santana along the ropes. Santana misses wildly with a left and then a right. Not much from Peterson, who takes a jab, then digs a left to the body. Another left to the body by Peterson and two jabs. Peterson jabs to the body and moves away. Jab by Peterson and a right and then another right. Right and left both to the head by Peterson. Right to the head by Peterson, who appears to have regained the momentum after a slow start. Long jab by Santana as Peterson dances away. Peterson, 10-9

Round 4: More of the same in the fourth as Peterson moves. Santana lands a thudding left hook to the body, but Peterson continues to box effectively. Peterson gets the better to the body during a toe-to-toe exchange. Santana continues undeterred trying to land the big punch. Left uppercut by Santana, who, nevertheless, still is getting out-worked. Hard left uppercut and then a right hand by Santana. Left hook by Santana. Two rights to the body and a left to the head by Peterson. Right to the body and they trade left hooks. Peterson out-hustles Santana in close with a number of hard shots to the body, but Santana appears to be encouraged. Peterson, 10-9; Peterson, 40-36.

Round 8: Santana lands a crisp right to the body and an early counter-left uppercut, but Peterson’s back to firing to the body and ending his combinations with lefts and rights to the head. Peterson’s backing up Santana and landing at will. Seven, eight punches by Peterson — the first five to the body and the last three to the head. Santana’s just getting tagged relentlessly to the head and body whether on the ropes or on the center of the ring. Counter-left by Santana. Santana has a spirited 15 seconds late in the round that includes a counter right and a counter left, but Peterson still is getting the better of the action. Right uppercut prior to the bell for Santana. Peterson, 10-9; Peterson, 80-72.

Round 10: Early movement from Peterson again. Jab to the body by Santana. Left to the body by Santana. Seven-punch series by Peterson ending with a left and a right both to the head. Peterson again forcing Santana backward for a period and then briefly creating distance behind his jab. Peterson’s out-hustling Santana on the inside and keeping his punches tight. Left hook by Santana who gets stunned by a left hook from Peterson, who cracks a left and right to either side of Santana’s face. Peterson has out-landed Santana, 271-to-94 at this point, and still is getting nailed viciously to the head.

REFEREE PETE SANTIAGO STEPS IN TO END THE FIGHT ON THE ADVICE OF A RINGSIDE DOCTOR BARRY JORDAN!!!! PETERSON WINS BY 10TH=ROUND TECHNICAL KNOCKOUT!!!