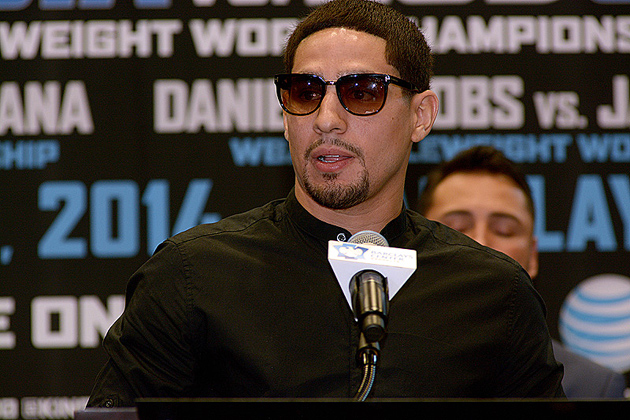 Undersized Rod Salka was already a tremendous underdog entering Saturday’s non-title clash at Barclays Center in Brooklyn with RING junior welterweight champ Danny Garcia before their bout was renegotiated to a 142-pound catchweight.

But Garcia (28-0, 16 knockouts) won’t be taking Salka lightly given he was last in action for a majority decision victory in Puerto Rico in March over the crafty Mauricio Herrera.

“I’ve been facing top competitors for a long time but sometimes you get a little over your head, ” said Garcia, of Philadelphia, during Wednesday’s open workout at Gleason’s Gym in Brooklyn, N.Y.

“I didn’t prepare myself as well as I should have mentally in Puerto Rico. All the people in Puerto Rico were great, but it was a little hard to stay focused.”

Garcia will be making his third appearance at Barclays Center against Salka, having scored consecutive victories there over Erik Morales by fourth round knockout in October 2012 and by unanimous decision over Zab Judah in April 2013.

“Every fight can’t be easy. Puerto Rico was a great experience but I’m happy to be fighting near my home. I love fighting here,” said Garcia. “There’s something about this atmosphere here that motivates me. They support not only the Puerto Ricans but I have all kinds of crowds behind me at Barclays Center.”

In his last fight in April, Salka (19-3, 3 KOs) dropped previously unbeaten Alexei Collado in the third round en route to an upset unanimous decision victory.

“My style is going to be the same against Danny as it always is. I am what I am. He’s going to be the bigger guy but that doesn’t make any difference to me. I’m going to do what I do and he’s going to have to adjust to that. I never listen to the outside noise,” said Salka.

“If confidence is a problem for you at this level, you’re not going to make it very far. I block all of that out and live in the moment and further my career. I’m going to beat the best 140-pounder in the world Saturday night; no doubt about it.”

CAN LAMONT PETERSON CONTINUE TO RISE ABOVE ‘UPS AND DOWNS?’

In May of 2013, Peterson, 30, was knocked out for the first time in his career by RING number one-rated junior welterweight Lucas Matthysse, having been dropped three times in the non-title bout.

“There are ups and downs in the sport. The last loss was tough but I don’t get too down,” said Peterson, who bounced back to defend his belt by unanimous decision against Dierry Jean in his last fight in January. “Everything changed the last fight and hopefully we can build on that. I want to give the fans the fight they want to see.”

Peterson will defend his belt on the Garcia-Salka card against Edgar Santana (29-4, 20 KOs). A 35-year-old Puerto Rican New Yorker, Santana has won his last three fights, all by stoppage since falling by unanimous decision to Manuel Perez in February 2012.

“I know Peterson is good. He’s a champion,” said Santana, who was last in action for a first round knockout of Michael Clark in November. “He likes to fight and he lets his pride take over. All I have to do is let my hands go. I’m in shape and I just have to make it a fight.”

Middleweight Danny Jacobs (27-1, 24 KOs) will be after his eighth consecutive stoppage in as many victories against Jarrod Fletcher (18-1, 10 KOs).

A Brooklyn native recently nicknamed “The Miracle Man” due to the fact that he is a cancer survivor, Jacobs is 2-0 with as many knockouts at Barclays.

“Being at home doesn’t give me motivation to go for a knockout, just to get the victory. We’ve had a long hard training camp and I’m just looking forward to displaying my skills,” said Jacobs.

“If I do get him hurt. I will get him out of there…You can expect bigger and better things after this fight. God-willing, I’ll be the first cancer survivor to be a world champion and I’m looking forward to being the best that I can be.”

Fletcher has won six consecutive fights, three by stoppage, since his sole loss by second round stoppage to Billy Joe Saunders in September 2012.

“It’s going to be a tough fight. He’s heavily favored, so I know I have to win the fight clearly. Danny is a good boxer and he has the full package. We’ve prepared well and we think we’re ready for him,” said Fletcher.

“Every boxer has weaknesses. I’ve done everything in my preparation to work on those things. I expect him to come out hard but who knows? No one knows what is going to happen, but I know I’m ready.”