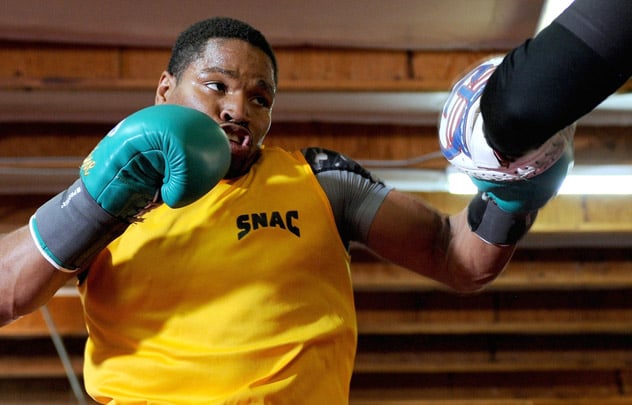 Shawn Porter considers himself a more battle-tested fighter than Kell Brook, the Englishman against whom he will defend his IBF welterweight title against in a clash of unbeatens on August 16 at the StubHub Center in Carson, Calif.

Over the course of his past five fights, Porter (24-0-1, 15 knockouts) has battled to a draw with former titleholder Julio Diaz, unanimously decisioned previously unbeaten Phil Lo Greco, won a rematch with Diaz by unanimous decision, dethroned Devon Alexander for the belt by unanimous decision and scored two knockdowns during a fourth-round stoppage win over two-division beltholder Paulie Malignaggi.

Against Alexander, Porter dictated a physical fight that left both men bleeding from cuts above their eyes and ended Alexander’s winning streak at four consecutive bouts since falling to two-division titlewinner Tim Bradley.

Porter believes his past experience will provide him with what he needs to defeat Brook (32-0, 22 KOs) in their Showtime-televised bout.

“I don’t know if he is the toughest opponent I’ve faced yet. His record would say that he is,” said Porter, who shared his thoughts during an open workout on Wednesday at Barry’s Gym in Las Vegas.

“But if you take a look at the caliber of fighters that I’ve fought before him, I think the other guys are more challenging fighters, especially Devon Alexander, who has an awkward and complicated style. Not to call Kell Brook plain but he has a more up-and-down style that will be easier to deal with.”

Brook will be after his fifth consecutive stoppage win against Porter, his past three victories coming in the eighth round over Carson Jones in July 2013, the fourth round over former titleholder Vyacheslav Senchenko in October and Alvaro Robles in the eighth in March.

Brook will be making only his second-ever appearance on American soil, having debuted with a fifth-round stoppage of Luis Galarza in December 2011 in Atlantic City.

“I believe that Brook will feel the added pressure in this being his first title fight. I handled it great. I welcomed it and loved it going into my first title fight. I’m not sure if he has the same personality to handle the extra pressure,” said Porter.

“I do know there will be a big crowd out there and I can’t wait. The West Coast is hot and the crowd gets loud. I’m ready. This fight will be pure entertainment for the crowd and I love to entertain the crowd and my fans. I have played this fight in my head thousands of different times from going the distance to me knocking him out with one punch.”

Brook admits to some pressure, even as he insists he is motivated for victory and a chance at an all-English clash with former titleholder Amir Khan.

“I think about fighting in somebody else’s backyard. It goes through my mind, of course. Many things go through my mind but it’s boxing and there’s nothing I can do. It’s the way the situation is,” said Brook.

“I’ve travelled a long way to challenge for the world title but I’m prepared for everything and anything. Me beating Porter and winning a world title opens up all of the doors and opportunities. I think a fight with Amir Khan would be a huge. Everybody would grab on to that fight.”

Note: Quotes from a press release