Jerry Belmontes seeks the KO vs. Abner Cotto on Thursday 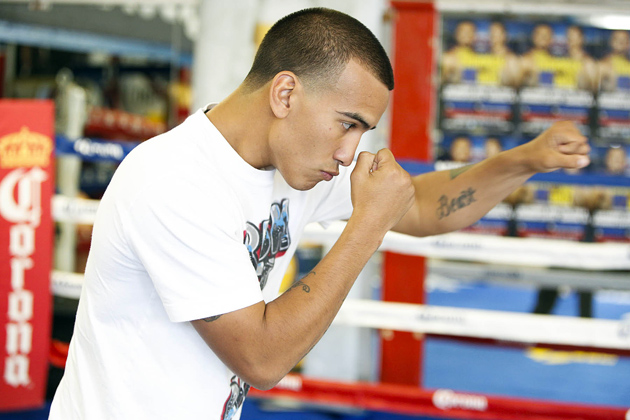 After hearing he came out on the short end of a 12-round split decision to Omar Figueroa on April 26, Jerry Belmontes was understandably full of emotions.

He felt he had done enough to win, but walked out of the ring at the StubHub Center in Carson, Calif. surprised, upset, and frustrated.

Despite the setback, “The Corpus Christi Kid” believes he has many options in different weight classes, and he will make a statement at the expense of his opponent on Thursday night.

Belmontes faces Abner Cotto in a crossroads 10-round bout at the American Bank Center in Corpus Christi, Tex. The bout headlines a Golden Boy Promotions/ Leija Battah card and will top a “Golden Boy Live!” telecast on Fox Sports 1.

Belmontes (19-4, 5 knockouts) has had a roller coaster type of career, even after 23 professional fights. He began his career in the pro ranks with 17 straight wins, but has lost four of his last six fights, which makes Thursday night a must-win for Belmontes.

While some fighters may buckle under the pressure of having to win, Belmontes is reveling at the opportunity. He’s even confident that he will stop Cotto, despite the fact he is not known as a puncher.

“I mean business on Thursday,” Belmontes told RingTV.com on Sunday. “I feel so ready that I’m going for the knockout. I know we can get it and I have confidence in myself that it will happen.”

That may be a recipe for disaster as it is said in boxing that those who seek a knockout are more likely to get knocked out themselves. While he has never been stopped, Belmontes has been knocked down on two occasions throughout his career.

However, he may want to take matters in his own hands, rather than leave it in hands of the judges.

“Cotto is slow and since he’s tall, he fights straight up,” said Belmontes, who will be fighting for the fifth time in his hometown of Corpus Christi. “I haven’t gotten a knockout win in a while and I don’t see this fight going to a decision.”

While his focus has been on Cotto for this upcoming fight, Belmontes is still smarting from the decision loss to Figueroa. Having fought each other in the amateurs and now in the pro ranks, the loss to Figueroa seems to have given Belmontes that extra fire and confidence that seemed to lack earlier in his career.

His fight against Cotto will be fought at 130 pounds, something boxing insiders thought may have hindered Belmontes in his losses to Andrew Cancio and Francisco Vargas.

Belmontes concedes defeat against those fighters, but believes he is a much better fighter due to what he puts in his body along with what he does in the gym.

“I had to lose a pound in four hours in the Vargas fight,” he said. “I wasn’t eating well, but now I am. I felt great in the Figueroa fight at 135 pounds, but I feel comfortable at 130 pounds. It’s because I’m watching what I eat and I’m not struggling to make weight.

“As for Figueroa, that’s the fight I want. He’s been talking bad about me and I’m ready for Figueroa. That’s my main focus after this fight, but I’m not looking past Cotto.”

Belmontes believes he is on the cusp of improving his career. Even if he gets sidetracked or is not living up to what he has set his goals to be, there are people in his life whom will set him straight.

“I want to provide them with a great life, but they keep me focused,” he says of his family. “They’re the reason I don’t have a big head.

“I’m motivated and I’m going to push through to get those big fights.”