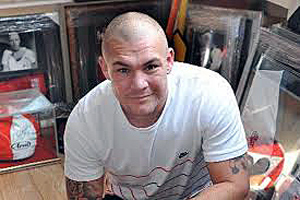 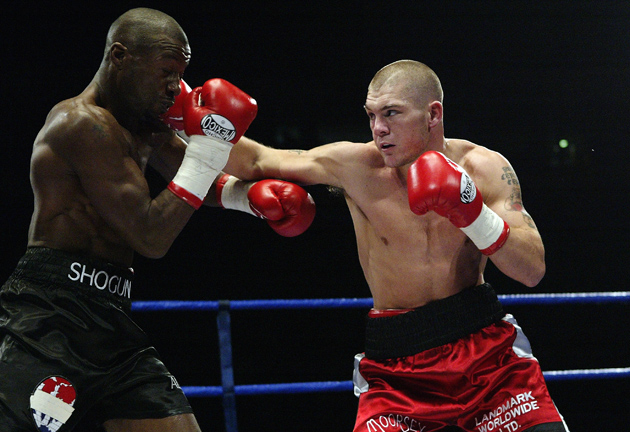 Jamie Moore lands a straight right on Gary Logan during the first defense of his British and Commonwealth junior middleweight titles on Oct. 18, 2003 in Manchester. Moore retired in 2010 and is now a trainer. Photo by John Gichigi/Getty Images

The 35 year old from Manchester, England, suffered two leg wounds when gunmen apparently burst into the MGM gym in Marbella and opened fire in what appears to have been a horrific case of mistaken identity. As of yet, Spanish police have made no arrests.

Moore, who was forced to end his career prematurely in 2010 on medical advice following a brain scan, was in Spain preparing Irish middleweight contender Macklin for his sold-out Aug. 30 fight against Jorge Sebastian Heiiland in Dublin, Ireland.

He was immediately taken to hospital following the attack, which is believed to have involved a total of five shots. The fact that Moore was hit in the leg apparently suggests the gunmen wanted to send out a warning to their target rather than kill him.

A renowned family man, Moore was clearly in the wrong place at the wrong time. However, the good news is Macklin has indicated that his trainer is on the mend after undergoing surgery.

“Just to let everyone know Jamie Moore is still in hospital but he’s OK,” said the Birmingham-born man. “He was shot in his legs but the doctors have said there shouldn’t be any serious or permanent damage done.”

Moore, meanwhile, has issued a message via Twitter expressing his huge shock at being caught up in the shooting and thanking the boxing world for its support.

“Overwhelmed. Gutted and confused about what happened, but thank God I’m OK,” he said. “It’s at times like this that you realise how well you’re thought of. I’ve had unbelievable support. Means a lot, it really does.”

To date there has been no statement as to whether he will continue training Macklin leading up to the Heiiland showdown.