Bernard Hopkins: ‘Sergey Kovalev stands in the way of my goal’ 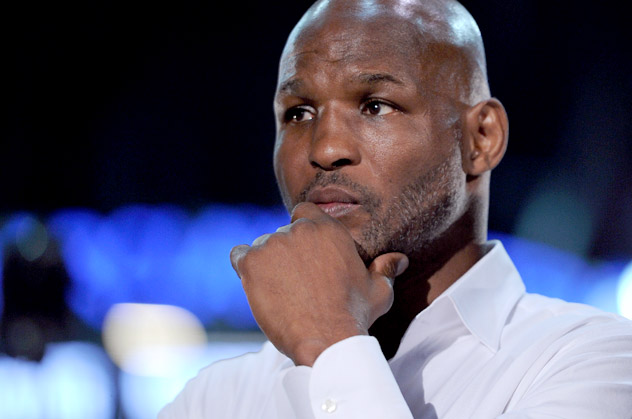 Two days before his 49th birthday on January 15, Bernard Hopkins told RingTV.com that he would “easily beat” Sergey Kovalev were they to meet in the ring.

“I would easily beat Kovalev. That would be the easiest fight. That fight, for me, would be just as easy as beating Kelly Pavlik,” said Hopkins, referring to his unanimous decision over the previously unbeaten Pavlik in October 2008.

“That fight would be real easy. Less than easy, if not easier – and don’t forget to put that ‘ER’ on the end of that word – than the Kelly Pavlik fight. I’m telling you.”

In the wake of developments that transpired over the weekend, it appears that Hopkins’ opportunity has become a reality.

A deal was reached on Friday evening for Hopkins (55-6-2, 32 knockouts) to put his IBF and WBA light heavyweight titles on the line against that of WBO beltholder Kovalev (25-0-1, 23 KOs) , Golden Boy Promotions and Main Events officially announced in a statement on Monday.

Hopkins-Kovalev would take place Nov. 8 on HBO at either Boardwalk Hall in Atlantic City or at Barclays Center in Brooklyn.

Hopkins had been fighting on Showtime, the network rival to HBO which had previously severed ties with Hopkins’ promoter, Golden Boy. Kovalev is currently under contract with HBO.

“Golden Boy Promotions has been crystal clear that we will make the best fights for our fans, no matter who else is promoting it, where it takes place or what network broadcasts it. This is Exhibit ‘A’ of our keeping that commitment,” said Oscar De La Hoya, president of Golden Boy Promotions.

“At 49 years of age, Bernard continues to electrify crowds with lightning quickness and impregnable defense. Sergey hits with thunderous force and is an early-round knockout threat every time he steps in the ring. With those two forces coming together, fans are in for a real treat.”

Friday’s deal was contingent on Kovalev defeating previously unbeaten left-hander Blake Caparello on Saturday night, which he did by second round stoppage. Kovalev had to rise from a first round knockdown against Caparello, whom he dropped three times in the final round.

Originally from Chelyabinsk, Russia, Kovalev, 31, is 13-0-1 with 13 knockouts in his past 14 fights, including a fourth round stoppage that dethroned previously unbeaten WBO beltholder Nathan Cleverly in August 2013.

Before facing Caparello, Kovalev dropped previously undefeated southpaw Cedric Agnew once each in the second and sixth rounds of a seventh round knockout in March.

“Throughout boxing’s history, great champions have always been motivated by fighting the best. Bernard Hopkins and Oscar De La Hoya are both living legends who never back down from a challenge. Sergey Kovalev made it clear that all he wants to do is test his skills against the finest in the world,” said Kathy Duva, CEO of Main Events.

“Main Events has always been able to deliver the biggest fights for its fighters and their fans. Since George Foreman defeated Joe Frazier in 1973, HBO has been synonymous with boxing at its highest level. It shouldn’t be any surprise that when you combine those elements, you get the most anticipated fight of the year.”

Hopkins was last in action for a unanimous decision over Beibut Shumenov, whom Hopkins floored in the 11th round in April for the WBA belt.

“I respect Bernard Hopkins for taking this fight,” said Kovalev, who had predicted an easy win for Hopkins over Shumenov. “When I came to America, it was dream to fight the best and now I am fighting, I have my chance. He says he is alien. He punch; I punch, then we see who is gonna go to Mars.”

Prior to defeating Shumenov, Hopkins brawled his way to a virtual rout of Karo Murat in October to extend his own record as the oldest man to defend a significant crown.

Hopkins’ victories over Murat and Shumenov were in defense of the IBF belt he won by unanimous decision over previously unbeaten Tavoris Cloud in March 2013, which, at 48, extended his mark as the oldest man to win a significant title.

Hopkins first set that record at the age of 46 by outpointing Jean Pascal for the WBC’s title in May 2011 before being dethroned following a majority decision loss to Chad Dawson in April 2012.

“Everything I do at this point in my career affects my legacy,” said Hopkins. “I’ve set and broken many records but becoming the oldest undisputed light heavyweight world champion is the goal and Kovalev stands in the way of that goal.”

A former undisputed middleweight champion with a division record 20 defenses, Hopkins has said his goal is to unify the 175-pound division before January 15 2015, when he turns 50.

Hopkins had been targeting hard-hitting RING champion Adonis Stevenson until those negotiations hit a snag and Golden Boy made the deal with Main Events for the fight with Kovalev.

“He’s another young, hungry fighter,” said Hopkins of Kovalev, “and just like the ones that came before him, he will leave the ring beltless.”