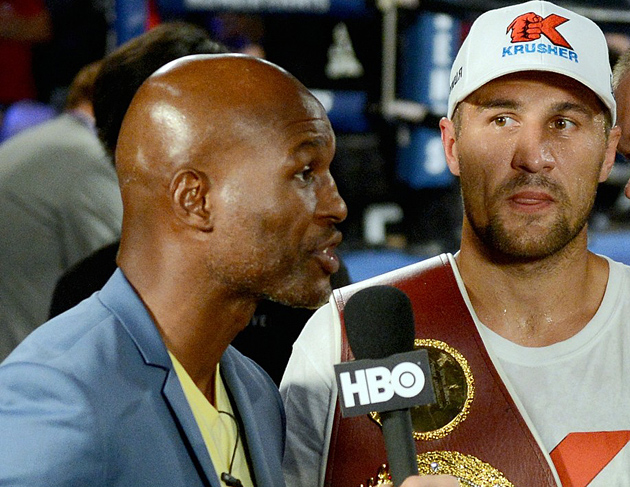 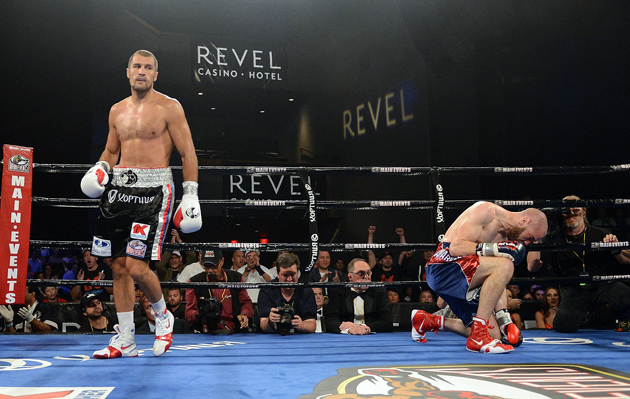 ATLANTIC CITY, N.J. – Sergey Kovalev had to feel the eyes on the back of his neck. They were probing eyes, sage eyes, observing, dissecting, looking for any flaw in the Russian’s supposed invincible veneer.

As Kovalev was defending the WBO light heavyweight title against overmatched Australian Blake Caparello on Saturday, the legendary Bernard Hopkins was seated ringside taking mental notes. Kovalev-Caparello was part of an HBO “Boxing After Dark” shot at the Revel Resort Casino.

Hopkins was hoping for a knockout – and he got it. But Kovalev (25-0-1, 23 knockouts) didn’t leave much for Hopkins to absorb, using a pulverizing body attack to trounce Caparello (19-1-1, 6 KOs) with a second-round TKO.

A knockout raises doubts once again whether or not Hopkins can withstand a serious puncher, as he had Felix Trinidad, as he had Kelly Pavlik, as he had Antonio Tarver. Hopkins has made a Hall of Fame career out of doing what is perceived to be the impossible in beating someone that’s believed to be unbeatable.

But first, Caparello had a little something to say. “Il Capo,” looking to spoil Kovalev’s November date, scored a surprise flash knockdown in the first round. After the two danced around through much of the opening round, Caparello nailed “The Krusher” with a straight left right through Kovalev’s high guard. It sent Kovalev reeling backwards to the canvas. Kovalev, however, was clear and unhurt.

“It wasn’t a knockdown, I was off balance and that [motivated] me to go finish the fight [in the second],” Kovalev said. “I didn’t feel his punch. He just caught me off balance.”

Asked if the Hopkins’ fight was on his mind, Kovalev snapped, “I didn’t think about Bernard Hopkins, because I was focused on [Caparello]. This was a big step for me, because if I didn’t win today, there was no fight with Bernard Hopkins. He’s very smart and very sneaky and I’m surprised he’s 49 years old. For me, though, it doesn’t matter who I fight. It’s a very good fight and a very interesting fight. I am surprised he took the fight. It is one of my dreams to fight Bernard Hopkins.”

Caparello’s knockdown punch seemed to awake Kovalev. He went into stalker mode in the second, slamming a right into Caparello’s ribs to drop him the first time in the round. Sensing Caparello was in trouble, Kovalev closed in for the kill. He brutalized Caparello with a right to the head, attacked the body and it appeared as if Caparello’s knee touched the canvas, forcing referee Sparkle Lee to rule another knockdown.

Whether it was or wasn’t is immaterial. Kovalev smelled blood. He ended the night for Caparello, wincing and leaning against the corner to steady himself, with a series of hard shots to his head, and then dropped another punishing right to the body. Caparello feel a third time. Lee saw enough, waving it over at 1:47 of the second round.

It was another quick night for KovalevÔÇöand a great prelude to what’s nextÔÇöa date with one of the all-time greatest defensive fighters.

“I’m not scared to fight [Hopkins] or scared to lose to him,” Kovalev said.

Hopkins, meanwhile, was in full froth.

“I needed Kovalev to get a devastating knockout, because then a lot of people will begin fearing for my life as they’ve done plenty of times before,” Hopkins said. “I’ll be on point on Nov. 8. I set out to be the undisputed light heavyweight champion of the world, but you need some cooperation not only from the fighters, but from everyone. The Kovalev side wanted to make the fight. We got the deal done. They gambled and they lost facing me.”

The most exciting fight of the undercard came between two sluggish heavyweight that couldn’t get out of the way of a punch in Brooklyn’s Adam Kownacki (7-0, 7 KOs) and Charles Ellis (9-2-1, 8 KOs), from Wichita, Kansas. The two nailed each other over five rounds, and Kownacki showed some promise, despite coming in at a jiggling Baby Huey-like 258 pounds.

Kownacki, with a huge Polish contingent backing him, knocked Ellis down with a right and a left to the head in the beginning of the fifth. Referee Randy Neumann immediately jumped in and called a halt at the :15 mark of the fifth.