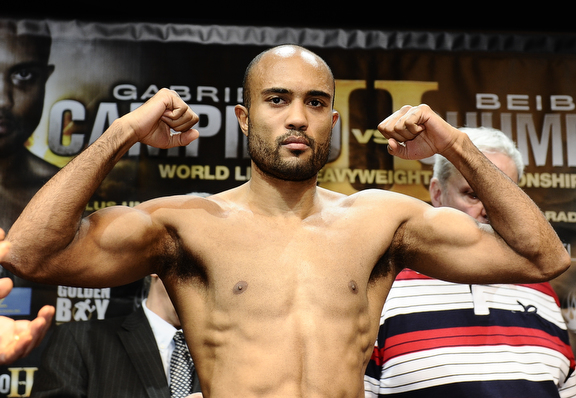 Heading into this week’s “Friday Night Fights” telecast, many wondered if this would be the last time we’d see Gabriel Campillo fight.

A former world champion, with a more recent history of being stopped against strong opposition, a similar outcome was the assumption when he was scheduled to face undefeated light heavyweight Thomas Williams Jr.

Instead, the questions about the future are to be directed towards Williams.

At the end of the fifth round, the ringside physician ordered the fight to be stopped due to a cut over Williams’ left eye, giving Campillo the TKO win. But this was no fluke occurrence. Williams’ unraveling started even before he saw his own blood for the first time in his career.

Williams appeared to be in control for the first two rounds, as he marched forward and threw wide body shots at a seemingly tentative and upright opponent. Either Campillo (24-6-1, 11 knockouts) took six minutes to wake up, or he figured the youngster out, because everything changed in Round 3 when he started moving forward.

Though he didn’t “turn back the clock” or do anything particularly worthy of hyperbole, Campillo did revert back to the methods that made him a titlist and top-10 contender for several years. The 35-year-old veteran simply picked up the pace, started to punch in volume, and made Williams fight moving backwardsÔÇösomething he hasn’t had to do much of during his ascent up the rankings.

The fourth round would be the most telling. Much is often made about “experience” in prizefights, without a tangible explanation of what advantages it provides. On this night, we would witness it first hand. Early in the frame, Campillo suffered a cut over his right eye, something he’d dealt with in the past.

Less than a minute later, Williams (17-1, 12 KOs) found himself bleeding from the nose, and from a gash above his left eye as a result of a right jab. His body language was immediately evident: He didn’t like it.

After a bumbling display in his corner, during which water was poured over top of the coagulant used on his cut (it is to be applied on a dry surface), Williams came out for the fifth round in full-on retreat and survival mode. He’d spend the next three minutes on the perimeter, trying to stay away from Campillo who had to do little more than just walk quickly at his opponent to create openings.

At the end of the round, Williams’ corner requested the doctor look at the cut, and the decision would prove fateful.

The bizarre scenes wouldn’t stop there however, as Williams immediately ran over to the ESPN commentary table and apologized to Teddy Atlas, who gave him a pep talk on national television in the middle of the broadcast.

Many fighters have seen their nights fall apart due to cuts, but seldom has one reacted so visibly during the fight, and so emotionally afterwards.

It would seem that the most pertinent questions asked tonight will be in the mind and heart of Thomas Williams. Ones we won’t get the answers to until we see him in this situation again.

The night also featured super middleweight contender Andre Dirrell’s successful return to the ring after an 18-month layoff, as he defeated Vladine Biosse with relative ease.

For the first four rounds, the 30-year old simply did whatever he wanted with the Rhode Island club fighter. The former Showtime Super Six participant, whose career has been derailed by inactivity and strange medical situations, clearly hasn’t seen his skillset diminish during his time at home in Flint, Mi.

The switch hitter didn’t let Biosse get anywhere near him unless he wanted him to, smoothly switching from orthodox to southpaw as he always has, albeit against a fighter several levels beneath him.

In the fifth, he finally willingly laid on the inside with Biosse, and started to rip him with uppercuts. Biosse couldn’t handle the jolting shots coming from below, and started to put the earmuffs up, simply accepting the punches. Dirrell (21-1, 14 KOs) rightfully stepped on the gas, and referee Jeff Macaluso stepped in to wave it off before Biosse (15-4-2, 7 KOs) had to hit the canvas. The time of the stoppage was 2:46 of the fifth round.

After the fight, “The Matrix” expressed particular interest in a rematch with Carl Froch, who is responsible for the only loss on his professional resume, back in 2009.