Chaves on Rios: ‘This will be a war in the center of the ring’ 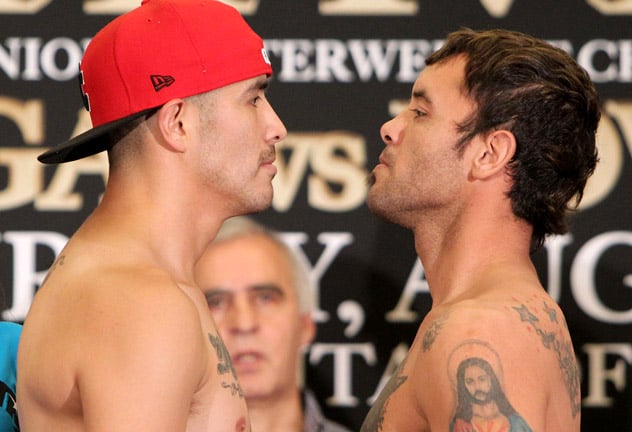 Diego Chaves arrived at McCarran Airport in Las Vegas at 8:42 a.m. on Wednesday morning after his visa was cleared for travel, collected his luggage at about 9 a.m., and proceeded to be checked out by a doctor affiliated with the Nevada State Athletic Commission.

“That took him away to get his bloodwork done and whatever else the commission requires,” said Lee Samuels, a publicist with Top Rank. “So that took a few hours, he checked his weight and he didn’t come to the press conference. But [Top Rank CEO] Bob [Arum] said that was fine.”

An Argentina-based fringe contender who will face Brandon Rios Rios (31-2-1, 22 knockouts) in a welterweight bout on Saturday, Chaves (23-1, 19 KOs) hand been detained in his home country due to a recent computer malfunction with U.S. immigration services that resulted in the delay of thousands of visa applications from being processed.

But if Chaves was tired on Wednesday in the wake of his long ordeal, the 28-year-old contends that he will be more than up for the task of handling Rios when the time comes.

“Rios is a warrior and a great one,” said Chaves. “But warriors can be beat. This will be war in the center of the ring.”

Rios is 1-2 with one knockout in his past three fights and is coming off a unanimous decision loss to Manny Pacquiao in his welterweight debut in November. Prior to facing Pacquiao, Rios lost by unanimous decision to Mike Alvarado in a March 2013 rematch of Rios’ seventh round stoppage win over Alvarado from October 2012.

Chaves will be fighting on American soil for only the third time against Rios but has scored knockouts in his past six victories.

Chaves debuted in Las Vegas with a six-round unanimous decision over Edvan Dos Santos Barros at the Hard Rock Hotel in March 2010 but was floored once each in the ninth and final rounds of a 10th-round knockout loss to Keith Thurman in San Antonio in July 2013.

Chaves rebounded from the Thurman loss in February when he stopped Juan Alberto Godoy in the third round.

“I know Rios very well. I watched his last two fights against Alvarado and Pacquiao,” said Chaves. “He’s big and strong. I need to get into a rhythm to get this win.”

The co-main event to Rios-Chaves will feature junior welterweight contender Jessie Vargas against fellow unbeaten Anton Novikov in a scheduled 12-round bout.

Both fights will be televised live on HBO’s “Boxing After Dark,” along with the Sergey Kovalev-Blake Caparello WBO light heavyweight title bout from Atlantic City, beginning at 9:45 p.m. ET/PT