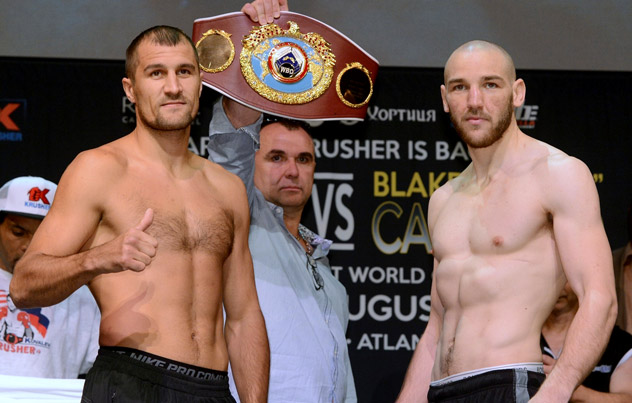 RingTV.com has a live round-by-round update of Saturday’s fight during which WBO light heavyweight beltholder Sergey Kovalev rose from a first-round knockdown to score two of his own in the second and final stanza of a second-round technical knockout victory over Blake Caparello from the Revel Resort in Atlantic City, N.J.

With a victory over Caparello, Kovalev already has signed to face IBF and WBA counterpart Bernard Hopkins on Nov. 8 on HBO in either Atlantic City or at Barclays Center in Brooklyn.

Kovalev out-landed Caparello, 26-7, including an advantage of 25-to-7 in power shots.

Referee Sparkle Lee waved an end to the fight at the 1:47 mark of the round.

Round 1: Female referee Sparkle Lee has given the final instructions, and the fighters are in the center of the ring. Kovalev stalks as Caparello jabs out of his southpaw stance. Nothing major within the first 30 seconds. Jab by Kovalev, left by Caparello. Right to the body by Kovalev. Lead left by Caparello. Kovalev continues to stalk. Caparello lands a left and Kovalev a right. KOVALEV DROPPED BY A LEAD LEFT. He’s not hurt, but it’s a knockdown nevertheless. Kovalev was squared up on the shot, but he’s back on the attack. Frustrated Kovalev rabbit punches Caparello. Hard right by Kovalev at the bell. Caparello, 10-8

Second round, Caparello continues to circle and throw the left off the right jab. Decent left landed again by Caparello. HARD RIGHT TO THE BODY DROPS CAPARELLO. HE’S UP AT THE COUNT OF EIGHT. Kovalev is on him in the corner, firing to the head and body. HARD RIGHT HAND DROPS CAPARELLO AGAIN. HE’S UP QUICKLY. Kovalev is on him in the same corner. CAPARELLO WILTS TO THE CANVAS, FIGHT IS OVER AS REFEREE SPARKLE LEAD WAVES AN END TO THE BOUT