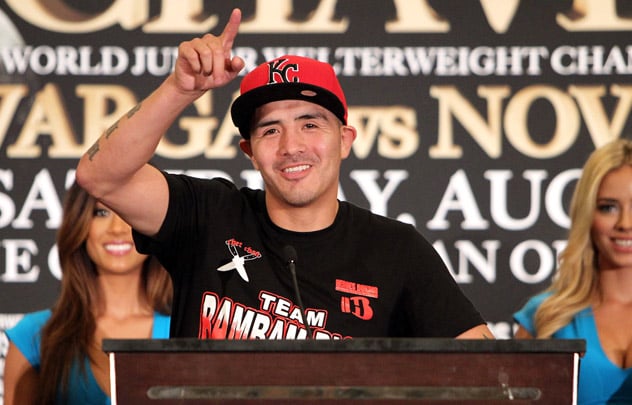 NFL Hall of Famer Joe Namath once said “When you have confidence, you can have a lot of fun. And when you have fun, you can do amazing things.”

Brandon Rios epitomized that quote leading up to his rematch against Mike Alvarado just 16 months ago.

Rios was unbeaten, had held a world title belt, and was gaining popularity for his ultra-aggressive, take-no-prisoners style in the ring. He oozed confidence even during his post-fight interviews on television and with the boxing media.

It was all going well until that confidence seemed to disappear during that Spring night in Las Vegas against Alvarado. It was almost non-existent when Rios lost a one-sided 12-round unanimous decision to Manny Pacquiao about eight months later.

Rios wanted to come back to the ring as soon as possible, but the time away from boxing gave him time to reflect, rebuild, and reload. If this formula adds up to the Brandon Rios of old, it could be bad news for the welterweight division.

However, Diego Chaves will let the boxing world know if Rios really is a threat at 147 pounds. They meet in a scheduled 12-round bout at the Cosmopolitan in Las Vegas, Nev. The bout, along with the Jessie Vargas-Anton Novikov and Sergey Kovalev-Blake Caparello fights, will be broadcast live on HBO’s “Boxing After Dark,” beginning at 9:45 p.m. ET/ 6:45 p.m. PT.

Fight week began with doubt if Chaves would be able to enter the country. Because of a backlog of applications with United States immigration, Chaves was basically in limbo because there was a delay in getting a temporary visa approved to enter the country from his native Argentina. Had Chaves not been able to enter the country, Top Rank, which is promoting the card in Las Vegas, had a replacement opponent in unbeaten, but untested Jose Zepeda. While Rios would still fight, it was unsure if HBO would approve broadcasting the fight.

With everyone involved holding their breath, Chaves finally received his visa Wednesday morning (allegedly with some backing from Senate Majority Leader Harry Reid) and arrived in Las Vegas later that evening.

While it would have been understandable for Rios to return to the ring against a modest at best opponent to get a confidence-building win, he will face an opponent that almost mirrors his style. Chaves also has an aggressive style, one that gave Keith Thurman fits before last July before being knocked out in the 10th round.

Then again, Rios has never been the one to ask for anything easy in his life, considering he grew up under difficult financial circumstances in Garden City, Kansas before now making his home in Oxnard, Calif.

“Aug. 2 was the only HBO date for me, so I had to take this guy (Chaves),” Rios told RingTV.com. “So it is what it is. To me, it’s just another opponent, but it’s a dangerous opponent. We have to be very prepared 100 percent and that’s what we’re going to do. The only thing on my mind is to win. I’m coming to Las Vegas on Aug. 2nd to win. I can’t think about losing. I can’t think about anyone else. My mind is set on Diego Chaves and just get the win.”

With consecutive defeats, Rios reassessed his career. He believes the success he had attained was done without the use of a strength and conditioning coach.

And that may be the case as both of Rios’ defeats were while he had strength and conditioning coaches in his camp. Even though Rios was victorious against Alvarado in the first fight, his team thought it was best to bring in strength and conditioning coach Angel Heredia to camp for the rematch. Rios and Heredia parted ways, and Alex Ariza was brought in for the Pacquiao fight.

Rios believes the hunger and dedication during training camp for a fight was much stronger before he started working with Heredia and Ariza. While some may scoff at the notion strength and conditioning coaches hinder rather enhance a fighter’s preparation, Rios remains convinced they did not help his career, especially in his last two fights.

“(The Alvarado fight) was very close,” said Rios, who is trained by Robert Garcia. “I lost a very close decision and I thought it could’ve gone either way. Against Pacquiao, there’s no disappointment in that. Everyone loses to Pacquiao. I lost to one of the best.

“I’m not trying to make an excuse or nothing, but I think since I’ve been working with strength and conditioning coaches my last few fights, I lost. I had a strength and conditioning coach in my loss to Alvarado and one with Pacquiao. And I lost. I’m a physically strong guy as it is. So I think all of the extra workouts kind of drained me. It killed me. Maybe that’s what it is. This time, we’re going back to (what) we used to do back in the day when I was winning, when I was having great outcomes in my fights. Train my butt off in the gym, eat right, and be ready. That’s what we’ve been doing and that’s what is going to happen.”

It was after those fights the boxing world saw a beaming and proud Rios, full of energy and quips that saw a confident side that few fighters seem to match today.

Losing may humble a fighter, but it also challenges the psyche of a fighter, especially after suffering back-to-back defeat as in the case of Rios.

Never at a loss for words, Rios admitted the defeats did get the best of him, psychologically. While he would have wanted to return to the ring as soon as possible after his defeat to Pacquiao, he admits it may have been a blessing in disguise to have stayed away from the ring.

To overcome those psychological obstacles after the Pacquiao fight and to prepare for the Chaves fight, Rios found comfort and solace with his wife, Vicky. While most spouses support their significant others emotionally, Rios acknowledges his wife was able to do more than that.

“My wife is a clinician/ therapist. (Talking to her) helped out a lot because she understands what I’m going through. She works with people with mental problems, people that have a wrong mindset. She does help me out because she does help set my mind straight. She helps bring me back down to earth. That’s always a big plus because she’s a therapist and she knows how to talk to people. I feel great.”

Life was pretty good for Rios until two losses changed all that. The losses psychologically brought Rios down, but his wife, father, Robert Garcia, and a close group of family and friends brought him back up. A win over Chaves will provide a shot in the arm for his career and possibly more lucrative fights at 147 pounds.

There is talk of Ruslan Provodnikov fighting the winner of Saturday’s fight later this year. While a Rios-Provodnikov clash could satisfy the appetites of boxing fans, Rios is not going to get ahead of himself.

The confidence Rios lacked in his last two fights may return against Chaves, which may make this fight intriguing. More importantly, Rios finding confidence in himself may be the most important thing for him.

“The loss(es) brought me back down,” he said. “I had to do sports therapy because I couldn’t get those losses out of my head. That (expletive) is behind me. I’m ready for this, the future. I’m ready for Aug. 2nd against Diego Chaves.”