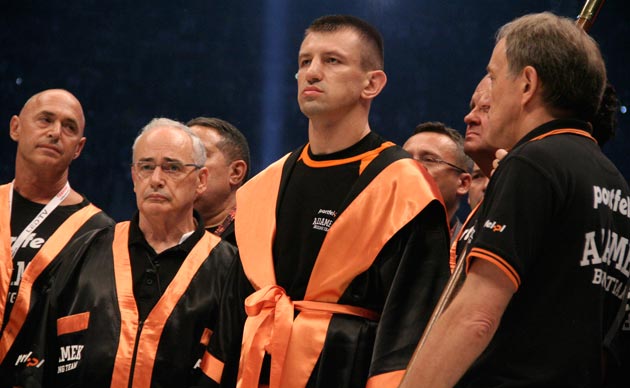 Williams is 17-0 with 12 knockouts and Campillo is 23-6-1 with 10 stoppage victories, having lost three of his past five fights.

Garcia (28-0, 16 knockouts) is coming off a disputed majority decision victory over Mauricio Herrera on March 15 and will face Salka (19-3, 3 KOs) in a 10-round, non-title affair. Peterson will defend his IBF 140-pound title against Santana and Jacobs will be after his eighth consecutive stoppage win against Fletcher.

In advance of their bouts, Showtime’s Steve Farhood came up with a list of his top 10 underdogs in boxing who emerged with upsets.

Muhammad Ali KO 8 George Foreman, October 30, 1974, Kinshasa, Zaire (Regains world heavyweight title) – Ali is at least 7-1 underdog in both bouts; his handlers, in fear of his fate vs. Big George, had reportedly mapped out route from stadium to hospital.

Welterweight Sadam Ali will face Jeremy Bryan, light heavyweight Marcus Browne will be in against Paul Vasquez and Lamont Peterson’s younger brother, Anthony Peterson will fight a lightweight rival to be determined.

Mexican junior lightweight Sergio Thompson will pursue his third consecutive win against Adones Aguelo of the Philippines on Saturday in an eliminator for the right to face WBC titleholder Takashi Miura, Golden Boy Promotions announced on Thursday.

Thompson-Aguelo will air live on Televisa and FOX Deportes from Estadio Nachan Kaan in Chetumal, Mexico.

Thompson, 30, was last in action in March, when he rose to the lightweight division for a unanimous decision over Ricardo Alvarez, the older brother of junior middleweight Saul Alvarez.

Aguelo, 26, is coming off an eighth-round technical knockout of Hirohito Fukuhara in April.

A 2013 inductee into the NVBHOF’s inaugural event, will not only attend the induction of former champion Roberto Duran, but join him on stage. The evening will also include a reunion of former rivals Evander Holyfield and Mike Tyson.

Duran, who is going in under the “Non-Nevada Residents,” category for the 2014 Class, won the first of three bouts against Leonard. Their final bout of the trilogy marked the opening event for Steve Wynn’s Mirage Hotel and was refereed by Richard Steele, each of whom are also being inducted into the NVBHOF.

In addition, Tyson will make the presentation to Holyfield, to whom he lost twice.

Heavyweights Gerald Washington and Nagy Aguilera will square off in the main event and featherweights Guy Robb and Jonathan Arrellano will compete in a third televised bout.

“Few moments in boxing are more exciting for fans than when a young, hungry prospect fights in front of his hometown. Manuel Avila seems to have all the tools,” said Oscar De La Hoya, president and founder of Golden Boy Promotions.

“But how he performs against a tough fighter like Sergio Frias in a pressure-packed situation will determine a great deal about ‘Tino’s’ future. Gerald Washington is an impressive athlete who has picked up boxing very well in a short period of time and if he beats a veteran like Aguilera, he could be on his way to the next level of the heavyweight division.”