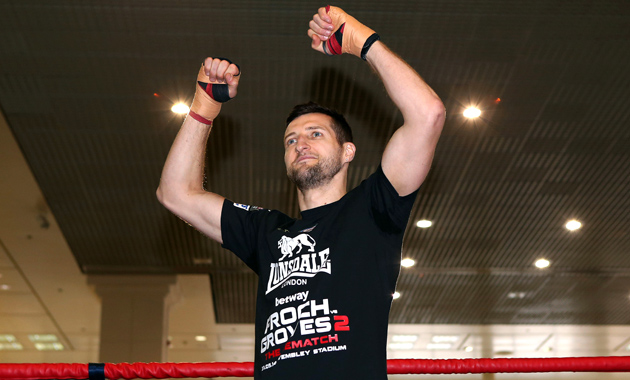 It was last month that Arum and Froch’s promoter, Eddie Hearn of Matchroom Sport, both informed RingTV.com that they were considering the matchup: Arum for late October in Las Vegas and Hearn for late this year or in the spring of 2015.

On Tuesday, Arum confirmed a report by ESPN.com that Jan. 24 was the target date.

“I don’t want to say anything more about anything until we get it done,” said Arum to RingTV.com.

Last month, Arum said he and Top Rank Vice President and matchmaker Carl Moretti had spoken to Hearn regarding the potential for a fight between Froch (33-2, 24 knockouts), who turned 37 on July 2, and Chavez (48-1-1, 32 KOs), who turned 28 in February.

Arum’s relationship with Chavez and the fighter’s manager, Billy Keane had soured over their failed negotiations for a potential bout with unbeaten WBA middleweight titleholder Gennady Golovkin, but Arum has apparently worked things out.

Keane could not be reached for an immediate comment.

Froch was last in the action in May, when he knocked out George Groves in the eighth round of their rematch. In November, Froch had to rise from a first-round knockdown to secure a disputed ninth-round stoppage over Groves.

Chavez’s initial bout with Vera took place at a 173-pound catchweight because Chavez was unable to make the originally contracted 168-pound limit.

A 26-year-old resident of Washington, D.C., Williams (17-0, 12 knockouts) was last in action for a third-round stoppage of Enrique Ornelas in April that followed a first-round stoppage of Cornelius White in January. Williams was floored once against White, who was dropped twice.

On the undercard, super middleweight contender and 2004 Olympic bronze medalist Andre Dirrell (21-1, 14 knockouts) will face Vladine Biosse (15-4-2, 7 KOs), ending an 18-month ring absence. Dirrell was last in action for a unanimous decision over Michael Gbenga in February 2013, while Biosse is coming off a unanimous decision loss to Callum Smith on July 12.

Campillo, who is 35, has lost three of his past five fights.

Campillo’s losses during that time were by disputed split-decision to then-titleholder Tavoris Cloud, and by stoppage in the third and ninth rounds against Sergey Kovalev and Andrzej Fonfara. Campillo (23-6-1, 10 KOs) bounced back from the loss to Fonfara with a seventh-round knockout of Ricky Dennis Pow in May.

“I’ve seen Campillo fight in person. I fought on the undercard when he fought Tarvoris Cloud. I sat and watched, because it was a championship fight in my weight class, and I just wanted to look at him. He didn’t really impress me, he’s definitely beatable,” said Williams of Campillo, who rose from two first-round knockdowns against Cloud.

Sampson Lewkowicz said Campillo may be in a make or break position.

“For Campillo, it’s the ‘last tango,'” said Lewkowicz, Campillo’s advisor. “He’s got to do his best and win, or it could be his last time in boxing. Campillo feels the same way, and has said so. But he is confident that he can win this fight, and then go on to win the world title.”