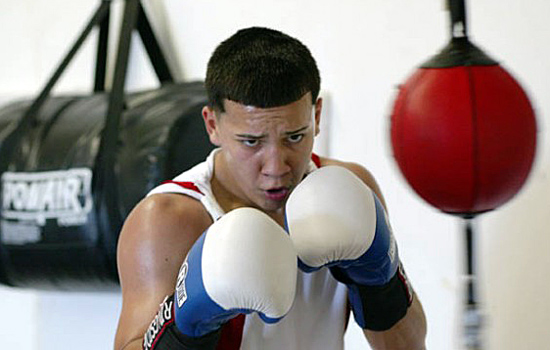 Best night of pro career: De Leon showed what he’s about in his second and third outings, displaying maturity beyond his years. Though both fights went the distance there were clear signs that the Detroit resident is one to watch out for.

“One I thought I did good in was my second fight,” De Leon told RingTV.com. “When I was on TV with Paul Velarde, he had more experience. It was in California in front of my manager.

“My third fight (Diamond Baier) for me was really good. It was at Radio City, New York. Those two fights were really good. I felt like I did good but there’s always room to improve on.”

Worst night of pro career: It’s still very early in his fledgling career to single out bad performances. At this stage of a fighter’s career it’s about getting them comfortable with appearing in the ring and with different styles. That said, Alejandro Ochoa made the youngster look bad at times.

“My fourth fight, it was awkward,” De Leon said, “He didn’t want to fight, he was running. The first round I cracked him with the hook and nearly got him out of there but it went the four-round distance. I cut him up pretty bad.”

De Leon understands that each fight is different and sometimes you have to just get the ‘W’ and move on.

“Every guy is different, every guy has their qualities. You have to make adjustments in the ring, every fight, learning more and more.”

Next fight: De Leon faces Pedro Toledo (2-1-2 with 1 no-contest) on the undercard of Brandon Rios-Diego Chaves card on Saturday at the Cosmopolitan in Las Vegas, Nev. The bout is scheduled for six rounds.

“I’ve seen a little of him fighting, he’s a good boxer,” said de Leon. “We’re ready for whatever he brings to the table.

“I know he doesn’t have that many fights but he’s a solid opponent and that’s what we want to show our skills.”

He would go four years without losing, beating the likes of Amir Imam, Kenneth Sims, Toka Kahn-Clary and Jose Ramirez along the way.

De Leon suffered a torn rotator cuff three weeks prior to the Olympic trials. Although he bravely fought on he was clearly not the same fighter.

“When I went to the Olympic trials, my left shoulder was so tight,” he said. “I couldn’t even let it go because it was already messed up. The doctor from Detroit couldn’t believe how I won the third Golden Gloves and was competing in the Olympic trials. It’s no excuse things happen for a reason.”

It was a slow process but De Leon was able to put that behind him and recuperate.

The highly accomplished amateur has been able to go under the radar as a pro because of his Olympic absence.

De Leon decided to turn pro under the watchful eye of Cameron Dunkin, who knows a thing or two about talent having guided the likes of Kelly Pavlik, Diego Corrales, Brandon Rios and Steve Luevano from the amateurs to world title success.

“He’s a prospect we’re very high on,” said Goodman. “He gets better every fight. He’s a real dedicated kid. He stays true to the game.”

“Lomachenko raved about him on how solid he is,” said Goodman.

It was reported that Lomachenko was sending sparring partners home on a regular basis, however De Leon stayed in camp with the Ukrainian for five weeks, sparring close to 90 rounds with the newly crowned WBO featherweight titleholder.

“It was a great experience,” said De Leon. “(I have nothing) but respect for Lomachenko, he’s a great fighter. I’m so blessed that I had the opportunity to be able to spar with him.”

It’s not the first time De Leon has worked with top drawer professionals. He was in two of Nonito Donaire’s training camps, preparing him for Toshiaki Nishioka and Guillermo Rigondeaux, as well as with Brandon Rios before last year’s fight with Manny Pacquiao.

Why he’s a suspect: There appears no obvious weakness as yet, though De Leon has yet to fight beyond four rounds, so his stamina is as yet unproven. We also don’t know how he’ll react to adversity such as being cut or dropped. Also having previously had shoulder surgery, you wonder if that is something that could rear its ugly head at some point.

Story lines: De Leon was born in Sabinas Hidalgo in the Mexican state of Nuevo Leon, but moved when he was six years old, initially to Texas before settling in Detroit. He liked boxing when he was little and bothered his father to take him to the gym. A family friend relented when he was eight, taking him to a local gym in Detroit. De Leon fell in love with the sport and hasn’t looked back.

In his early years De Leon worked under the auspicious eye of the late great Emanuel Steward feted for his work with the likes of Thomas Hearns, Lennox Lewis and Wladimir Klitschko at the famed Kronk gym in Detroit.

“He’s a superstar,” Steward once said of De Leon.

The experience of working with Steward is something De Leon will never forget.

“It was unbelievable,” said De Leon. “He would make you feel so comfortable around him, just like a regular person. You’d see him on HBO and you’d be like ‘Wow, I was just with him.’ He was a great guy, he was a mentor. He gave me advice, helped me out, looked out for me.

“He brought your confidence up. He would train you so good. He always told me when I was on the way up, ‘I want a Mexican star,’ that was motivation to me. Unfortunately, what happened happened, but he’s always in my heart. He was an easy guy to get along with. He’s truly missed by a lot of people.”

De Leon was winning countless national titles when he was told that when he turned 17 that he had to be a U.S. citizen to fight on the U.S. Olympic team. Though he was awarded citizenship he narrowly failed to make the 2012 Olympic team.