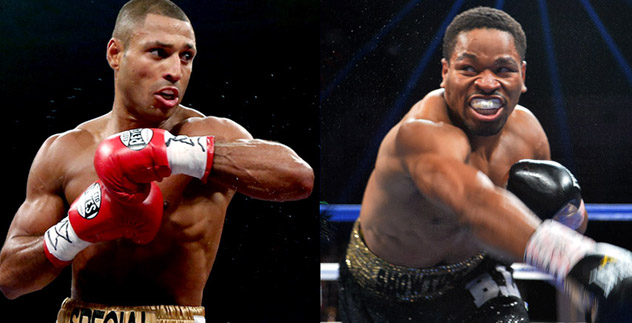 They know that the winner of their Aug. 16 clash could have “the key to Fort Knox” as Brook put it.

The unbeaten welterweights spoke to reporters during a national conference call on Monday in advance of Porter’s IBF title defense against Brook at StubHub Center in Carson, Calif.

“All of the experience that I’ve had as a pro has gotten me to the point where I am right now where I just feel very comfortable and I feel very excited about my matches, and I’m excited through camp. I think that I’m in my prime. I think that maybe my biggest motivation is maybe my dad and my family,” said Porter, 26, who is managed and trained by his father, Kenny Porter.

“My dad is with me all the time, and he pushes me, and we train year-round. We’re going hard in camp right now, and we’re six weeks out now. I train hard all day, every day, and I hardly take any time off. After a fight, I’m right back at it because this is what I love to do and you have to be prepared at all times.”

Porter (24-0-1, 15 knockouts) is coming off a fourth-round stoppage of two-division titlist Paulie Malignaggi in April that followed his unanimous decision over Devon Alexander for the belt in December.

Brook (32-0, 22 KOs) will be after his fifth consecutive stoppage win when he faces Porter, his past three victories coming in the eighth round over Carson Jones in July 2013, the fourth over former titleholder Vyacheslav Senchenko in October and Alvaro Robles in the eighth in March.

“I’m more than ready for this opportunity. He looked good in his defense against Malignaggi. He took care of him like no one has ever done before,” said Brook, 28.

“So he’s proven that he’s a worthy champion, and here we are again. I think that I’m more than ready for this fight. As the record shows, I’m 32-0 and I’m coming over there and give it my all.”

Brook will be making only his second-ever appearance on American soil, having debuted with a fifth-round stoppage of Luis Galarza in December 2011 in Atlantic City.

“I’ve boxed out there before, and we’re not thinking about it after being there,” said Brook, who expects to arrive in America on Wednesday. “It’s just going to be me and Shawn Porter in that ring…I will have two and a half weeks before the fight.”

Porter and Brook agreed to be randomly drug tested, according to Golden Boy Vice President and matchmaker, Eric Gomez. Gomez said that the UCLA Olympic Analytical Laboratory is expected to begin its random analytical testing in association with The California State Athletic Commission.

“The fight was originally supposed to be Sept. 6. In order to use USADA, they need at least six weeks to get all the required documents and testing done,” said Gomez, referring to the United States Anti-Doping Agency.

“When the date changed to Aug. 16, there wasn’t enough time. We then, collectively [Golden Boy Promotions and Matchroom Sport,] agreed to have the California State Athletic Commission handle the testing. UCLA Olympic Analytical Laboratory through the Department of Consumer Affairs will handle the testing for us. They start testing this week.”

PORTER HOPING TO BE ‘NEXT IN LINE’ FOR FLOYD MAYWEATHER JR.

Porter was asked if his bout with Brook was “an audition” for a bout with Floyd Mayweather Jr., whose Sept. 13 bout with Marcos Maidana is a rematch of Mayweather’s majority decision win in May.

“Of course, you do look forward to those opportunities. I don’t consider my fights ‘auditions,’ I consider them performances. I go out there and I give it my all. I don’t go in there and give it my all with expectations of getting something bigger and better,” said Porter, who, like Mayweather, is advised by Al Haymon.

“I go out there with the expectations of making that fight the biggest and best that I’ve had and go from there. This is boxing, so we don’t look ahead of ourselves. But at the same time, yes, Mayweather, we all know that he’s on the clock, and we’re all right there standing there hoping that we’re the next in line.”

Porter also addressed the notion of fighting Keith “One Time” Thurman, who is 23-0 with 21 KOs.

“I’ll fight ‘One Time’ two times… We’ve seen it all over the internet and all of the media wavelengths,” said Porter of Thurman, who is also a Haymon fighter. “Everybody wants that fight, I think that it would be an exciting fight, and it’s a fight that I wouldn’t turn down.”

Brook’s promoter, Eddie Hearn of Matchroom Sport, has said that he would pursue a bout with English countryman Amir Khan should Brook get beyond Porter.

Brook agreed, but also mentioned a potential clash with Manny Pacquiao, who will defend his WBO 147-pound belt against WBO 140-pound titleholder Chris Algieri on Nov. 22 in Macau, China.

“Of course, it’s a business. It’s in my mind. That’s the key to Fort Knox. This fight could lead to some massive money fights out there,” said Brook. “A matchup with Amir Khan, or an international fight with Manny Pacquiao. That would make a name for me arount the world after beating Shawn Porter.”

‘THIS IS NOT THE NEW SHAWN PORTER’

Porter has demonstrated tremendous growth and improvement over the course of his past five fights, culminating with the win over Malignaggi, whom he dropped for the stoppage in the final round.

A former junior middleweight who once served as Pacquiao’s sparring partner, Porter’s win over Alexander was preceded by last September’s unanimous decision over ex-beltholder Julio Diaz. Porter had battled to a draw with Diaz in December 2012 before winning a unanimous decision over previously unbeaten Phil LoGreco in May 2013.

“When I first turned pro, they told me that we were going to take it slow and build ourselves up and learn the fight game before we jumped into a big fight like the IBF championship fight that I had. I understood that the whole that it was a growth process, and a building process with each fight,” said Porter.

Porter acknowledges Brook as perhaps his biggest and most talented challenge to date.

“He’s someone who is very skillful, and he’s technically and fundamentally sound. Just looking at film of the guy, he keeps his hands up, and he throws a good, straight jab and a good one-two. That’s the basics of boxing and that’s good fundamentals of boxing and things that I work on daily. He’s very good at them. Not everyone that I’ve faced up to this point has been as good at them as he is,” said Porter.

Given his performance against Malignaggi, who was knocked out for the swiftest time in three stoppage losses, Porter goes into the bout with Brook as a prohibitive favorite.

“There’s no added pressure at all. This is what I love to do, and I’m having fun with it right now. We’re working extremely hard, and you know my dad, my trainer and manger Kenny Porter, and nobody sets the bar higher than him. So I’m working extremely hard every day, and the pressure has been put on me all in the gym, and on the track, and in the swimming pool and in camp. Once I get to the fight, all of the pressure’s off. I’ve already felt it all. There’s no pressure left to deal with in the fight, it’s just a matter of going out there and doing it the Porter way and getting the job done.”

“Shawn Porter is a fighter who knows if he has to stay on the outside and throw calculated combinations. The thing about Shawn is that he’s always very exciting. That’s a given, so the StubHub Center is perfect for him,” said De La Hoya.

“Depending on who he has in front of him, he either walks right through you and demolishes you, the way that he did against Paulie Malignaggi, or he takes calculated risks. That’s who Shawn is. He’s a smart offensive fighter, and that combination is very, very dangerous. So this is not the new Shawn Porter, this is someone who is just getting started.”

Porter has good reason to be worried, said Brook.

“I think that he knows that he’s going in with a guy who is 32-0, and who is passionate about becoming the world champion. I’m a big welterweight,” said Brook. ” I’m strong. I’m determined, and I think that he can see it in my eyes that I’m not coming to lay down. I’m going to lay it all on the line. I’m coming to get that title, and he knows that.”

CAN BROOK WIN A DECISION?

Asked if he was concerned about winning a fair decision on foreign soil, Brook said, “Of course.”