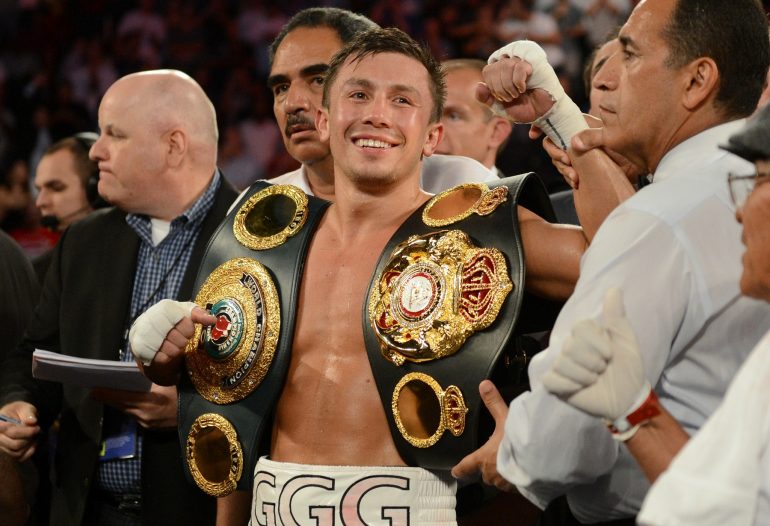 And when I say “What’s up” I wasn’t referring to the piling up of battered broken bodies GGG has been leaving behind his path of destruction. Though I’m certainly going to get to that right now. And with that said, we can now add Danny Geale to that pile. Gotta love The Demolisher! Any guy who can pulverize a rack of ribs like this dude does in the ring has got to be considered Da Bomb as far as every true fight-fan is concerned. And really, once that bell rings that mother-f__ker from Kazakhstan is like a friggin’ H-bomb with mitts and trunks.

And what about those clowns who keep ragging out like a bunch of sweaty middle-aged hags on menopause with their tiresome “Golovkin fights nothing but bums” bulls__t? Danny Geale was certainly no joke! The guy beat up the accomplished Felix Sturm and has been ranked in the top three for over the past 5 years or more. He would have driven a prime Maravilla to the brink. And yet The Demolisher just nearly decapitated him in three rounds

And for all those G-haters who refuse to count, that’s four top contenders GGG has taken down. G. Proksa, Matthew Macklin, Curtis Stevens, and now Dan Geale.

In all fairness to Mr. Geale it’s to his credit that he challenged The Demolisher like a true top-5 contender is supposed to do. Before, I was ripping him for supposedly punking out at first but I was wrong in that regard. And the tough Aussie certainly didn’t show up to take a dive and collect his pay-cheque. He tried to put up a real fight and even nailed the Russian-Korean badass with a really hard shot that would have left most other guys staring at stars. But Golovkin has a fortified block-house of a chin to match his mitts of mass destruction. That and the fact that The Demolisher is just so f__kin’ strong. And when the The G-Man smashed home that massive counter-shot poor Danny-Boy was f__ked. He had the look of some poor stray mutt that just got rammed from behind by a mack-truck. Game over.

So where does The One-Man Red Army march on from here? I certainly can’t picture Miguel Cotto or Saul Alvarez wanting to come within driving range of the guy. Same with grizzled vets like James Kirkland, Sam Soliman and Felix Sturm. The G-Man would kill them all. As in all at once, even.

Of course, fights with Andre Ward and Carl Froch has been hinted at repeatedly. Problem with Ward though is that he can’t seem to finish a training session without ending up in traction. So what will happen when he’s in against a destroyer like GGG? One thing for certain is that those injury-forced lay-offs of Ward’s aren’t helping him any while GGG clearly has all that momentum swinging in his favour. As for GGG-Froch, look at it this way. JC Chavez Jr. punked out from the G-Man despite outweighing him by 50 f__kin’ pounds or more but now here is the same Chavez ready to challenge tough-guy Froch. So what does that tell you all?

Anyhow, I’m going to leave it at that since my Pro-G rants are again no doubt pissing off those purists who bitch out about The Demolisher having no technique but yet get their rocks off watching these Betsy-boys in the ring prance around for 12 rounds without throwing a single punch.

To that, I say, let them eat s__t. Oh and there’s nothing wrong with Golovkin’s underrated technique either. This is no brainless face-first brawler we’re talking about. For instance, he’s really precise with those jabs and power-shots of his. Kind of like perfectly-timed pistons.

By the way Doug, the next time you’re in Southern California watching The Demolisher smacking around a few more cruiserweights tell him I said hi and to keep up the royal ass-kicking. Hey if it wasn’t for action-fighters like Golovkin among others boxing would be like a beer-mug full of foam but with no beer. Cheers! – Triple T

I also agree that Cotto and Canelo will take a pass on GGG, but I disagree that Kirkland, Soliman and Sturm wouldn’t fight him. Kirkland loves to fight and he loves a challenge. He’s in the running to face Alvarez in November but if that fight doesn’t come off, I don’t think he’d shy away from challenging GGG that same month. Middleweight title shots don’t come around every day.

Soliman would fight GGG because I don’t think there’s a bigger payday out there for him. Sturm would finally agree to face his old promotional stablemate because it could be his last shot at a world title (as well as a good payday).

Other contenders would fight GGG include Mora (who could make for a solid opponent in Los Angeles), Matt Korobov (though he has a pending mandatory shot at WBO beltholder Peter Quillin), Martin Murray and Billy Joe Saunders (both of whom could make for attractive bouts in the UK).

Froch vs. GGG would be a huge event in the UK or the U.S. I also think Ward is willing to fight Golovkin but until he get his contractual situation with Dan Goossen straightened out there’s almost no reason talk about this potential mega-fight (unless, of course, it’s to taunt the “G-haters”).