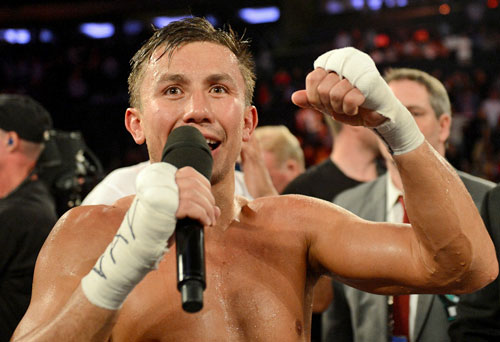 Jennings-Perez: Bryant Jennings escaped with a split-decision victory over Mike Perez but couldn’t hide his limitations on the Golovkin-Geale card. The Philadelphian showed some grit by rebounding from a slow start to have hand raised against a capable opponent, even if a point deduction saved him from a draw. (See Rabbit Punches below.) However, Jennings (19-0, 10 KOs) looked very much like a fighter who took up the sport at an advanced age and is still a work in progress. Perez was schooled in the Cuban amateur system, which means he’s a good boxer who can give most opponents some degree of trouble. He’s nothing special, though. And Jennings struggled much of the fight, looking good on occasion when he set his feet and threw combinations but failing to take charge at any time. Jennings landed only 149 punches (12.4 per round), according to CompuBox. Perez (20-1-1, 12 KOs) was worse. He got off to a good start but seemed to tire and lose all momentum. He landed only 116 punches (9.7 per round). Also, the fact the fight was boring hindered Jennings’ efforts to become a compelling heavyweight. He was anything but on Saturday. Jennings has talked about fighting Wladimir Klitschko, which for him would be like diving into a meat grinder. Instead, he should keep his mouth shut and work hard in the gym to get better. He has a ways to go.

Frankie Gomez: Has the real Frankie Gomez finally emerged? The former amateur star was a sizzling hot prospect when he turned pro in 2010. Former trainer Abel Sanchez raved about Gomez’s talent in 2011, telling RingTV.com at that time that the teenaged fighter had unlimited potential. However, Gomez’s inability to get his act together outside the ring – including legal issues – has hindered his development as a professional. Now 22, he seems to understand that he was allowing a great opportunity to slip away. Gomez (18-0, 13 KOs) looked terrific against former junior welterweight contender Vernon Paris (28-2, 16 KOs) on Friday in Indio, California, pounding his way to a shutout decision victory. Gomez was in shape, strong, focused and as fierce as I’ve ever seen him. He overwhelmed a capable fighter in Paris, although Paris hadn’t fought in more than a year. Still, it seemed clear that Gomez has the potential to become a major factor at 140 and 147 pounds if he can stay focused on boxing.

The timekeeper has one fairly simple job: Make sure each round is three minutes. Not rocket science. The fact Round 1 of Golovkin-Geale somehow lasted four minutes boggles the mind. I hope officials in New York – who should be embarrassed – determine exactly what happened and take steps to make sure it never happens again. ÔÇª Speaking of mistakes, Geale apparently tripped in the first round when his foot became entangled in a photographer’s camera strap. Seriously? He could’ve been injured. Photographers also have a simple job in terms of fighter safety: Stay out of the way. The fact this one was unable to do so was inexcusable. Officials should require that straps remain around the photographer’s neck or in his or her camera bag at all times. And, going forward, any photographer who comes in contact with a fighter should be denied a credential for one or two fights. That would send a strong message. ÔÇª

The decision of referee Harvey Dock to deduct a point from Perez for punching on the break became the story of the Jennings-Perez fight. I wouldn’t have taken a point away because I don’t think it was egregious enough. However, I don’t think Dock’s decision was egregious either. He did yell STOP two or three times before Perez threw the punch in question, which is grounds for a point deduction. The unfortunate result was that it turned what would’ve a draw into Perez’s first loss. No one wants to see a referee play a role that significant in any fight. ÔÇª Roy Jones Jr. (58-8, 41 KOs) stopped someone named Courtney Fry (18-6, 6 KOs) on Saturday in Riga, Latvia. It was his fourth consecutive victory over obscure opponents. I presume Jones, 45, is getting paid decently to fight in Eastern Europe. Still, those who admired him when he was at his best look forward the day he says enough is enough.