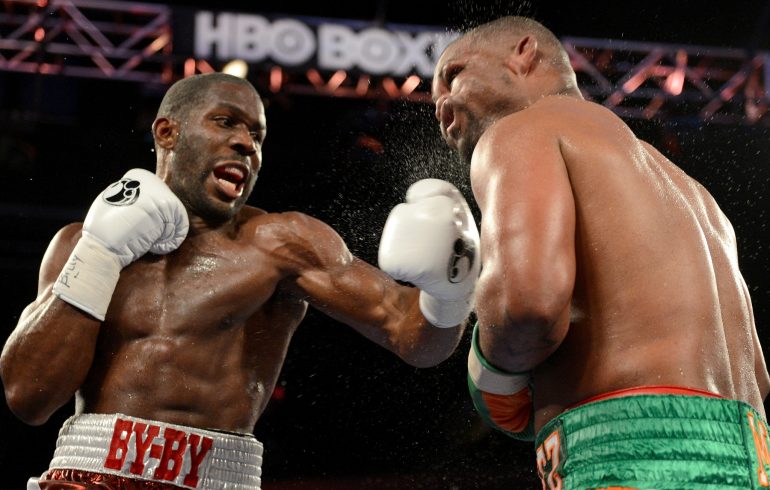 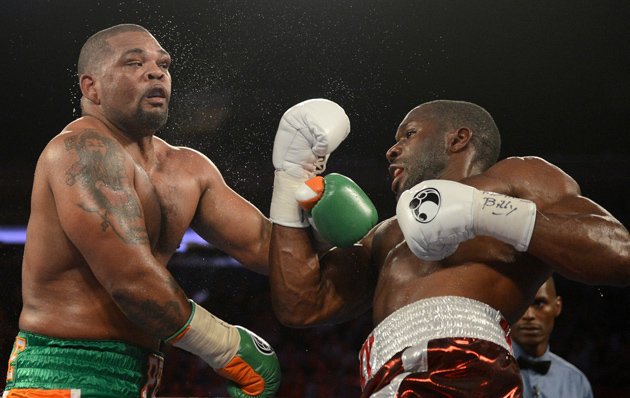 NEW YORK, N.Y. – Adam Booth made it a point to come over and congratulate Bryant Jennings, who had just beaten his fighter, Mike Perez, on Saturday at Madison Square Garden. Booth also mentioned something few knewÔÇöas he walked out the door, “You beat a fighter that’s had over 400 more fights than you’ve had.”

The process continues. So does the trust. Jennings haw 36 fights as an amateur and a pro, while Perez had over 400 with his extensive amateur background.

But afterward, Jennings seemed content, though not overly excited about his biggest pro victory to date. He wanted to put on a showÔÇöbut Perez, who came in at 242, 11 pounds heavier than his previous fight, wasn’t exactly willing to cooperate.

Perez grabbed, hugged, smiled, and by the seventh round, looked enervated.

Jennings can be especially hard on himself. The 29-year-old will analyze and re-analyze what he did wrong.

“I know I have to start faster and it’s still a learning process; I’ll evaluate everything and we’ll go from there,” Jennings said. “At least I came out with the win. I’ll go over some things with my team on what I need to improve. I’m satisfied with the winÔÇöbut with everything else, I don’t know about. It was a tough fightÔÇöI was waiting for him to attack. I thought he would come forward. I thought he would attack. That threw me.”

It threw off Jennings so much that he had to scuttle his original fight plan and re-invent a new one.

“I didn’t watch any tape on him, but that’s part of the learning process,” Jennings admitted. “I know the correct steps to take in the future. I know I have to do the studying and the proper way of evaluating a fighter before I fight him. He never bothered me. I never looked at him in his eyes. He was a southpawÔÇöand I have to trust my jab and my reach and I didn’t do that at all times. I need to listen to my corner. It’s something we’ll work on. I have to start fasterÔÇöI have to work on that, too.”

With 1:59 left in the 12th, referee Harvey Dock took a point away from Perez for hitting Jennings, pressed against the ropes, on the break. That proved to be the difference on judge Feldman’s card, which had Jennings winning five of the last six rounds.

“I think he underestimated me,” Jennings said. “I had a different plan going into the fight. I went into the fight with the intention of pressuring him, but he wouldn’t let me pressure him and show my inside game. I let his conditioning play a part. I was working and I thought he was getting tired. But it went so fast. It felt like an eight-round fight.”

As Perez tried wrestling Jennings in the 11th, the Philly heavyweight, who came in at 222 pounds, snuck in a right uppercut that caught Perez’ attention. By the end of the round, it was more hugging and holding.

Jennings hurt Perez with a right to the chin in the eighth. He caught Perez perfectly as he was coming forward after an exchange. For a moment, Perez appeared stunned. But Perez couldn’t lift his arms, which probably left like two logs. He tried crowding Jennings against the ropes to no avail. He smiled again when Jennings connectedÔÇöbut though it might have scored points in his mind, it did little to help him on the scorecards.

In the seventh, Perez appeared spent. He grinned and leered at Jennings more than he threw punches. Jennings kept with the same tactic, boring in, picking apart Perez to the body, and occasionally going upstairs to the head. After giving up the sixth, Jennings came back to claim the seventh. A Jennings’ left hook was his most punishing punch, so far.

Dock warned Perez about lowering his shoulder in the sixth, a tactic Dock broached with the Cuban expatriate in the third round. But Perez, sensing he had to increase his work rate, seemed to be slightly more active than Jennings in the sixth.

By the fifth, Perez left eye began to swell. He tried to cleave Jennings’ high guard, sometimes with success. But with roughly :20 left in the fifth, Jennings opened up with a combination that had Perez backing up.

In the fourth, Perez began to drop his handsÔÇöpossibly from fatigue. He managed to connect with a right to the body, but mostly relied on one punch at a time. Jennings, meanwhile, began growing in confidence. He began coming forward, and in the last 10 seconds of the round, Jennings plowed Perez with a right to the face.

The action picked up in the third round. Jennings, with his guard high, began leaning into Perez, who resorted to dipping and attempting to push Jennings back with his shoulder. Jennings landed some powerful shotsÔÇöone in which Perez reacted with a smile. Still, it was Jennings’ best round, though neither fighter appeared to take control.

In the second round, Perez was the more assertive fighter. Though Jennings landed a few counters, it was Perez circling and showing more aggression.

There was nothing going on in the first round. Neither fighter did anything. But there was one distinctionÔÇöPerez had some jiggle to his middle. He came in at 242 against Jennings, 11 pounds more than he weighed against Carlos Takam in a majority draw back in January.