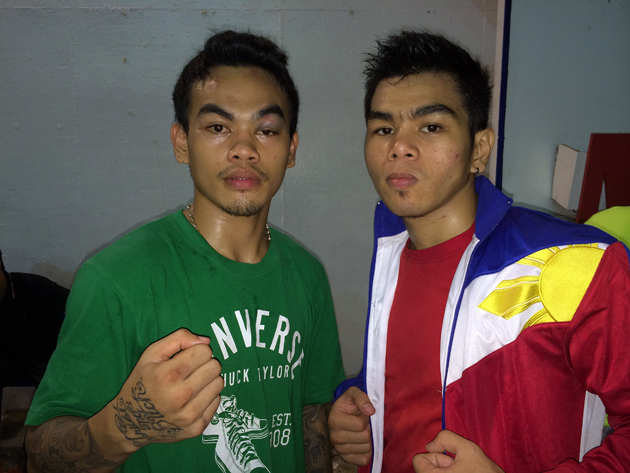 Featherweight Dodie Boy Peñalosa (13-0, 12 KOs) had little to worry about with Amtiran (3-9), who was brought in on short notice after the original opponent withdrew a week ago after losing three straight. Peñalosa looked physically imposing from the start, lording over his smaller, timid opponent with his southpaw right jab and straight lefts.

Midway through the first round Amtiran appeared to get hit in the eye and went down on his own accord to regroup. He rose up but it was clear that he was no match for the larger Peñalosa.

Peñalosa beat Amitiran around the ring with flush straight lefts that penetrated his guard routinely. A series of body shots sent Amitiran to the floor once more in round 3 for the count, ending the bout at the 1:14 mark.

“We just observed in the first round, used our jab to get the distance. He’s not in my division and I know I had the advantage,” said Peñalosa Jr, who says he will return to University of the Visayas next semester for his final semester to obtain a Bachelor of Mechanical Engineering degree.

Dodie Boy, who was raised in Cebu City, Philippines, is also hoping that his future holds a fight on the undercard of Manny Pacquiao’s next bout against WBO junior welterweight titleholder Chris Algieri on Nov. 22 in Macau.

Dave Peñalosa, meanwhile, looked on his way towards an uneventful victory over Danilo Gabisay in the early goings of their junior featherweight bout. Peñalosa had controlled the first two rounds with his southpaw right jabs and right hooks.

Nearing the end of round three, with Peñalosa stationary looking to set up another right hook, Gabisay uncorked a straight right hand that caught Peñalosa straight on the chin, knocking him down for the first time in his career.

“I felt shocked,” said Peñalosa (9-0, 6 KOs). “I was off-balance and he caught me with a straight right hand right on my chin. I was hurt a little bit.”

With uncle Jonathan Peñalosa and father Dodie Boy Sr in the corner, Peñalosa regrouped and heeded their advice to remain focused. The guidance paid immediate dividends.

Two minutes into round four Peñalosa stunned Gabisay with a straight left to the chin, sending him into the ropes for a knockdown of his own. Moments later Peñalosa scored a second knockdown, this time with a right hook.

With his opponent weary, Peñalosa stalked out of the corner to finish him off, accomplishing so with a straight left cross to the body. The referee reached the count of ten at 1:23 of round five.

The victory made Dave’s father and uncle proud.

“He proved that he has heart,” said Dodie Boy Peñalosa Sr, a former IBF junior flyweight and flyweight champion. “He’s a hard puncher, has talent, courage. Now I believe he can become a champion.”

“That’s awesome, that’s the kind of performance I want to see from him,” said Gerry Peñalosa, the event’s promoter. “He was tested tonight and we know he has the heart, the talent and the power.”

The main event promised plenty of action with former featherweight title challenger Bernabe Concepcion and former Philippine bantamweight champion Eden Sonsona. Both entered with identical 32-6 records and hadn’t fought in over a year. The winner would likely get a call from an international promoter for a big fight while the loser would become a stepping stone.

For three rounds the fight delivered until an accidental headbutt left Concepcion compromised with a bad gash on his right eye. The referee stopped the fight and rendered the bout a technical draw.

This was the second straight Sonsona (32-6-2, 10 KOs) fight that has ended prematurely due to an accidental butt; nearly a year ago to the day his bout with Daniel Ferreras was terminated in the fourth round due to a cut on Ferreras’ head.

Concepcion (32-6-2, 18 KOs) was looking to win his third straight bout in his first fight since April of 2013. The 26-year-old from Virac, Catanduanes, Philippines had at one time been a mainstay of Pacquiao undercards and had twice challenged for the WBO featherweight title in losing efforts.

“I really want that fight to last the distance because I know they were enjoying it. They both gave their best so for sure there’s a rematch,” said Gerry Peñalosa. “I’m thinking September 21.”

Pumicipic was last in the ring in March, losing a majority decision to Ryosuke Iwasa in Japan for the OPBF bantamweight title. Pumicpic relied on body work early to slow down Olisa (10-25-1, 8 KOs) and scored with lead left hooks and jabs to outpoint his durable foe.

Jiffy Castaneda, a 30-year-old Tarlac, Philippines resident, scored the second victory of his career, knocking out Rodolfo Salas (0-4) in round three. Castaneda, a used car salesman, says he came to boxing two years ago to overcome his addiction to poker. After losing 100,000 pesos (approximately $2300 USD) over two nights, he decided to try his luck in the ring.