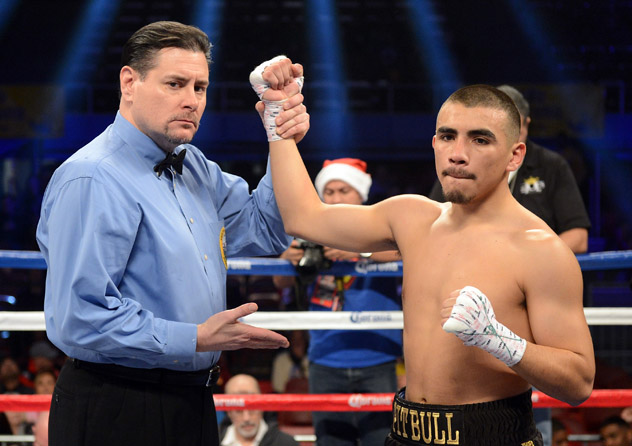 Alternating from orthodox to southpaw, junior welterweight Frankie Gomez dropped his man with a left hook in the fourth round and dominated Vernon Paris throughout the evening in Friday’s “Golden Boy Live!” main event at Fantasy Springs Resort Casino in Indio, Calif.

If Gomez (18-0, 13 knockouts), who had stopped five of his previous six opponents, wasn’t hammering away at Paris (28-2, 16 KOs) with fierce body shots, then he was drilling home vicious, pinpoint uppercuts.

Gomez won by a shutout on all three judges’ cards, 100-89, out-landing Paris by more than two to one (215-to-106). For Paris, a two-fight winning streak since falling by ninth-round stoppage to Zab Judah in March 2012 was ended.

“I was just thinking that I’m going 10 rounds, so pace myself, work the body, and it turned out pretty good,” said Gomez, 22. “I didn’t want to go in for the kill.

“I didn’t look for the knockout. He got dropped, and he got back up and finished the 10 rounds. I had some time off, ran into some problems, but I’m a little older and a little bit wiser now, so I’m thinking more of just boxing now. I have been sparring with good people, and I’ll fight whoever. It doesn’t matter.”

In an earlier bout, light heavyweight Vyacheslav Shabransky (10-0, 8 KOs) scored three knockdowns during a 48-second knockout of Demetrius Walker (7-6-1, 4 KOs), one knockdown the result of the first punch of the fight.

Middleweight prospect Antoine Douglas survived some treacherous moments in the eighth and ninth rounds of a 10-round majority draw with Michel Soro on Friday’s telecast of “ShoBox: The New Generation” from Verona, N.Y.

“In the first rounds, I was stressed because I wasn’t at home. I relaxed in the fourth and fifth rounds, and I was never hurt,” said Soro. “I know experience was the difference down the stretch. I need to be more precise and accelerate what I was doing in the eighth. This is not my real weight, and I am better than that.”

“I feel bad. After the first couple of rounds, I wasn’t feeling myself,” said Douglas, in a statement from Showtime. “I would like to fight him again. I had to respond and find myself in the eighth round, but I made it through to the end.”

In the super middleweight co-feature, Jerry Odom (12-0, 11 KOs) survived a severe cut over his left eye and dropped his man with a right hand once in the fourth round and again for a seventh-round knockout of Vilier Quinonez (8-1, 5 KOs). Referee Charlie Fitch waved off the bout at the 2:25 mark.

In other bouts, welterweight Cecil McCalla won a unanimous decision over Oscar Godoy, and lightweight Tony Luis did the same with Wanzell Ellison.

In the middleweight co-feature of the an ESPN “Friday Night Fights” event, middleweight Caleb Truax (24-1-2, 14 KOs) survived a cut over his right eye in the final round of a 10-round unanimous decision over Derek Ennis (24-5-1, 13 KOs).

In the light heavyweight opener, Mike Lee’s nose was bloddied in the fifth round but he went on to score a six-round majority decision victory over Paul Gonsalves.

Welterweight Jose Benavidez (20-0, 14 KOs) and Henry Aurad (16-8-1, 13 KOs) weighed 145.8 and 146 pounds, respectively, in advance of Saturday’s fight at The Celebrity Theater in Phoenix, Arizona, which will be televised on UniMas.