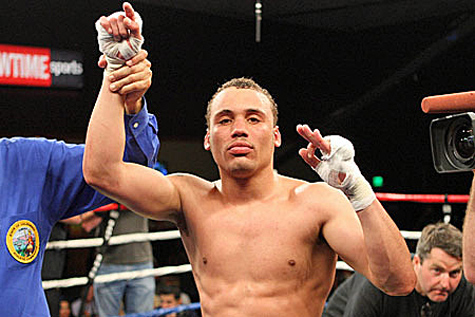 Vernon Paris admits to being a cocky 24-year-old when he faced a fighter 10 years his senior in former titleholder Zab Judah in March 2012.

“Leading up to the Zab Judah fight, I was an unfocused fighter. My discipline wasn’t too good,” said Paris. “I had a lot of personal issues that I was letting bother me outside of the ring…but even though I had a raggedy camp, I thought that I couldn’t lose.”

Although Paris had vowed to make Judah’s age a factor, the previously undefeated fighter was viciously beat down en route to a ninth-round stoppage loss.

But Paris (28-1, 16 knockouts) contends he will be a different fighter in Friday’s 140-pound fight against Frankie Gomez, a “Golden Boy Live!” main event at Fantasy Springs Resort Casino in Indio, Calif. on FOX Sports 1 and FOX Deportes.

“Nowadays, I’ve gotten rid of all of the outside problems and issues and Kenny Johnson and Johnny Gant are two amazing coaches and they’re also two amazing friends,” said Paris, who has won his last two bouts.

Gomez, 22, is 17-0 with 13 knockouts, including stoppages in five of his past six fights. Gomez will be after his third consecutive knockout victory when he faces the extremely confident Paris.

Paris will be ending a 14-month ring absence, having last been in action for a unanimous decision over Manuel Perez in May 2013 that followed a third-round knockout of Guy Packer two months earlier.

“There was a time where I fell out of love with the sport and didn’t have respect for the sport but things have changed these last few years,” said Paris. “I’m in love with the sport again and I’m focused. We’ll see what will happen after this fight. I’m going to go ahead and knock this dude out and look good doing it and take it from there.”

Johnson has seen the change in Paris.

“I wasn’t his trainer for Zab Judah. I took over after that fight. So I’ve been with him for two fights and I can say that his mental approach has changed and his thinking outside of the ring has changed. He’s more focused and I think that he’s starting to show signs of maturity. I really didn’t have a relationship with him before this but taking into consideration what people said, the things that he was doing and what he was involved with, it’s been none of that. It’s been strictly training and all business,” said Johnson.

“As far as his performance, that remains to be seen and this is a test. I haven’t really watched a lot of Gomez but the little bit that I did see of him, I think that he’s just an average fighter. I mean, I think that he’s got decent skills but I don’t see nothing special about him. The factor going into this fight is that we know that we’re fighting a tough opponent but this is a step-up fight for Gomez. We’ve been here before. Our opposition’s been a whole lot better than his opposition has been. So this is more of a test for him than it is for us.”

Paris has more or less relocated in order to take boxing more seriously.

“My mother stays in Florida, so I go down there to see her from time to time but I’m moving into my own place in Atlanta. That’s where I want to stay, where coach Kenny’s going to be and I want to constantly perfect my craft. I’m 26 years old, going on 27,” said Paris.

“I don’t have the time that I used to have to wait any more. I’m in a very rich weight class that has a lot of amazing fighters in it, and right now, I’m hoping that this fight right here will shoot me into a real good fight with an Adrien Broner or any of them guys. But I’m focused on this one fight because it means a lot to my career.”