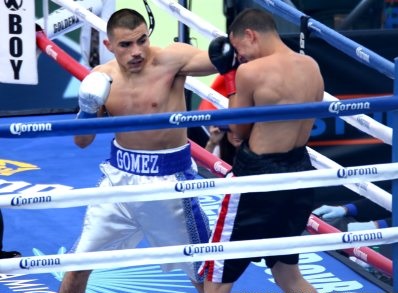 Boxing fans in Southern California will have many options on where to catch a fight card on Friday night.

Boxing returns to the Coachella Valley of Southern California as Golden Boy Promotions presents a main event between two junior welterweight standouts. Unbeaten Frankie Gomez will face Vernon Paris in a 10-round bout at the Fantasy Springs Resort Casino in Indio.

Gomez (17-0, 13 KOs) is coming off a second-round knockout over Orlando Vazquez on April 26 in Carson, Calif. The East Los Angeles resident had his career stall in early 2012 following brushes with the law in the Los Angeles area.

However, Gomez has demonstrated he’s serious to live up to the high expectations the promotional company have for him by having trainer Freddie Roach in his corner.

Paris was scheduled to fight Cleotis “Mookie” Pendarvis earlier this year in the Los Angeles suburb of Montebello, but the fight fell through, reportedly because Pendarvis was having issues with weight. In his last bout on May 10 of last year, Paris struggled to win a 10-round unanimous decision over Manuel Perez in Detroit, Mich.

About 90 miles west on Interstate 10, Thompson Boxing Promotions presents another “Locked ‘N Loaded” card at the Doubletree Hotel in Ontario.

In the main event, Efrain Esquivias will fight Christopher Martin in a 10-round bout.

It is a crossroads bout between these Southern California-based junior featherweights, but will be fighting at the featherweight limit for this fight. A loss would all but destroy any return to contender status.

Esquivias (17-3-1, 10 KOs) scored the biggest win of his career on Sept. 6, when he knocked out former champion Rafael Marquez. Unfortunately, Esquivias was not able to follow up on the win, losing an eight round majority decision to Ruben Tamayo on April 25 in Ontario, Calif.

Martin (27-3-3, 9 KOs) had a four-bout winning streak snapped in his last fight on October 18, losing a one-sided eight round unanimous decision to Enrique Quevedo.

In the co-feature bout, Carlos Carlson fights Jose Cen Torres in an eight-round bantamweight contest. Carlson (14-0, 10 KOs) will defend his regional title belt he won against Javier Gallo on Feb. 28.

Four more bouts round out the card.

Junior lightweight Aaron Garcia of nearby Vista will fight Daniel Ramirez (10-1, 4 KOs) in an eight-round bout at the Crowne Plaza Hotel in San Diego.

Garcia (14-3-2, 4 KOs) has won his last four bouts in a row since losing controversial back-to-back losses to Abraham Lopez and Bernabe Concepcion in 2011.

Ramirez had fought his first 10 bouts in his hometown of Tijuana, Baja California, Mexico. In his last bout on April 5, Ramirez traveled to Brook, in Northern California, where he lost a six round unanimous decision to Guy Robb.

Four more bouts will round out the card.