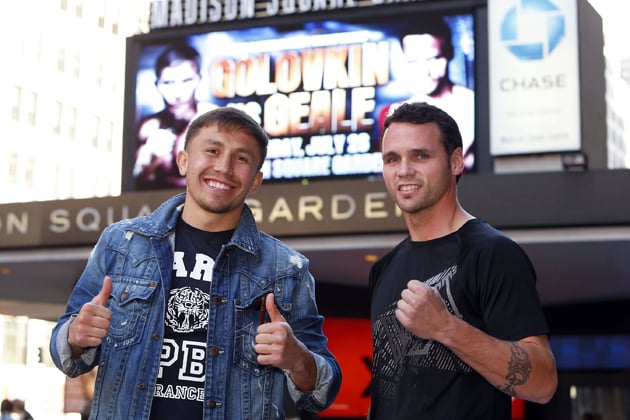 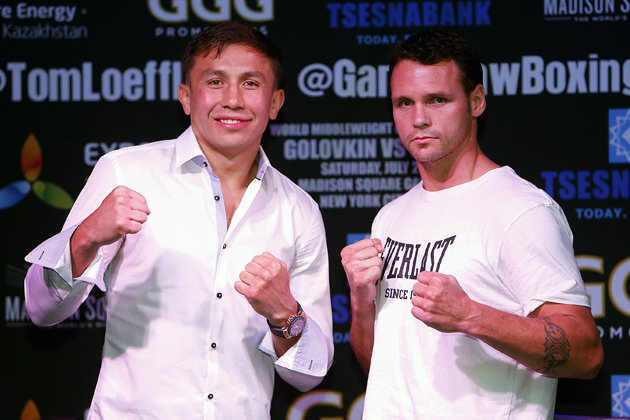 Gennady Golovkin will be after his 17th consecutive stoppage victory on Saturday against former titleholder Daniel Geale, and there are few who doubt he will get it.

An Olympic silver medalist from Kazakhstan who appears to be in his most difficult challenge to date, Golovkin (29-0, 26 knockouts) will defend his WBA middleweight title at New York’s Madison Square Garden against Geale (30-2, 16 KOs), who is almost certainly facing his most formidable adversary.

Geale’s best chances appear to hinge on whether he can summon the fortitude he has shown at least three times prior.

Geale, 33, also demonstrated resolve in avenging his lone defeat at the time with a unanimous decision over Anthony Mundine in January 2013. But as a result of electing to face Mundine instead of Golovkin, 32, Geale was forced to give up the WBA belt and then lost the IBF title to Darren Barker in August 2013.

[Note: THE RING began recognizing Golovkin as the WBA titleholder in 2012; Until that point he held the WBA “World” title while the WBA “Super World” title was held by Sturm. When Geale beat Sturm and was subesquently stripped, Golovkin’s belt assumed top status.]

Golovkin, meanwhile, further enhanced his reputation as a fearsome puncher in 2013 and was selected by readers as the Fighter of the Year with his stoppage wins over Gabriel Rosado, Nobuhiro Ishida, Matthew Macklin and Curtis Stevens.

“It will be interesting to see what Daniel Geale does at the beginning of the fight. Will he box or try to outbox Gennady Golovkin when the Kazakh fighter cuts off the ring?” asked Francisco Salazar of RingTV.com.

“Golovkin will stun Geale during the early rounds but the Aussie fighter will remain composed. I predict there will be some very good exchanges during the fight, enough to where the crowd stands on its feet.”

Whether or not Geale remains standing, in victory or defeat, remains to be seen. RingTV.com sought the opinions of 23 insiders as to what will transpire in Golovkin-Geale.

Gennady Golovkin TKO 11 Daniel Geale: This should figure to be Gennady Golovkin’s toughest test to date but one in which he emphatically proves he’s the best middleweight in the world.

But the business grinds on and so will the “GGG” machine. Geale is better than many think. He’s no Curtis Stevens or Gabe Rosado. The Aussie’s skill set is thorough and competent yet not special in any one aspect.

Still, he’s smart, stubborn and durable. He’ll last a little longer than most but Golovkin’s heavy hands are a force that nobody has eluded and many are avoiding. It might happen later but in the end, it will be Golovkin as usual.

Gennady Golovkin TKO 8 Daniel Geale: Let there be no doubt that Daniel “Real Deal” Geale is the most qualified middleweight contender to step into a boxing ring with Gennady “GGG” Golovkin since “Triple G” grabbed the WBA title in 2010 and started defending it against second-tier opposition.

Geale is the first world-class, “step-up” opponent for Golovkin, and that’s the real deal. Unfortunately for the smallish Geale, so too is Golovkin for real. Beyond the appearance of being undersized, the brave challenger has a few other problems that should prove painful and quite insurmountable. First and foremost is the fact that the gutsy Australian’s style plays right into the heavy hands of Golovkin.

Geale talks about a fight plan that includes not being as easy to hit as past GGG victims but that claim belongs in the category of “believe it when I see it.” The way it looks to me now, Golovkin has too much size, power and skill for Geale. Some time in the second half of the fight, Geale’s head will disappear into deep water and the referee will save him from drowning.

Gennady Golovkin KO 5 Daniel Geale: Daniel Geale is THE RING’s number two-rated middleweight and arguably the finest fighter that Gennady Golovkin will have faced. The rugged Australian has never been stopped, rarely gets hurt in a contest and he is coming to win.

The problem is that statistics go out the window when you’re facing Golovkin. Geale may last longer than what I’ve predicted but the clock will be ticking on his fate from the moment the first bell rings. No middleweight on earth can survive GGG and “Real Deal” Geale doesn’t possess the power to keep him off. 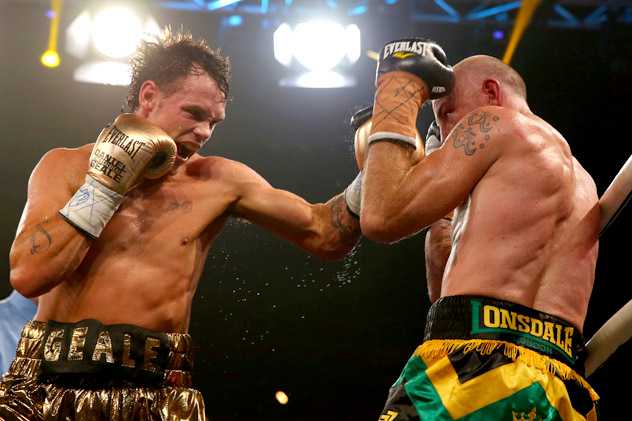 Gennady Golovkin TKO 9 Daniel Geale: If Daniel Geale is to pull off the upset, he must return to the principles that helped him win not one but two middleweight title belts in Germany against German champs: volume punching, well-delivered combinations and savvy mobility.

Points are the key. However, even if he succeeds, he doesn’t have the huge punch to earn Gennady Golovkin’s respect. It will take a while but Golovkin will methodically hunt down the Australian by cutting off the ring, slamming in body shots and pouring on the pressure to register his 17th-straight KO.

Gennady Golovkin TKO 7 Daniel Geale: Is there any reason to think that Gennady “GGG” Golovkin will not collect his 17th consecutive knockout against Daniel Geale? At this point, it’s more about Golovkin making an example out of his opponents than anything else.

Geale will be the latest brick in the frightening trail of devastation that Golovkin has delivered over the course of his career. The best Geale can do is fight from a distance and stay out of Golovkin’s wheelhouse. But that isn’t the type of fighter Geale is.

Geale is a pressure boxer who looks to land to the body. It won’t work against GGG, who is an excellent counterpuncher with debilitating power in both hands. If Geale doesn’t fall, this fight will get stopped to save him from a brutal beating.

Geale isn’t a huge puncher or a textbook technician but his awkward style and toughness should enable him to last longer than most with Golovkin. Eventually, though, he’ll pay for his bravery against one of boxing’s most punishing punchers.

Gennady Golovkin KO 5 Daniel Geale: Even though Gennady Golovkin is no spring chicken, he is is still getting better. That spells bad news for everyone in the division because GGG’s extraordinary power already gives him a big edge over everyone else.

Daniel Geale is an acceptable opponent, clever enough to make it a fight for awhile but not too long. Golovkin’s shocking power is simply not normal and I don’t see anybody out there who can take it. Geale is down and out in the first half of the fight.

Gennady Golovkin KO 6 Daniel Geale: Unless he foolishly depletes himself and goes down to 150-ish pounds for his dream match-up against Floyd Mayweather Jr., Gennady Golovkin is an instant favorite against any 160-168 pound fighter not named Andre Ward.

Geale has all my respect and his win against Felix Sturm proved he is one of the most underrated middleweights out there but Golovkin is in a completely different dimension in terms of energy, motivation, power and overall talent.