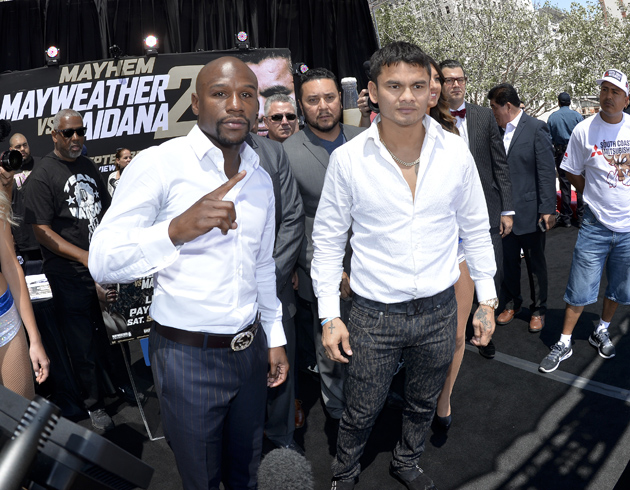 LOS ANGELES – From the moment they left the ring inside the MGM Grand in Las Vegas on May 3 until recently, there is little Floyd Mayweather Jr. and Marcos Maidana agree on.

From social media to media roundtables, both agree to disagree on what happened in the first fight and on what will happen on when they square off again on Sept. 13.

Each thought they did enough to win in their first fight on May 3.

Each has their own opinion on which gloves Maidana should wear in the rematch.

Both accuse the other of using roughhouse tactics to gain an unfair advantage.

Going on what both left in the ring in their first fight and the recent war of words, Sept. 13 may produce more fireworks and intrigue.

That is if one major issue gets ironed out. That glaring issue has been the gloves Maidana has worn for most of his recent fights. Maidana wanted to wear a customary pair of Everlast MX gloves on May 3, but Mayweather balked after the Friday weigh-in. Hours before the fight, Maidana agreed to wear a different pair of Everlast gloves.

Both camps reportedly have not ironed out any agreements on the glove issue and both are adamant in what they want.

Believing Miguel Cotto and Saul “Canelo” Alvarez were tougher and stronger foes, Mayweather alleged Maidana’s high knockout percentage is due to wearing the Everlast MX gloves, which he deemed illegal.

“I just want an even playing field,” said Mayweather, when asked about the gloves. “He has so many knockouts, but those types of gloves (Everlast MX) have no padding. He says he beat me in the first fight. He should wear those same gloves again if he’s so sure he beat me. He’s strong, but beat me the honest way.”

Mayweather (46-0, 26 knockouts) made a point to complain about what he called illegal roughhouse tactics on Maidana’s part.

He went as far as to say that Maidana should fight in mixed martial arts or in the rouge bare-knuckles boxing circuit.

While Maidana (35-4, 31 KOs) admitted he will implement certain adjustments in preparation for the fight, Mayweather is not sold it will help Maidana on fight night.

“He cannot fight any better than in the first fight,” said Mayweather, who will be fighting in the fourth fight of a six-bout deal with Showtime. “It was an easy fight the first time. I’m not making any adjustments. He’s the one that has to make adjustments. All I know is, come Sept. 13, I will be sharp as a razor.”

“He’s a dirty fighter,” Maidana said of Mayweather. “The referee (Tony Weeks) didn’t say anything to him. He has always had a history of using his elbows, and against me, he would use his elbows up against my throat.”

If the five-city, three-day press conference spurred more interest in an already-intriguing fight, then both fighters and their respective camps did their job of selling the fight.

And why not? The stakes are equally as high in this fight, if not more so.

Mayweather believes he will have his arm raised in victory a second time, while the Argentine vows redemption and taking Mayweather’s ‘O’ in the process.

“I realized one thing in the first fight,” Maidana said. “He’s not that great as he was made out to be.”

Francisco A. Salazar has written for RingTV since October of 2013 and has covered boxing in Southern California and abroad since 2000. He also covers boxing for the Ventura County (CA) Star newspaper, Boxingscene.com, and Knockout Nation. He could be reached by email at [email protected] or on Twitter at FSalazarBoxing