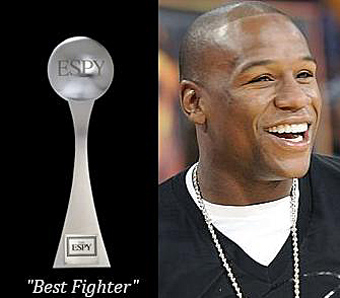 Pound-for-pound king Floyd Mayweather Jr. was named “The Best Fighter” for the sixth time at the 2014 ESPY Awards at The Nokia Theatre at LA Live in Los Angeles on Wednesday night.

Click here for a video of Mayweather and Sharapova.

Mayweather will be in Los Angeles on Thursday along with Maidana to close out a five-city promotional tour in advance of their Sept. 13 rematch at the MGM Grand in Las Vegas. The previous stops on the tour included New York and Washington, D.C., on Monday, and, Chicago and San Antonio on Tuesday.

Algieri is coming off last month’s split-decision over Ruslan Provodnikov that earned him his current belt, this, after having unanimously decisioned Taylor in February. Mayfield is looking to rebound from a unanimous decision loss to Thomas Dulorme in March.