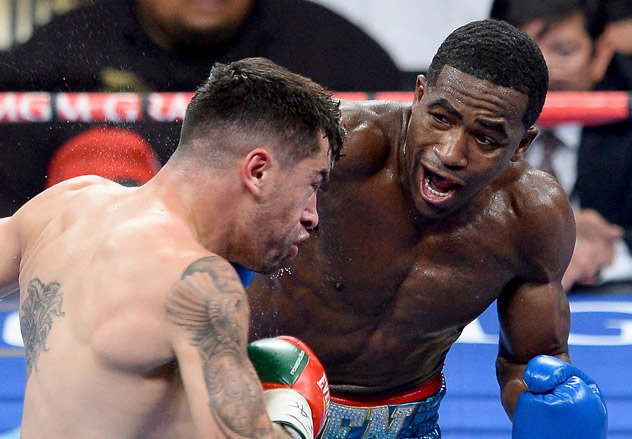 The WBC has voted to lift its suspension against three-division titleholder Adrien Broner in the wake of last month’s apology to the Nevada State Athletic Commission for what were perceived as disparaging comments regarding Hispanic fighter Carlos Molina following his unanimous decision victory over Molina in May.

Broner, 24, had been suspended by organization President Mauricio Sulaiman after stating, “I’ve beaten ‘Afri-CANs’ and I just beat the fÔÇö out of a ‘Mexi-CAN'” during his post-fight interview with Showtime’s Jim Gray.

But during a meeting of the NSAC, Broner expressed regret for his comments.

“I didn’t mean any harm. It was more entertainment. If I hurt anybody with what I said, I’m sorry. I’ll be sure it doesn’t happen again…It’s a maturity thing. I understand where they’re coming from,” said Broner, according to The Las Vegas Review Journal.

“I still want to entertain when I perform in the ring. But I need to be more aware of the things I say from now on. I love performing here in Vegas. What’s in the past is in the past. I’m moving forward and hopefully I’ll be back in Las Vegas to fight again in the near future.”

Sulaiman issued a statement exonerating Broner to RingTV.com on Wednesday.

“The WBC Board of Governors has voted in favor of accepting the public apology presented by Adrien Broner during his hearing at the Nevada State Athletic Commission,” read the statement.

“The suspension which was in place has been lifted and the WBC Ratings Committee has ranked him at number three in the super lightweight division. Mr. Broner, a former WBC lightweight champion, is expected to understand his role in society while being a public figure and as a former champion, represent the organization which believes in human equality, fair play and has an ongoing campaign against bullying.”

Broner and junior welterweight Lucas Matthysse could return to action in separate bouts on Sept. 6 at a site to be determined, according to Stephen Espinoza of Showtime.